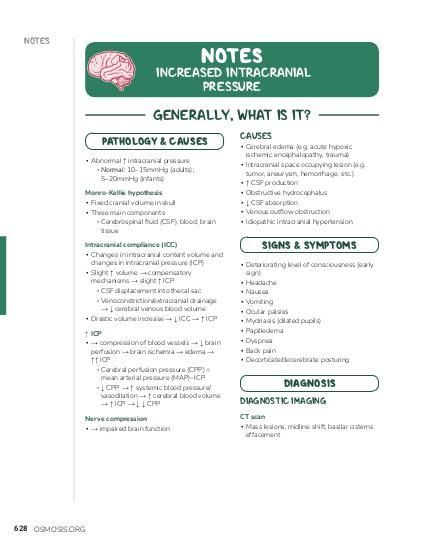 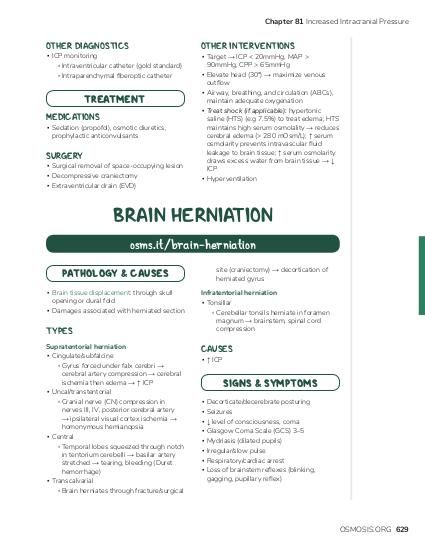 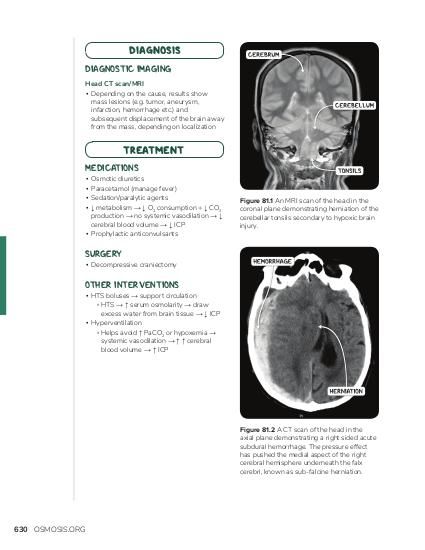 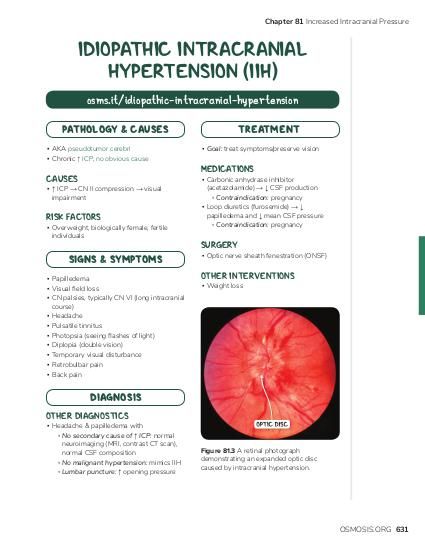 A 35-year-old man is rushed to the emergency department after a severe bicycle accident. His medical history is relevant to chronic anticoagulant use due to a heart valve replacement. Upon his arrival to the emergency department, the patient has a severe headache, ipsilateral hemiparesis, and a progressively deteriorating mental status. Physical exam shows right eye ptosis and right pupillary dilatation with a "down and out" gaze. Before finishing the medical exam, the patient loses consciousness and he is only responsive to deep painful stimuli. His temperature is 36.7°C (98.2°F), pulse is 40/min, respirations are ?/min, blood pressure is 140/70 mmHg. While transferring the patient to urgent neurosurgery, he acquires a decorticate posture and dies. A post-mortem autopsy revealed an extensive midline shift caused by a bleeding mass effect.

According to this diagram, which of the following mechanisms is the most likely cause of death in this patient? 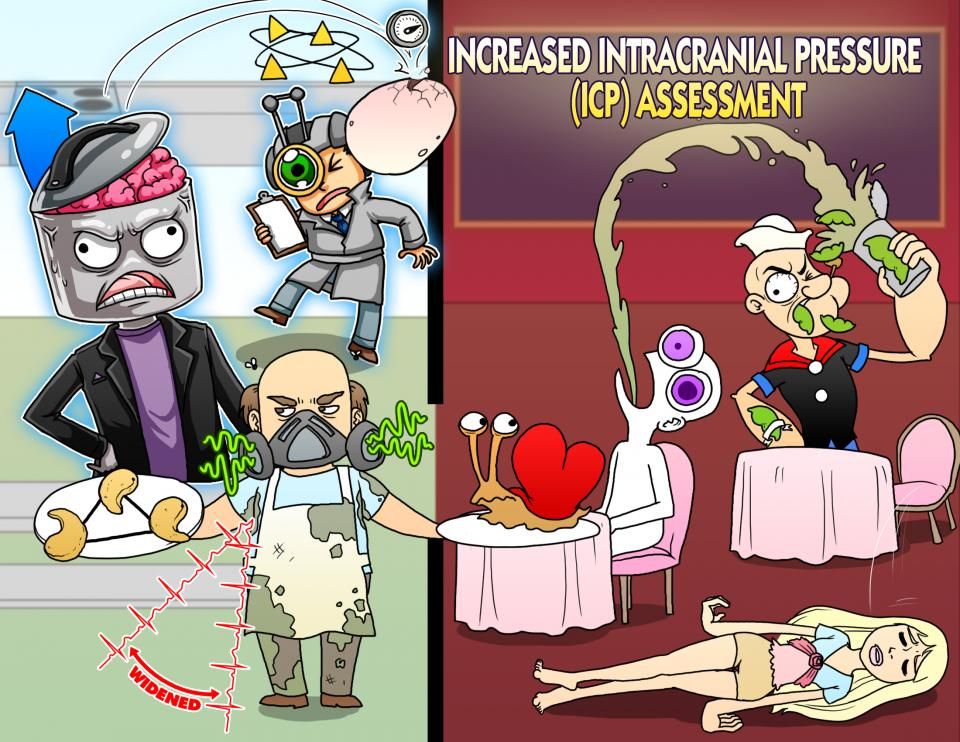 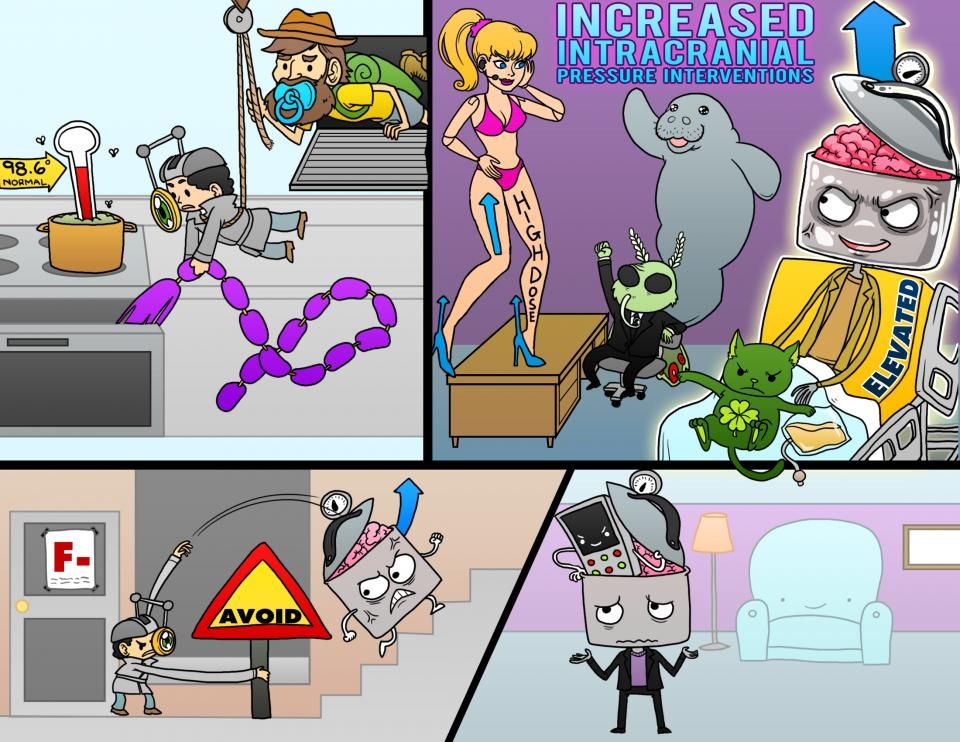 Brain herniation is what it’s called when some brain tissue moves outside of the skull, or moves across or into a structure with the skull.

Brain herniation typically happens in response to increased intracranial pressure, which refers to a high pressure within the skull.

An intracranial pressure above 15 mmHg is considered high.

Now zooming in, the brain and spinal cord is covered by the meninges, which are three protective layers of the brain.

These first two, the pia and arachnoid maters, form the subarachnoid space, which houses the cerebrospinal fluid, or CSF.

The outer membrane is the dura mater, which forms the meningeal folds, such as falx cerebri and tentorium.

The falx cerebri is a meningeal fold that goes down into the longitudinal fissure that separates the hemispheres of the brain.

The free edge of the falx cerebri is in close contact with the central part of the brain called corpus callosum, which connects the left and right hemisphere.

There’s also the tentorium which is a meningeal fold located in the back of our skull, that separates the cerebrum from the cerebellum.

The free edge of the tentorium is in close contact with the brainstem, which is the region that connects the brain and the spinal cord.

The skull has a set volume and the pressure inside of the skull is kept relatively constant.

In other words, the sum of the volumes of the brain, cerebrospinal fluid, and intracranial venous and arterial blood is always about the same. So, if there’s an increase in the volume of any one of these three, there’s a compensatory decrease in the other two.

For example, when a high-speed golf ball hits you in the head, an artery could rupture within the skull.

As the artery bleeds, the blood starts to pool, it leads to what’s called a mass effect within the skull, and that mass effect increases the intracranial pressure.

To help reduce the volume and pressure back to normal, there’s less CSF production and more CSF reabsorption.

Over time, if the arterial bleed continues, then it might overwhelm the bodies ability to compensate, and the intracranial pressure starts to get quite high, and that can lead to brain herniation.

So brain herniation can be caused by either a focal mass effect, like the arterial bleed, or a diffuse mass effect - depending on whether the problem is in one area or involves the entire brain.

In addition to intracranial bleeds, other causes of focal mass effects are tumors and abscesses.

All of these focal masses also create surrounding inflammation which causes local edema, and that makes the focal mass even larger.

Diffuse mass effects are caused by generalized cerebral edema, which is an excessive buildup of fluid throughout the brain tissue.

Some causes of cerebral edema are large ischemic strokes and meningitis.

Depending on the size and location of the mass effect, there’s a possibility of brain herniations - and it can either be supratentorial and infratentorial herniation.

Alright, so supratentorial herniations include four types of displacement and these differ by the exact part of the cerebrum that is affected.

In this herniation, the innermost part of the temporal lobe, called uncus, slips down towards the tentorium and puts pressure on the brainstem.

In oculomotor nerve palsy the eyeball is in a “down and out” position due to a loss of innervation of muscles controlled by the nerve.

Also, the affected pupil becomes dilated and fails to constrict in response to light.

The posterior cerebral artery can also be compressed, which results in ischemic stroke of the occipital part of the brain, which is responsible for processing of visual information. This leads to homonymous hemianopia, which is a loss of vision in either the left or right halves of the visual fields of both eyes.

The vision is lost in halves that are contralateral to the posterior cerebral artery that is affected.

Although there is a partial loss of vision, macular function is spared, meaning that central vision is still sharp and detailed.

This is because the part of the occipital lobe in charge of the macula is gets blood from both the posterior cerebral artery as well as the medial cerebral artery.

Uncal herniation stretches and sometimes breaks branches of the paramedian basilar artery which nourish the brain stem. That causes small linear or flame-shaped hemorrhages called Duret hemorrhages which can be seen on autopsy.

So, let’s say there’s a focal mass effect on the right side of the skull, which increases intracranial pressure and squeezes the uncus down onto the brainstem.