Withdrawal symptoms in a patient with cannabis dependence include .

A 23-year-old man comes to the clinic because of a 5-day history of nausea, vomiting, decreased appetite, and insomnia. His temperature is 37.0°C (98.6°F), pulse is 102/min, respirations are 18/min, and blood pressure is 110/72 mm Hg. Physical examination shows red eyes with no discharge. Complete blood count and liver function tests are normal. Tetrahydrocannabinol is found in his urine. Which of the following is the most likely diagnosis? 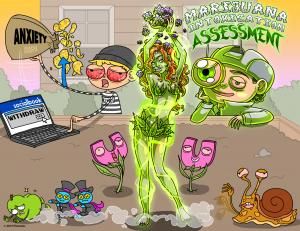 Cannabis, or marijuana, is one of the most popular psychoactive substances worldwide, especially among teenagers.

Although the specifics of cannabis’ addictive qualities are still very much under debate, cannabis dependence disorder is officially classified in the DSM-5 and prolonged, heavy use of cannabis has been shown to cause some level of dependency.

Cannabis comes from the flowers of Cannabis sativa plants, which has oils with concentrations of tiny, fat-soluble, psychoactive molecules called cannabinoids.

For example, THC is associated with high-grade recreational marijuana, and produces effects, like euphoria, analgesia, mild hallucinations, and an increased appetite.

Cannabidiol on the other hand does not have psychoactive effects and is commonly included in medical marijuana because it has a variety of effects including being analgesic, anti-inflammatory, anti-seizure, appetite stimulating, and anxiety-reducing.

To understand how cannabis works, let’s zoom in on a synapse of the brain to see how a stimulus response is induced generally, without drugs.

Normally, electrical signals, or action potentials, travel down the axon to the axon terminal, triggering the release of chemical messengers called neurotransmitters from synaptic vesicles into the synapse.

After the neurotransmitters have done their job, they unbind from the receptors and can simply diffuse away, be degraded by enzymes, or be picked up by proteins and returned to their release site in a process called reuptake.

When cannabis is consumed, the cannabinoid compounds it contains bind to cannabinoid receptors which are found in the central and peripheral nervous system as well as in certain types of cells, like immune cells.

The receptors are normally stimulated by endogenous cannabinoids, also called endocannabinoids, that naturally occur in the body.

A real-world example is the “runner’s high” phenomenon, in which an endocannabinoid called anandamide is released during strenuous exercise, making the runner feel less anxious.

The way it works is that anandamide is released from postsynaptic dendrites, and it diffuses retrograde, meaning backwards, to the presynaptic terminal, where it binds to the cannabinoid receptor.

At that point, there are intracellular changes that ultimately lead to a change in the flow of calcium and potassium across the presynaptic cell membrane, which inhibits depolarization.

So, the presynaptic nerve terminals stop releasing neurotransmitters like GABA and glutamate, which reduces neuronal excitability, and this process is called presynaptic inhibition.

Because THC has a similar chemical structure to anandamide, it can bind to cannabinoid receptors and trick the body into producing a similar feeling—minus the hard work of a strenuous run.

In fact, cannabinoids are extremely lipophilic, which means that they easily get into the central and peripheral nervous system and can stimulate receptors for much longer than endocannabinoids, creating a prolonged effect.

Cannabinoid receptor type 1 is mostly found in the central nervous system, and is highly concentrated in areas like the cerebral cortex, cerebellum, hippocampus, basal ganglia, hypothalamus, and spinal cord.

Cannabinol binds to cannabinoid receptor type 1, slowing down activity in those parts of the brain, which results in mild hallucinations, decreased stress, impaired learning and memory, altered movement and coordination, increased appetite, and analgesia.

Activation of the cannabinoid receptor type 1 also activates the body’s endogenous opioid system, releasing dopamine into the nucleus accumbens to produce feelings of pleasure and reward, which explains why the pathway can be addictive.

Now, the pharmacokinetics of cannabis differ depending whether the cannabis is smoked or consumed orally.

The majority of recreational users smoke cannabis via rolled cigarettes called “joints,” as well as in pipes, or with vaporizers.

The cannabis in a joint contains a compound called tetrahydrocannabinolic acid, which has to be heated to become psychoactive THC.

The process of heating actually destroys about a third of the THC, and more is lost with exhalation and sidestream smoke, which is the smoke that leaves from the end of the cigarette or pipe.

So only a fraction is inhaled and absorbed into the lungs.

Inhaled THC goes from the lungs to the bloodstream and gets into the fatty tissues of the brain and body, where it can accumulate.

That’s why the effects of smoking cannabis can be felt within minutes and can last several hours.

“Edibles,” on the other hand, are consumable products that contain cannabis, and they also have to be heated to transform tetrahydrocannabinolic acid into psychoactive THC.