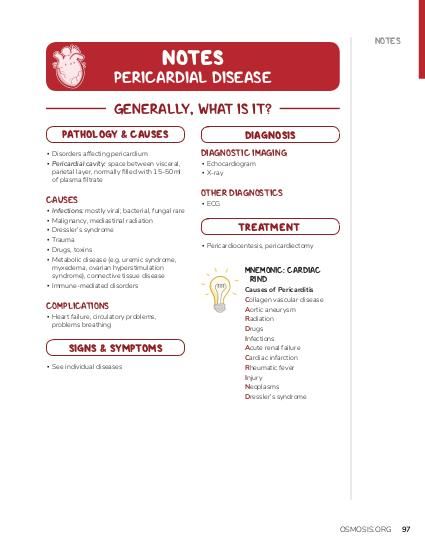 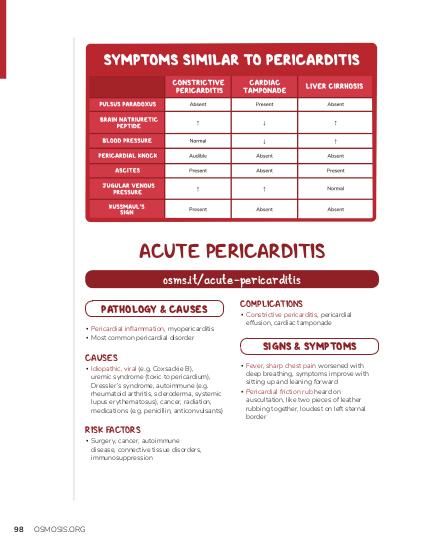 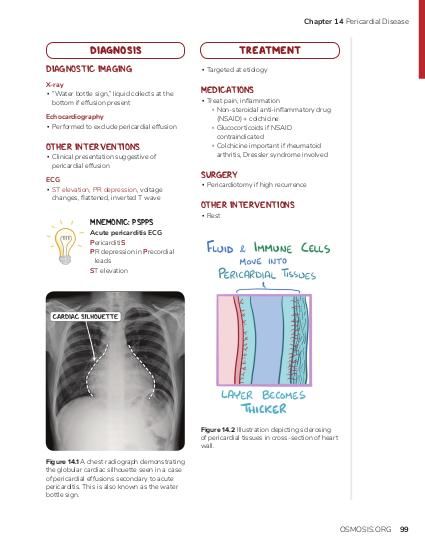 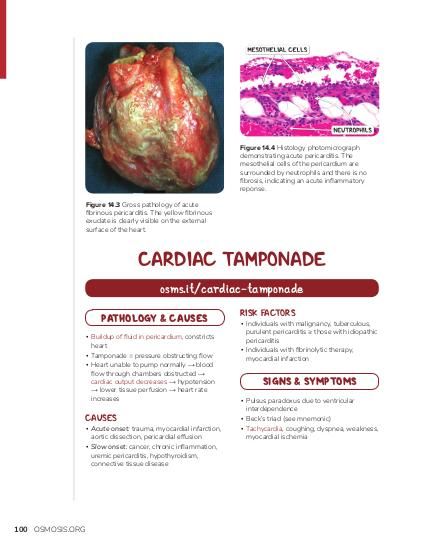 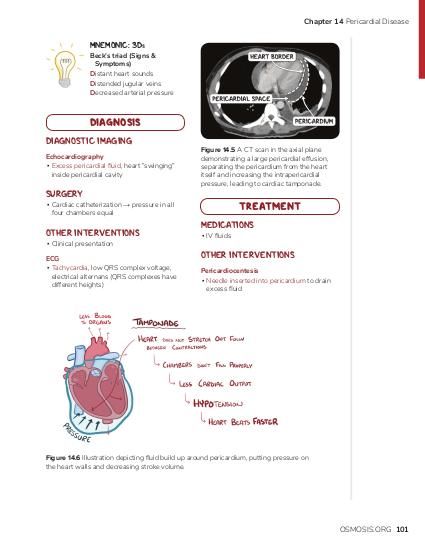 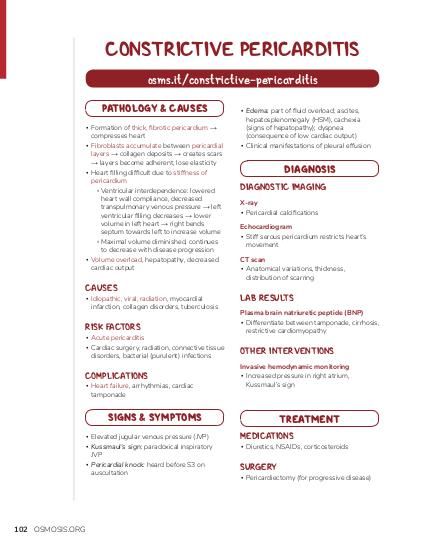 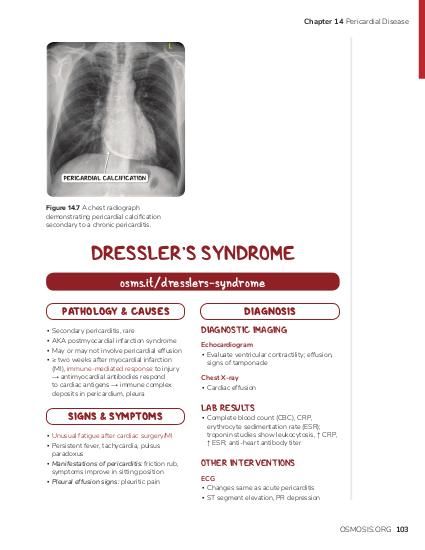 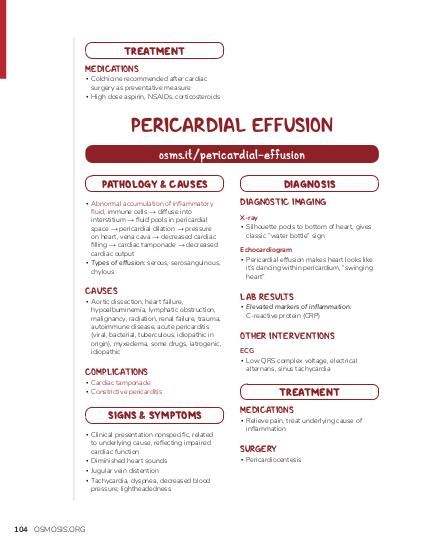 A 32-year-old man comes to a regional trauma center because of a gunshot wound to the chest. Upon arrival, he is hypotensive, tachycardic, and tachypneic. He is pale and shivering and has an initial Glasgow coma scale (GCS) score of 10. The airway is intact and bilateral breath sounds are heard on auscultation. Examination of the neck shows distended neck vasculature, and no tracheal deviation is noted. A nasogastric tube is passed and returns only bile. While finishing the primary survey the patient's blood pressure becomes undetectable and no pulses can be detected. Which of the following is the most likely diagnosis? 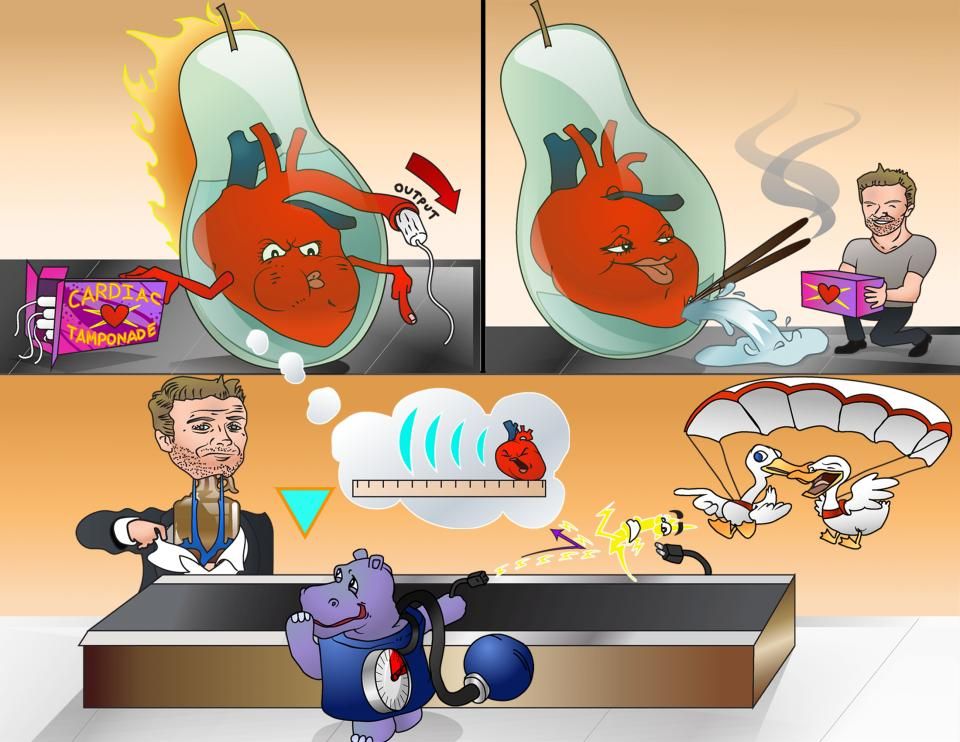 A pericardial effusion happens when this normally protective fluid begins to pool in the pericardial space. It can develop into cardiac tamponade depending on how much fluid there is and how quickly that fluid accumulates.

A rapid accumulation of fluid can occur as a result of trauma to the chest. For example, a stab wound can puncture a blood vessel and fill the pericardium with blood. Even blunt trauma like a steering wheel getting pushed into your chest during a car crash can lead to tamponade, because the force of the impact causes the rupture of lots of small blood vessels. Cardiac tamponade can also happen a few days after a myocardial infarction, because the weak, infarcted ventricular wall ruptures when it’s exposed to the high ventricular pressures. It’s a bit like how jeans might tear at the spot where the denim is worn away and already quite weak. A rare cause is heart surgery, where, once again, a weakened muscle can rupture and cause cardiac tamponade days after the operation. Yet another cause is aortic dissection, which is when blood pools in the actual wall of the aorta. If the aortic dissection ruptures through the wall of the aorta and through the fibrous pericardium, blood can spill right into the pericardial cavity, leading to cardiac tamponade. In these situations, even a small volume—as little as 150 ml!—can lead to tamponade, because the pericardium doesn’t have time to stretch and accommodate it.

Other causes of cardiac tamponade involve more long-term factors, rather than sudden trauma. In these cases, the fluid comes from a chronically inflamed serous pericardium that can’t resorb pericardial fluid as quickly as it builds up. Long-term causes of cardiac tamponade include cancers that have spread to the pericardium, often from the lung and the breast. Another cause is uremic pericarditis, where blood levels of urea, a nitrogen waste product, get really high, usually due to a kidney problem. The high levels of urea in the blood irritate the serous pericardium. More rarely, cardiac tamponade can happen due to hypothyroidism or because of chronic inflammation from a connective tissue disease. In these situations, when fluid accumulates gradually, the pericardium can hold as much as 1.5 L of fluid before tamponade sets in.

So, in cases of cardiac tamponade, fluid puts pressure on the heart itself, preventing it from fully stretching out or relaxing between contractions. This means that the cardiac chambers can’t fill with blood properly, causing a decrease in cardiac output or a lower amount of blood being squeezed out with each heartbeat, which leads to hypotension. Less blood leaving the heart also means less blood reaching the organs and tissues, and the heart tries to compensate for its low output by beating faster. When a person suffering from cardiac tamponade breathes in, the systolic blood pressure sometimes drops. Normally, inspiration creates a tiny bit of negative pressure which pulls blood into the heart, momentarily increasing systemic venous return. When that happens, the right heart volumes increases, and the right ventricle expands a bit into the pericardial space, so it doesn’t affect the left heart volume at all. During inspiration in someone with cardiac tamponade, the right ventricle can’t move into the pericardial space, so the extra volume pushes the interventricular septum leftwards. This leads to a reduction in left ventricular diastolic volume, a lower stroke volume, and a drop in systolic blood pressure during inspiration. A decrease in the systolic pressure of greater than 10 mmHg is called pulsus paradoxus, and it’s a classic sign of cardiac tamponade.