A 45-year-old man presents to the emergency department due to intense headaches and difficulty with bright lights. The patient developed new genital lesions about a week ago. Brain imaging shows no abnormalities. Lumbar puncture is performed, and the CSF profile shows pleocytosis with a predominance of lymphocytes and a normal CSF glucose concentration. Which is the most likely cause of this patient’s condition? 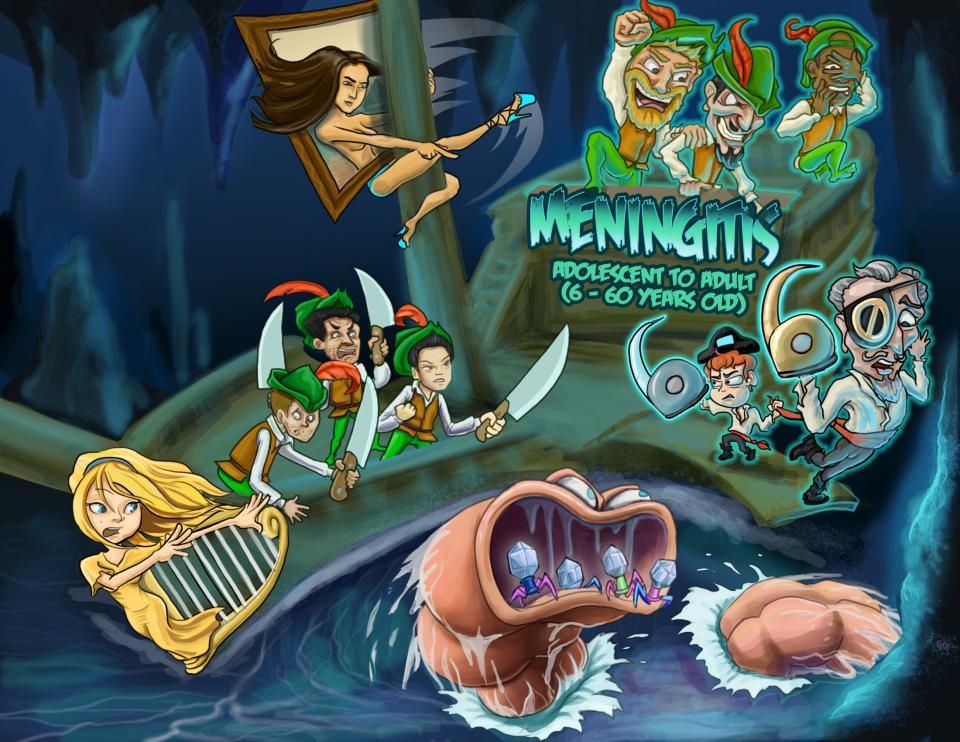 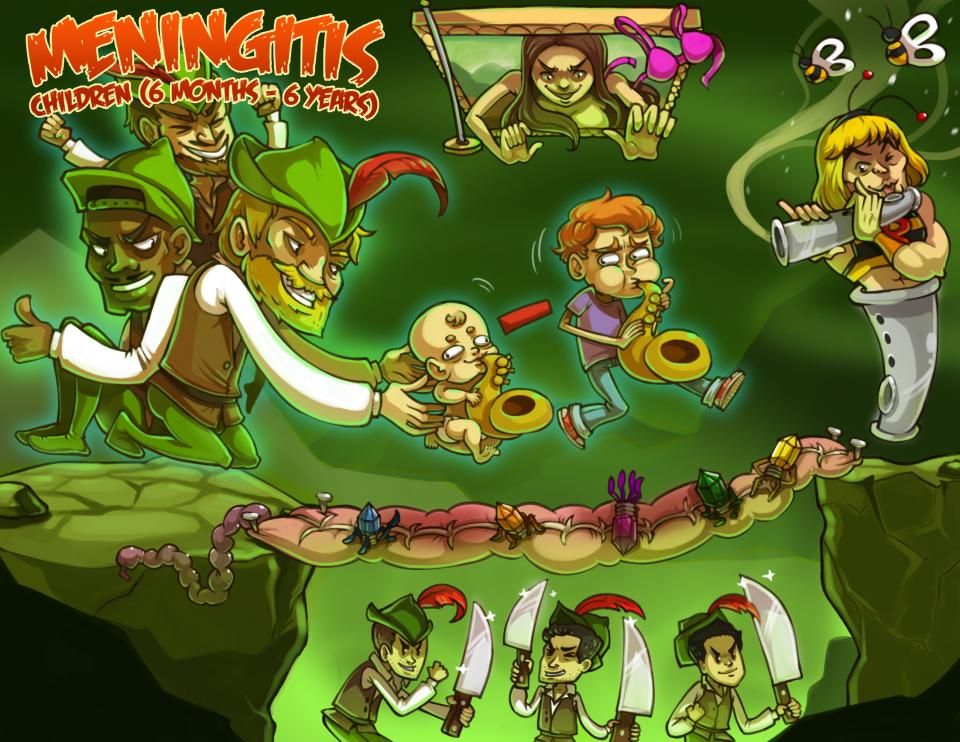 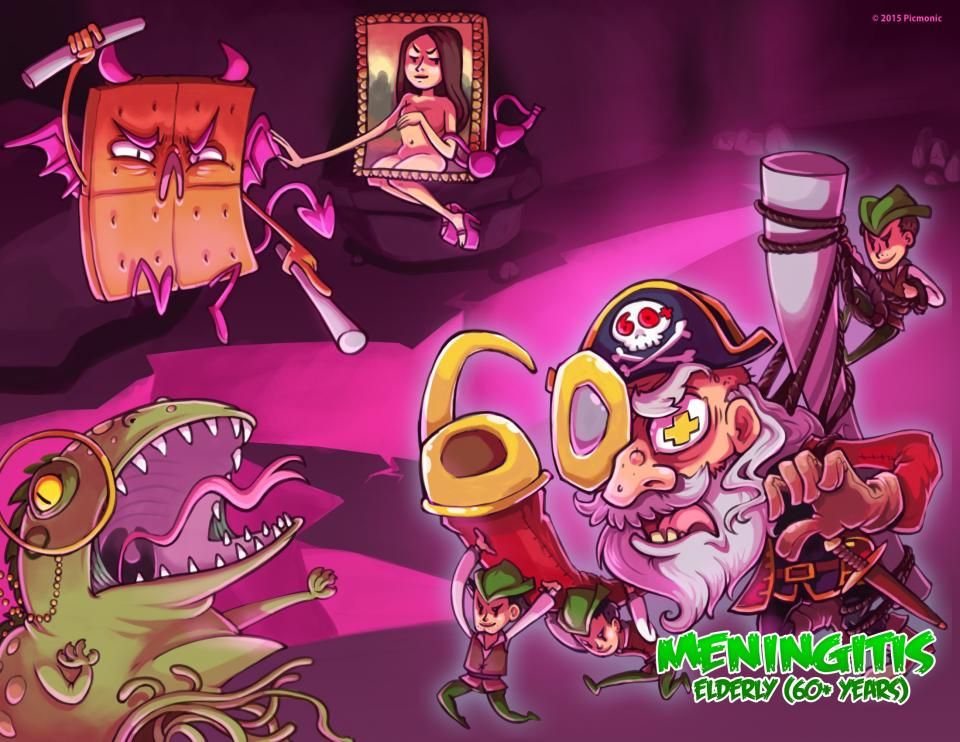 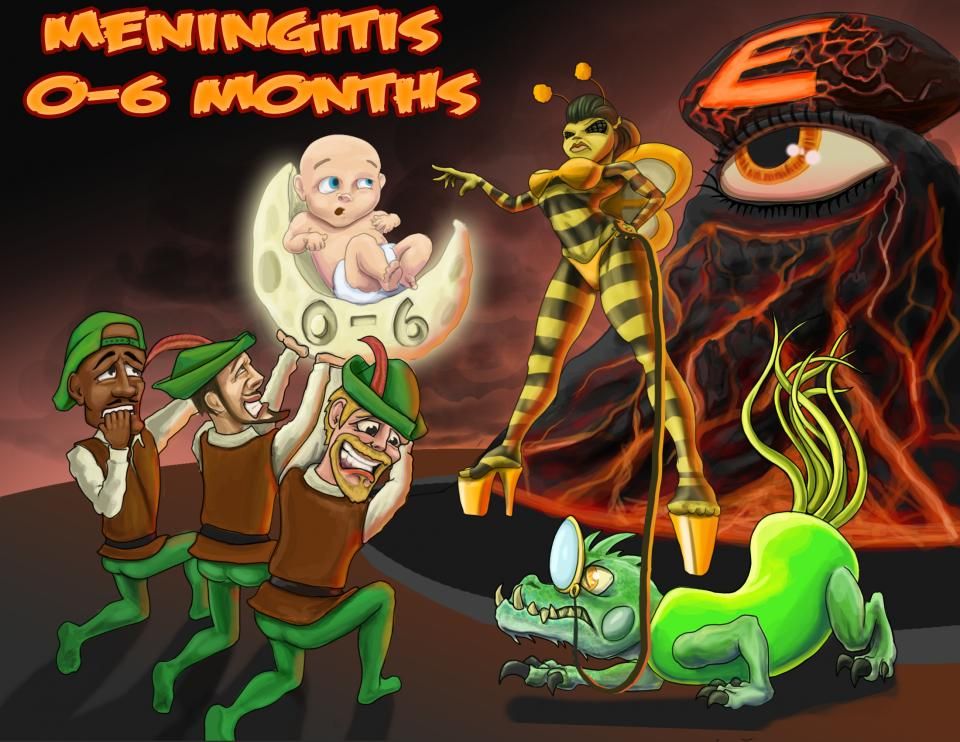 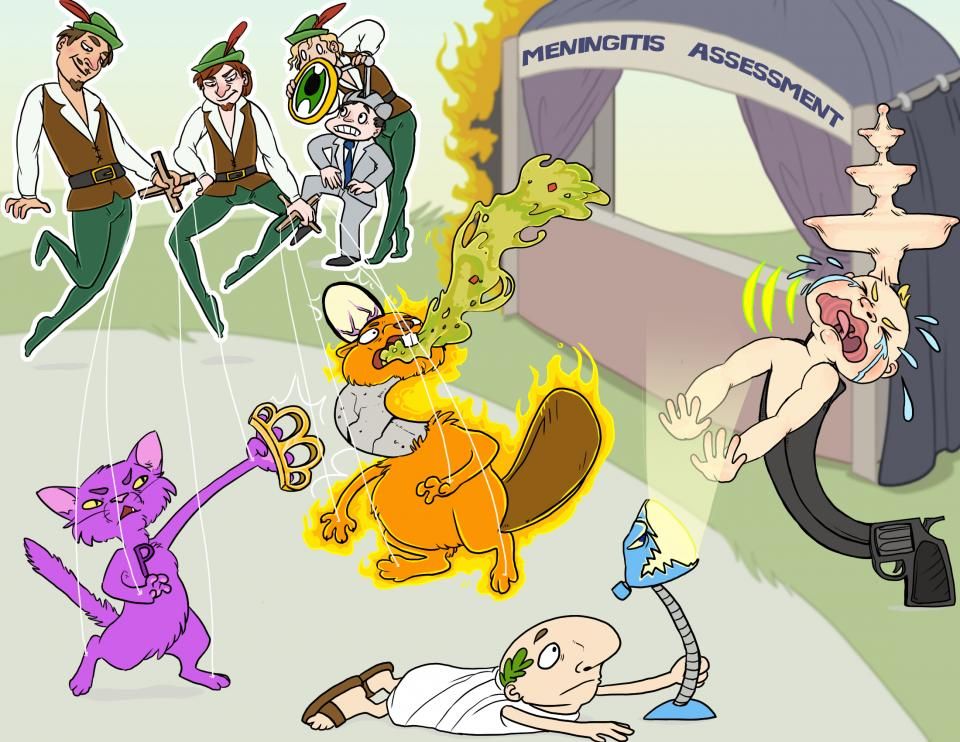 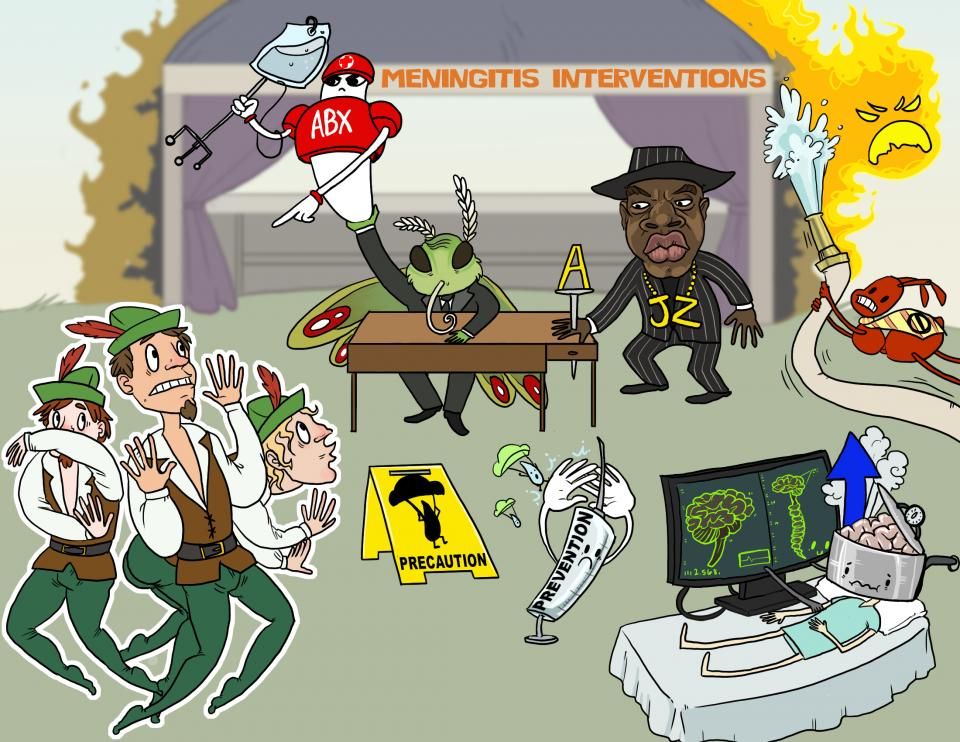 Okay, so let’s take a closer look at the various forms of CNS infections, starting with meningitis. Meningitis can be caused by any pathogen that infects the meninges. When it’s caused by viruses, mycobacteria, fungi, or parasites, it’s called aseptic meningitis, because routine bacterial cultures of the cerebrospinal fluid are negative. The most common cause of aseptic meningitis is a group of viruses called enteroviruses, like echovirus and coxsackie virus. Despite viral meningitis being much more common, acute bacterial meningitis is more life-threatening. The bacteria that is most likely to be responsible will depend on the individual’s age. For example, in infants less than 3 months, the most common causes in descending order are: group B Streptococci, Escherichia coli, and Listeria monocytogenes. In adolescents 13 to 17 years old, the most common causes are Neisseria meningitidis, followed by Streptococcus pneumoniae, and Haemophilus influenzae. In non-adolescent children 3 months to 12 years and in adults, Streptococcus pneumoniae is the most common cause, followed by Neisseria meningitidis and Haemophilus influenzae. It’s also important to consider Listeria monocytogenes in adults over the age of 50 or those who are immunocompromised. Also, Staphylococcus aureus is more common in individuals with a history of neurosurgical procedures or trauma to the head. Other rare but extremely important bacterial causes include Mycobacterium tuberculosis, lyme meningitis, rocky mountain spotted fever, and neurosyphilis. These are separated from the other causes because they’re usually associated with a specific risk factor. For example, tuberculous meningitis’s biggest factor is traveling to an endemic area or working with a high risk population. Lyme meningitis is caused by the spirochete Borrelia burgdorferi, and individuals can have a history of travel to an endemic region like the Northeast of the United States. Finally, Rocky Mountain Spotted Fever is caused by Rickettsia rickettsii and is carried by the Dermacentor dog tick. It is endemic to Central and South America as well as the Southeast United States. Neurosyphilis is rare, but it can arise in individuals with a history of untreated syphilis, especially in immunocompromised individuals.

Alright, now let’s move on to viruses which can cause aseptic meningitis, meningoencephalitis, or pure encephalitis. Pure encephalitis without meningitis is usually caused by viruses, most commonly enteroviruses. Herpes simplex virus, or HSV, is another very high yield cause of viral encephalitis. It can result from a primary infection but more commonly happens during reactivation.

This is when an HSV infection is being suppressed by the immune system and only the latent virus that’s settled in the sensory ganglia survives in the body. When the immune system is compromised, like when the individual is taking corticosteroids, the latent HSV can escape into the bloodstream and reach the brain, where it will typically affect the temporal lobes. Okay, now other viruses that can cause CNS infections include arboviruses like West Nile virus, which use a mosquito vector. Although mumps is quite rare due to vaccination, in unvaccinated individuals, it can cause viral meningitis as well as encephalitis. Measles can also cause encephalitis during the acute phase of the illness. However, even after the acute infection has resolved, a form of encephalitis called subacute sclerosing panencephalitis or SSPE can appear up to 10 years later and is typically fatal! Varicella zoster virus, or VZV can also cause a life-threatening form of encephalitis, particularly in immunocompromised individuals.

Alright, now in some situations, bacteria, fungi, and parasites can wall off from the rest of the brain parenchyma, forming an abscess. Brain abscesses can also develop from other infections in nearby structures, like otitis media and mastoiditis that usually cause abscesses on the temporal lobe and the cerebellum. There are also sinusitis and dental infections that usually cause abscesses on the frontal lobe. Bacterial brain abscesses are usually polymicrobial. Gram positive bacteria include Streptococcus viridans and Staphylococcus aureus while gram negative bacteria include Klebsiella, E.coli, and anaerobes like Bacteroides species.

Pathogens can also come from a hematogenous source, like dissemination from a lung abscess or endocarditis. Now, bacteremia typically leads to multiple abscesses, while single lesions are usually caused by infections that spread from a nearby organ. Other causes include Nocardiosis caused by Nocardia, which is found in soil and usually develops in immunocompromised individuals. Individuals with Nocardiosis present with tuberculosis-like symptoms including fever, weight loss, night sweats, and pulmonary infiltrates. The presence of skin lesions and brain abscesses distinguishes it from tuberculosis.

Now, when it comes to fungi, Mucor and Rhizopus species are important causes of brain abscesses. They cause a serious infection of the sinuses in individuals with diabetes or neutropenia called mucormycosis. From the sinuses, fungi can spread to the surrounding blood vessels and bones and enter the brain, causing a brain abscess of the frontal lobe. As for parasites, the tapeworm Taenia solium can cause neurocysticercosis, especially in those who have been exposed to contaminated pork. Most individuals with neurocysticercosis are either diagnosed incidentally or they present with epileptic seizures. Uniquely, in HIV-infected individuals with a CD4-positive T-cell count of less than 100, Toxoplasma gondii can cause multiple brain abscesses.

Alright, now all forms of meningitis present with a triad of fever, neck rigidity or resistance to flexion of the head, and headache. Other common symptoms include photophobia, nausea, and vomiting. Helpful signs include the Kernig and Brudzinski signs. To illicit the Kernig sign, place the individual in a supine position, flex the hip to 90 degrees, and attempt to extend the knee. If the individual has pain with full extension of the knee, that’s a positive Kernig sign. To elicit the Brudzinski sign, you have to passively flex the neck, and if there’s involuntary flexion of the hips due to pain, then that’s a positive Brudzinski sign. Now, these signs aren’t particularly sensitive, so negative Kernig and Brudzinski signs don’t exclude meningitis. Sometimes, fundoscopy of the eye can reveal papilledema, which indicates an increased intracranial pressure. There can also be focal neurological deficits like cranial nerve, motor, or sensory deficits. Okay, now the various forms of meningitis have a difference in the time course. Acute bacterial meningitis and HSV meningoencephalitis usually present within hours to a few days. Viral meningitis, Cryptococcal meningitis, Lyme disease, and Rocky Mountain Spotted Fever usually present over the course of days to weeks, while tuberculosis, coccidioides, and syphilis tend to present over the course of months. Additionally, some clinical clues on physical exam can point towards a specific cause. For example, petechiae are characteristic of Neisseria meningitidis. A red maculopapular rash on the wrists and ankles that spreads towards the body may indicate rocky mountain spotted fever. A bull’s eye-appearing rash called erythema chronicum migrans, bilateral facial nerve palsy, or cardiac arrhythmias like atrioventricular node block point towards Lyme meningitis. Flaccid paralysis of the extremities is characteristic of West Nile Virus, which occurs because the virus can also cause a concomitant myelitis, which is inflammation of the spinal cord. Parotitis may suggest mumps, and a group of vesicles in a dermatomal distribution suggests VZV.

Features of disseminated tuberculosis like pulmonary infiltrates, lymphadenopathy, and a positive tuberculin skin test should prompt consideration of tuberculous meningitis, especially in infants. Now, features of meningitis along with erythema nodosum or multiform, and arthralgias, suggest coccidioides immitis as the cause. As for the parasites, trypanosoma brucei causes a disease called African trypanosomiasis which presents with lymphadenopathy, fever, and neurological symptoms such as confusion. It can also cause sleep disturbances, and that’s why it’s also known as African sleeping sickness.

What distinguishes pure encephalitis from meningitis is an abnormal brain function - like a change in behavior and personality - and the absence of meningeal irritation symptoms like neck rigidity and Kernig and Brudzinski signs. Seizures can occur in both meningitis and encephalitis, and both can eventually lead to an altered mental status and even coma or death. Okay, now HSV encephalitis also has specific symptoms since HSV involves primarily the temporal lobe. So, in the exams, to diagnose HSV encephalitis, look for symptoms like aphasia, olfactory hallucinations, and personality changes.