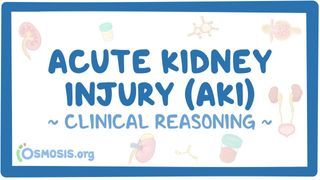 In prerenal AKI, the renin-angiotensin-aldosterone system is activated, leading to water and sodium retention.