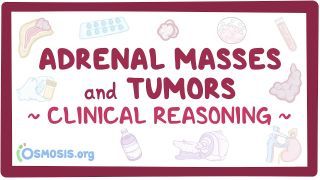 Transcript for Adrenal masses and tumors

Usually, they are asymptomatic, and they are discovered incidentally on an abdominal CT or MRI scan performed for another reason - which is why they’re sometimes also called incidentalomas.

As far as benign versus malignant goes, the first clues are based on the CT or MRI imaging: the size of the mass, its shape and borders, and CT attenuation, which is expressed in Hounsfield units, noted HU.

Adenomas are usually smaller than 4 centimeters, have a regular shape and borders, and have a CT attenuation lower than 10 Hounsfield units, which means they have about the same density as fat.

Additionally, on a contrast CT scan, adenomas typically washout the contrast pretty quickly - usually more than 50% is washed out 10 minutes after the contrast injection.

Carcinomas, on the other hand, are usually larger than 4 centimeters, irregular, have a CT attenuation higher than 20 hounsfield units, and can present with calcifications, local invasion and necrosis.

They also have more blood vessels nourishing the tumor, so contrast stays around longer, with less than 50% being washed out 10 minutes after the contrast medium is injected.

Finally, another difference can be spotted on an MRI.

Here, adenomas have isointensity with the liver, meaning, they’re about the same shade of grey, on both T1 and T2 weighted MRI sequences, whereas carcinomas are hypointense compared with the liver on T1 sequences, meaning they’re dark grey or black, but intermediate and high intensity on T2 sequences, so a light-grey, white shade.

Sometimes malignant growths on the adrenals can be metastases from cancer somewhere else in the body - like kidney, lung, colon cancer, melanoma or lymphoma.

Adrenal metastases can be suspected if the individual tumor already has another type of cancer - and to confirm that they’re not primary adrenal carcinoma, a fine needle aspiration of the mass has to be performed.

Now, if imaging suggests an adenoma, management depends on whether or not the mass is functional.

The majority of adrenal adenomas are non-functional; however, depending on the adrenal cells they derive from, some of them can secrete hormones.

Very rarely, the adenoma can secrete high quantities of aldosterone, which can lead to hypertension - so individuals with hypertension should also be screened for aldosterone hypersecretion.

Alright, so with cortisol hypersecretion, the individual may present with symptoms of Cushing syndrome, like recent onset hypertension, obesity, diabetes mellitus, osteoporosis or vertebral fractures.

Remember that pituitary ACTH normally stimulates cortisol production, and there is a negative feedback mechanism in place where high levels of cortisol inhibit ACTH secretion.

Based on this principle, evaluation begins with a low-dose overnight dexamethasone suppression test, which involves giving the individual 1 milligram of dexamethasone at 11 PM, and measuring serum cortisol the next morning.

Dexamethasone has a similar structure to cortisol, so in normal subjects, it will inhibit ACTH and cortisol secretion.

A serum cortisol level higher than 1.8 micrograms per deciliter between 8 and 9AM the following morning points towards cortisol hypersecretion.

Additional studies that can be done include 24 hour urinary cortisol, which will be high, and serum ACTH, that will be low.

When there’s catecholamine hypersecretion, on the other hand, the adrenal mass is called a pheochromocytoma, and the most common symptoms are hypertension that’s particularly hard to control with antihypertensive medication, along with headaches and increased sweating.

Screening is done by checking the levels of metanephrines, which are compounds that come from the degradation of catecholamines, in the blood and in the urine - so either a free plasma metanephrines or a 24-hours urinary metanephrines test.

If metanephrine levels are high, the diagnosis is pheochromocytoma.

Ok, now if the adenoma doesn’t secrete any of these hormones, it’s considered non-functional, and at that point it’s followed up with a CT or MRI scan in 6 to 12 months.

If it grows by more than 1 centimeter during this time, the affected adrenal gland is usually removed through laparoscopic adrenalectomy.

On the other hand, if the adenoma is functional, laparoscopic adrenalectomy is recommended from the get-go.

Something to bear in mind is that surgery to remove a pheochromocytoma can precipitate a severe hypertensive crises, so special preoperative measures are required.

Ok, now let’s switch gears and see what management is like if imaging suggests an adrenal carcinoma.

Primary adrenal carcinomas can be sporadic, or they can present as part of hereditary cancer syndromes, like Li-Fraumeni, Beckwith-Wiedemann or MEN1 syndromes.

Beckwith-Wiedemann, on the other hand, associates Wilms’ tumor, neuroblastoma and hepatocarcinoma.