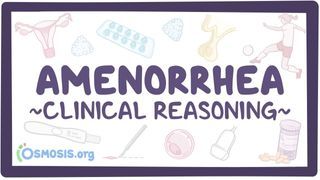 Amenorrhea means no menstruation, and that’s normal in females before puberty, during pregnancy and lactation, and after menopause.

Now, for menstruation to happen, a female must normal anatomy and a functioning hypothalamo-pituitary-ovarian axis.

In other words, the hypothalamus must secrete gonadotropin releasing hormone, or GnRH, to stimulate pituitary production of FSH and LH.

And, finally, the ovarian follicles must secrete estrogen and progesterone in response to FSH and LH stimulation.

And eventually, usually 2 to 3 years after the breasts have started developing, the first menstruation, or the menarche, occurs.

Menstruation marks the beginning of the menstrual cycle, and that cycle repeats every 28 days on average from puberty until menopause. Ovulation happens on day 14 of this average 28 day cycle.

If the oocyte is fertilized by a sperm, then the remains of the follicle keep secreting estrogen and progesterone to help with pregnancy until the placenta develops, and no menstrual bleeding occurs.

In the absence of pregnancy, estrogen and progesterone levels gradually decrease, and when they get really low, on day 28, this leads to menstruation, and the beginning of a new cycle.

So physiology aside, primary amenorrhea is when a female has not begun breast development by age 13 or hasn’t had menarche by age 15.

Secondary amenorrhea is when a female started have menstrual periods, but then stopped having them.

A pregnancy test is the first step for both primary and secondary amenorrhea, because some females can be pregnant even before they’ve had their first period.

If the individual is not pregnant, then the next step for primary amenorrhea is staging a female’s development using the Tanner scale.

There are five stages. In stage 1, the pre-pubertal stage, no pubic hair is present and females have a flat-chest.

In stage 4, pubic hair begins to cover the pubic area and breast enlargement continues to form a “mound-on-mound” contour of the breast.

And finally, in stage 5, pubic hair extends to the inner thigh and the breast takes on an adult contour.

Next, a pelvic ultrasound should be performed to confirm the presence or absence of the uterus, and serum levels of FSH should be drawn.

If there is a uterus, and FSH levels come back high, that suggests gonadal dysgenesis - which is when the gonads didn’t develop properly in utero, and they’re replaced by streak gonads - or functionless, fibrous tissue, which can’t respond to FSH stimulation - hence the high FSH levels.

In the individuals with the mosaic genetic pattern, some of the cells in their body have a single X chromosome, while others have either two X’s, or an X and a Y.

Individuals with Turner syndrome, have a short stature, a wide or webbed neck, a broad chest with widely spaced nipples, low-set ears, as well as arms that turn outward at the elbows.

Finally, in individuals with a mosaic of 45, X and 46, XY cells, the presence of a Y chromosome carries a high risk of gonadoblastoma, so their streak gonads should be surgically removed.

Individuals with Turner’s syndrome are given estrogen therapy in low doses that are gradually increased over 2 to 4 years, to achieve normal pubertal growth and development.

Two years after estrogen is started, individuals should receive progesterone for 10 days a month, to induce menstrual bleeding.

Now, if the karyotype comes back 46, XY, then they’re a genetically male individual, even though they have female internal and external genitalia and streak gonads.

This can happen when a fetus has a Y chromosome, which contains the sex-determining region of the Y chromosome - or SRY, but doesn’t have functioning gonads that can make testosterone or mullerian inhibiting factor. Without the influence of these hormones, the fetus develops female internal and external organs and tissues.

Like with Turner’s syndrome, the streak gonads are at high risk of developing cancer, so they should be surgically removed.

Finally, a rare cause of primary amenorrhea with high FSH levels is 17 alpha hydroxylase deficiency - an adrenal enzyme.

This enzyme normally turns progesterone into 17-hydroxy-pregnenolone and 17-hydroxyprogesterone, which are then turned into cortisol and androgens.

So with a 17-alpha-hydroxylase deficiency, there’s low cortisol and androgens which causes a lack of secondary sex characteristics.

Elevated levels of these weaker versions of aldosterone result in hypernatremia, hypokalemia, and hypertension.

Glucocorticoid replacement normalizes blood pressure, but that can sometimes take years - in the meantime, mineralocorticoid receptor blockade with spironolactone can help counter the effects of excess aldosterone precursors.

Additionally, development of secondary sex characteristics can be induced with low-dose estrogen given during puberty, and a progestin can be added 2 years later to induce cyclic menstrual bleeding.

Ok, now let’s switch gears and see what the differential is for an individual that has a uterus, but their FSH levels come back low.

First step is to repeat the FSH levels and also check LH levels. If both are low, then the most likely cause is a hypothalamic or pituitary disorder, like congenital GnRH deficiency, or constitutional delay of puberty.

With congenital GnRH deficiency, the hypothalamus doesn’t produce GnRH at all.

One subtype is Kallmann syndrome, which is when the GnRH secreting neurons fail to form during fetal development.

These neurons are closely linked to olfactory neurons, so individuals with Kallmann syndrome have absent, delayed or incomplete puberty, as well as anosmia - or absent sense of smell.

Normal adrenarche, however, still occurs, so these individuals do develop pubic hair.

Constitutional delay of puberty, on the other hand, is when the individual just goes through puberty a little later, and it can be suspected if other females in the family also had a late menarche.

Additionally, in this case, there is also no pubic hair development, because all features of puberty are delayed.

The last clinical scenario is when the ultrasound reveals an anatomic abnormality, like evidence of an outflow tract obstruction, or an absent uterus.

Outflow tract obstruction can happen because of a transverse septum inside the vagina, or an imperforate hymen.

Individuals can have recurring menstrual cramps and pain, without any outwards signs of bleeding.

Both of these can be corrected surgically - an imperforate hymen can be incised close to the hymenal ring, and then built-up blood can be evacuated.

A transverse vaginal septum can be surgically excised.

The three main causes of this are mullerian agenesis, complete androgen insensitivity syndrome, and 5-alpha reductase deficiency. To tell these three apart, we’ll need a karyotype and serum testosterone levels.

If the karyotype comes back 46, XX, then the individual is genetically female, and the diagnosis is mullerian agenesis.

Individuals have a short vagina, and either an absent, or a rudimentary and obstructed uterus.