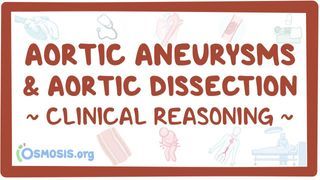 Transcript for Aortic aneurysm and dissection

Most individuals with Abdominal aortic aneurysm, or AAA, have no symptoms and are only detected as an incidental finding on imaging studies performed to evaluate an unrelated condition.

One-time screening with ultrasound can be done in individuals with risk factors like hypertension, increasing age, male gender, smoking, atherosclerosis, genetic syndromes - such as Turner syndrome or connective tissue diseases like Marfan’s syndrome or Ehlers-Danlos syndrome, familiarity for aneurysmal diseases, and having aneurysms in other arteries.

Aortic dissection is defined as a separation of the layers of the aortic wall due to an intimal tear, creates a second blood flow channel.

Blood may flow in between the layers of the blood vessel wall as the tear extends, which can lead to aortic rupture or decreased blood flow to the organs.

Dissection in most cases is associated with a sudden onset of severe pain, often described as tearing.

Aortic dissection can quickly evolve to full-thickness tearing due to the weakening of the aortic wall to the extent that it can no longer support the forces imposed upon it, leading to a complete rupture.

Most cases of aortic rupture present with the classical triad of severe acute pain, a pulsatile abdominal mass, and hypotension.

This may rapidly cause a massive hemorrhage, possibly evolving into shock and death.

Aortic aneurysms are classified by their location along the aorta.

Abdominal aortic aneurysms involve the segment of the aorta within the abdominal cavity.

Thoracic aortic aneurysms are found within the chest; and these are further classified as ascending or descending aneurysms.

AAAs are the most common form of aneurysm, usually involving the infrarenal segment of the aorta, inferior to the renal arteries and superior to the iliac bifurcation.

A AAA is defined as dilation with a transverse diameter exceeding 3 centimeters.

Symptoms of a AAA, include abdominal pain that can radiate.

The pain is typically unrelated to movement or body position.

Aneurysms cause turbulent blood flow and that can lead to vessel wall damage, areas of stagnant blood flow, and the formation of thrombi.

Finally, large aneurysms can cause local compression of nearby structures, like the gastrointestinal tract or the spine.

A definitive diagnosis of AAA requires seeing a focal aortic dilation on imaging.

Based on prior imaging, a rapidly expanding aneurysm is defined as one that grows more than 0.5 centimeters per year.

For symptomatic individuals, a diagnosis of AAA is guided by their hemodynamic status.

Hemodynamically stable individuals with symptoms of a AAA should get an urgent abdominal CT scan with contrast.

CT scan findings consistent with a ruptured AAA include a retroperitoneal hematoma, indistinct aortic walls, retroperitoneal fat stranding, loss of the fat plane between the aorta and surrounding tissue, and extravasation of IV contrast outside the aorta into the retroperitoneum, into a vein, or even into the bowel.

Now, in hemodynamically unstable individuals with symptoms of a AAA, they should be taken right away for surgical management.

On the other hand, if it’s not clear that they have an aneurysm, then a bedside ultrasound should be obtained.

Repair is recommended if the aneurysm is or becomes bigger than 5.5 centimeters or is rapidly expanding, which is defined as an increase in maximal aortic diameter of 5 millimeters or more over a six-month period of time or more than 1 centimeter over one year.

A ruptured AAA can be fatal and needs emergency repair.

For individuals with ruptured AAA, the systolic blood pressure should be maintained between 80 and 100 mm Hg prior to repair, which is known as permissive hypotension, to minimize further tearing of the aorta and reduce blood loss.

The dilated portion of the aorta is opened for insertion of a synthetic graft.

Once the graft is sewn into the proximal and distal portions of the aneurysm, the aneurysmal sac is closed around the graft to avoid adhesions or fistulization, especially with the duodenum.