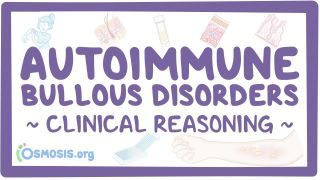 Autoimmune bullous disorders are a group of disorders in which the immune system mistakenly attacks the skin and mucosal membranes.

The lesions start as blisters, and then evolve into erosions, ulcers, and finally crusts. Often times this pattern occurs recurrently.

Now for diagnosis, a history and physical can be followed up with a skin biopsy, serologic studies, and microbiologic tests.

A skin biopsy with light microscopy can reveal the skin layer involved in blister formation and the type of inflammatory cell infiltrate.

If it’s a small vesicle, then the entire lesion should be removed. For larger lesions, a specimen should be obtained from the edge of a blister, and it should contain both portions of the blister and intact skin.

Direct immunofluorescence studies are typically done when an autoimmune blistering disorder is suspected, because they can detect the antibody or complement deposition pattern and skin level of involvement.

Finally, it’s important to take a biopsy from normal-appearing skin adjacent to the blister, also called a perilesional biopsy, to get reliable results.

Also serologic testing may be useful for the evaluation of autoimmune blistering disorders, using indirect immunofluorescence to detect antibodies within the circulation.

If the target of circulating antibodies associated with specific autoimmune blistering diseases is known, antigen-specific testing can be used, such as ELISA, immunoblotting, and immunohistochemistry.

Let’s start off with pemphigus. Pemphigus includes a group of rare, but potentially life-threatening blistering disorders caused by autoantibodies that target adhesion molecules in the epidermis.

This results in the loss of intercellular connections - which is called acantholysis, and that leads to the formation of intraepithelial blisters in mucous membranes and skin.

There are several types of pemphigus that vary in severity, among which the four major ones are pemphigus vulgaris, pemphigus foliaceus, IgA pemphigus, and paraneoplastic pemphigus.

The most common form is called pemphigus vulgaris, and that’s where bullae form deep in the skin and mucosae that rupture easily and evolve to very painful erosions.

The oral cavity is the most common site of mucosal lesions and it can cause oral pain with chewing and swallowing, which may lead to malnutrition and weight loss.

Mucous membranes at other sites may also often be affected, such as the conjunctiva, nose, esophagus, vulva, vagina, cervix, and anus.

Individuals with pemphigus vegetans have vegetating plaques with excessive granulation tissue and crusting. The intertriginous areas, scalp, and face are the most common sites involved.

On the other hand, pemphigus herpetiformis causes urticarial plaques and cutaneous vesicles arranged in a herpetiform or annular pattern, and they’re usually pruritic.

On physical examination, a positive Nikolsky sign is indicative of pemphigus vulgaris, which is when slight rubbing of normal skin or at the edge of a blister leads to further blistering. This occurs because the friction on the skin causes detachment of skin layers, since cell-to-cell adhesions are very fragile.

Upon direct immunofluorescence studies, individuals with pemphigus vulgaris have IgG autoantibodies against the adhesion molecule desmoglein 3.

Next there’s pemphigus foliaceus, which is the mildest form of pemphigus, and typically there are small, scattered superficial blisters that rapidly evolve into scaly, crusted erosions. There’s usually mild pain or a burning sensation. The mucous membranes are typically spared.

One subtype is called endemic pemphigus foliaceus and it occurs in specific geographic areas, like Central and South America. As a result, it’s thought to have an environmental trigger.

On physical examination, a positive Nikolsky sign is observed for pemphigus foliaceus as well, but upon direct immunofluorescence, these individuals present IgG autoantibodies against desmoglein 1.

Then there’s IgA pemphigus, which is the only pemphigus subtype that’s mediated by IgA autoantibodies instead of IgGs, and they target desmocollin 1.

It is characterized by the subacute development of vesicles that evolve into pustules, and are usually accompanied by erythematous plaques.

The trunk and proximal extremities are the most common sites for involvement, while the scalp, postauricular skin, and intertriginous areas are less common, and mucous membranes are usually spared.

And finally, there’s the most severe form of pemphigus, which is paraneoplastic pemphigus.

Oral involvement is very common, with painful, erosive stomatitis that characteristically includes involvement of the tongue, and that often leads to malnutrition.

Other potential sites of mucosal involvement include the nasopharynx and anogenital area, and occasionally, lesions develop on the mucosal surfaces of the esophagus, stomach, duodenum, or colon.

There can also be conjunctival involvement, and this may lead to cicatrizing conjunctivitis, damage to the cornea, and eventually visual impairment.

Cutaneous lesions typically develop after the onset of mucosal lesions.

And finally, some individuals may also develop a life-threatening restrictive bronchiolitis, usually late in the course of the disease.

Broadly speaking, if not treated, all forms of pemphigus can be fatal, usually from opportunistic infections of the skin and mucosal lesions.

The aim of treatment is to decrease blister formation, promote healing of blisters and erosions, and to determine the minimal dose of medication necessary to control the disease process.

Systemic glucocorticoids are very effective for the treatment of pemphigus. Initial treatment ranges between 1 to 2 milligrams per kilogram of oral prednisone per day.

Now, high doses of a systemic glucocorticoid over time can cause serious adverse effects, so alternatively, individuals may be treated by combining a reduced dose of oral prednisone of 0.5 to 1 milligram per kilogram per day with rituximab at a dosing of two 1000 milligrams of intravenous infusions separated by two weeks, which is associated with reduced rates of severe adverse events compared with prednisone monotherapy.

Some individuals may benefit from nonsteroidal immunomodulatory agents as adjuvant therapies.

Azathioprine and mycophenolate mofetil are the most common adjuvant agents used. Other options include cyclophosphamide, cyclosporine, intravenous immune globulin, plasma exchange, or infliximab.

Although the majority of individuals with pemphigus achieve improvement with this initial treatment, some continue to have relapses.

The first step is to optimize the dose of the systemic glucocorticoid up to a maximum of an equivalent of 1.5 to 2 milligrams per kilogram per day of prednisone and adding an adjuvant agent, or to change the adjuvant to a different agent.

Regarding paraneoplastic pemphigus, management requires treating the underlying neoplasm, and systemic glucocorticoids are often the initial treatment. Regimens usually start with 1 milligram per kilogram per day of prednisone, followed by a slow taper as tolerated to a maintenance dose of 10 to 15 milligrams per day over the course of six months. Also here, this may be given in combination with rituximab, giving 375 milligrams per square meter weekly for four weeks and repeat this course every three to six months.

For individuals who improve only partially or who develop disease flares during prednisone tapering, a nonsteroidal immunomodulatory agent may be added as adjuvant therapy.

Moving on, pemphigoid is a subepidermal blistering disorder that is similar in general appearance to pemphigus, but, unlike pemphigus, pemphigoid does not cause acantholysis.

Direct immunofluorescence detects IgG autoantibodies and complement which is found between the epidermis and the basement membrane.

The most common type is called bullous pemphigoid.

The onset of blistering lesions in bullous pemphigoid is preceded by a prodromal phase lasting weeks to months of pruritic inflammatory plaques that resemble urticaria.

Once the bullous phase develops, individuals exhibit multiple tense bullae on an erythematous, urticarial, or noninflammatory base, as well as erosions and crusts at sites of ruptured bullae. Healing doesn’t leave a scar.

The trunk, extremity flexures, and axillary and inguinal folds are common sites for cutaneous involvement, and some individuals with bullous pemphigoid develop mucosal involvement, like erosions of the oral mucosa.

In contrast, individuals with mucous membrane pemphigoid have a lot of mucosal involvement, that includes the oral cavity as well as the ocular conjunctiva.

Scarring is a common consequence that distinguishes mucous membrane pemphigoid from bullous pemphigoid, which typically does not scar.