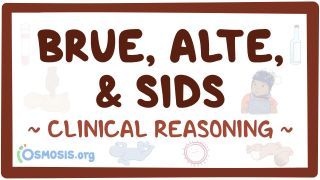 Transcript for BRUE, ALTE, and SIDS

In 1986, the term ALTE which stands for Apparent Life-threatening Event was used to represent an episode that can happen in any child, but mostly in infants, less than 1 year of age causing at least one of the following 5 symptoms: a sudden change in color, like cyanosis, pallor, or erythema; a change in muscle tone, like hypotonia; or apnea lasting over 20 seconds; choking; or gagging. Names are important and the term ALTE caused some problems.

It was vague, causing caregivers to worry, and most of the time it referred to events that were normal variations of an infant’s normal behavior.

So, in 2016, ALTE was replaced by BRUE - a Brief, Resolved, Unexplained Event.

Resolved means that the event is over and the infant has returned to their baseline.

And unexplained - is self-explanatory.

The event has to happen specifically in an infant under 1 year old and involve one or more of the following 4 symptoms: a sudden change in color, like cyanosis, pallor, but not erythema; muscle tone, either hypotonia or hypertonia; breathing, which includes any irregular or diminished breathing like apnea; or an altered level of responsiveness or consciousness.

The key distinction with ALTE is that BRUE has age and time limits, doesn’t accept erythema as a color change and doesn’t include choking or gagging.

Instead, it includes hypertonia in muscle tone changes, irregular or diminished breathing in breathing changes, and an extra category of symptoms: the change in the level of responsiveness or consciousness.

When an infant who has had a BRUE is brought for evaluation, the first thing to do is to assess the vital signs - to make sure that they’ve normalized.

After that a careful history is taken that reviews potential causes of sudden events that can spontaneously resolve.

One is GERD, which usually causes spitting up after feeding and Sandifer’s sign, or arching of the back.

Another is seizures, which can cause abnormal eye movements or limb jerking.

An infant may have a congenital cardiac defect or an arrhythmia, which usually also causes failure to thrive or a murmur.

Finally, child abuse that should be considered, like a shaken baby scenario.

If there are no clear clues in the history, infants are grouped into low-risk and high-risk groups.

Low-risk infants are older than 60 days, born after 32 weeks of age, have not had prior BRUEs, and didn’t need CPR.