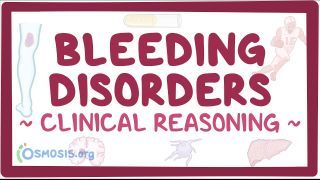 The first clue in distinguishing between primary and secondary hemostasis is the clinical presentation.

Primary hemostatic problems can be further subdivided into two groups.

The first is a decrease in platelet number, thrombocytopenia - which may be caused by decreased production, increased destruction, or sequestration.

The second is a decrease in platelet function, like in von Willebrand disease, Bernard-Soulier disease, Glanzmann thrombasthenia, uremic platelet dysfunction, and as a result of medications like aspirin, non-steroidal anti-inflammatory drugs or NSAIDs, and clopidogrel.

Patients with primary hemostatic problems often have a prolonged bleeding time, which involves mildly pricking the patient, and then timing how long it takes for them to stop bleeding - normally, this occurs within two to five minutes.

In contrast, patients with secondary hemostatic problems can develop large bruises called ecchymoses, deep tissue hematomas or hemarthrosis - which is bleeding inside the joint space, posterior epistaxis - which causes a severe nosebleed, persistent bleeding after surgical procedures, as well as intracerebral hemorrhage.

Secondary hemostatic problems are usually due to a decrease in the number of clotting factors, and causes include; hemophilia, liver cirrhosis, vitamin K deficiency, disseminated intravascular coagulation or DIC, and anticoagulant medications like heparin.

Alright, let’s quickly review the physiology of hemostasis. Let’s say you fall and scrape your knee - injuring the endothelium, which exposes the underlying collagen.

Initially, platelets clump together and form a plug at the site of injury, preventing bleeding.

Endothelial cells store and release Von Willebrand factor, which serves as the glue between the platelet receptor Gp1b and the collagen underneath the endothelial cells.

Next, platelets release ADP and thromboxane A2, which promotes the expression of the platelet receptor Gp2b3a.

Fibrinogen binds to these platelet receptors, forming a fibrin net around the platelet plug.

But fibrinogen is relatively weak, so the body starts the process of secondary hemostasis to convert fibrinogen into fibrin - which is much stronger.

So if a patient has primary hemostatic bleeding, the first step is to identify and stop medications that can interfere with primary hemostasis, like aspirin.

It’s usually caused by autosomal dominant mutations of von Willebrand factor, which makes it hard for platelets to adhere to collagen.

So without von Willebrand factor, there’s less functioning factor 8 around.

In von Willebrand disease, a complete blood count or CBC, might show anemia due to the loss of red blood cells, and a normal platelet count.

The PTT may be normal, or elevated in patients with decreased factor 8 activity.

Von Willebrand factor levels may be low in type 1 disease, or normal in type 2 disease.

Another test called the von Willebrand factor ristocetin cofactor assay can also be done. In this test, a patient’s blood is mixed with an antibiotic called ristocetin.

Alright, the best initial treatment for patients with von Willebrand disease is desmopressin, or DDAVP; which is an antidiuretic hormone analogue.

Desmopressin stimulates the release of both von Willebrand factor and factor 8 from endothelial cells.

It’s definitely useful in patients with type 1 disease, but it may or may not work in type 2 patients - where the issue is quality, not quantity, of von Willebrand factor.

So the next option is to give a concentrate rich in von Willebrand factor and factor 8, and in serious bleeding, platelet transfusions can be given.

Moving on, Bernard-Soulier is a rare autosomal recessive disorder caused by deficiency or absence of the platelet receptor Gp1b.

A CBC can show anemia from bleeding, and in contrast to von Willebrand disease; there may also be a thrombocytopenia.

That’s because the megakaryocytes in the bone marrow make really large platelets that aren’t properly counted by the platelet counting machine, resulting in a low platelet count.

However, unlike von Willebrand disease, addition of normal plasma to the test sample does not correct platelet aggregation, because there’s a defect in the platelet receptor, and not von Willebrand factor.

Most patients with Bernard-Soulier have mild symptoms and don’t require treatment, but in more serious bleeding, platelet transfusions can be done.

The term thrombasthenia literally means “weak platelets”. And it’s caused by deficiency in the platelet receptor Gp2b3a, which leads to diminished platelet aggregation.

A CBC may show anemia due to bleeding, and a normal platelet count.

Unlike von Willebrand disease and Bernard-Soulier however, platelets do aggregate in response to ristocetin, since there’s nothing wrong with von Willebrand factor or Gp1b.

Similar to Bernard-Soulier, most patients have mild symptoms and don’t require treatment, and platelets are transfused are in serious bleeding.

The pathophysiology isn’t fully understood, but it’s thought that there’s an accumulation of toxins which affects how platelets and endothelium interact.

Evidence of kidney disease like an elevated blood urea nitrogen and creatinine help confirm the diagnosis.

Okay, onto disorders of secondary hemostasis. So, say a patient comes in with a deep tissue bleed like a large hematoma in the thigh. As before, you first have to consider medications as a cause.

For example, if the cause is unfractionated heparin then the key is stopping the heparin and giving the antidote; protamine sulfate, which - brace yourself - is made from salmon spermatozoa. Yikes!