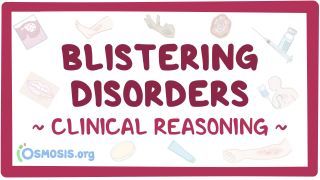 Blistering skin disorders are characterized by the presence of blisters, which are bubbles that pop up when serum collects in pockets under the top layer of the skin.

Blisters that form within the epidermis tend to be more fragile than subepidermal blisters.

There are various causes for blistering disorders, including autoimmune disorders, drug reactions, infections, genetic disorders, and traumatic injury. These conditions range from benign to life-threatening conditions.

Broadly speaking, blistering skin disorders may be divided into generalized or localized disorders.

Miliaria crystallina typically results in multiple tiny vesicles on the face and trunk, due to obstruction of eccrine sweat gland ducts in the setting of excessive warmth.

Usually, the rash of miliaria resolves on its own, the key is to avoid overheating the body by wearing lighter clothing, staying hydrated, and keeping a cool environment, for instance by using air conditioner. A soothing ointment like calamine lotion can also help.

Bullous impetigo is caused by Staphylococcus aureus, which produces exfoliative toxins that cleave adhesions between the epidermis and dermis, leading to the formation of bullae.

The cleavage plane is either subcorneal or within the upper stratum granulosum.

The most frequent areas involved are the face, trunk, perineum, and extremities.

Since Staphylococcus aureus are found on the skin and can be spread among family members, prevention is targeted towards preventing transfer from person to person.

Bullous impetigo can be treated with oral antibiotics like cephalexin, and if it doesn’t improve it could indicate that it’s due to a MRSA infection, which may require vancomycin or clindamycin.

Bullous impetigo in newborns, children, or adults who are immunocompromised can develop into a more severe and generalized form called Staphylococcal scalded skin syndrome, which typically causes systemic symptoms like fever and malaise.

The mainstay of treatment is supportive care with rehydration and antipyretics like ibuprofen or paracetamol, as well as IV antibiotics - initially giving penicillinase-resistant penicillin, such as nafcillin or oxacillin, while vancomycin should be considered in areas with a high prevalence of MRSA or for individuals who fail to respond to initial therapy.

Linear IgA bullous dermatosis is a subepidermal autoimmune disorder associated with the deposition of IgA at the basement membrane zone of skin and mucosal tissues.

The cutaneous bullae often have a distinctive grouped appearance that resembles a cluster of jewels, while mucosal lesions primarily present as erosions or ulcers. This disorder may be idiopathic or drug-induced.

Some drug classes that cause this include antibiotics like vancomycin, antihypertensives, and NSAIDs.

On the other hand, idiopathic cases may persist for a decade or longer, and thus systemic therapy with dapsone is generally required until the individual shows clinical remission with gradual tapering toward treatment cessation.

Epidermolysis bullosa is a rare blistering disorder that may affect both skin and mucous membranes.

Now, healthy individuals have protein anchors between the epidermis and the dermis to prevent the two layers from moving independently from one another and shearing.

In people with epidermolysis bullosa, the two skin layers lack the protein anchors that hold them together, resulting in extremely fragile skin. That’s why any kind of trauma, even minor mechanical friction like rubbing or pressure, will separate the layers of the skin and form blisters and painful sores.

There is no cure for epidermolysis bullosa. Management involves wound care, pain control, controlling infections, nutritional support, and prevention and treatment of complications.

Pemphigus is a rare group of blistering autoimmune diseases that affect the skin and mucous membranes.

In pemphigus, autoantibodies form against desmoglein, so the epidermal cells become separated from each other, a phenomenon called acantholysis. This causes blisters that slough off and turn into sores.

There are several types of pemphigus, which vary in severity.

The most common form is called pemphigus vulgaris, and it’s characterized by the formation of bullae in the skin and mucosae that quickly evolve to very painful erosions, making it hard for these individuals to eat.

A positive Nikolsky sign is indicative of the disease, in which there’s induction of blistering in normal skin or at the edge of a blister when applying pressure. This occurs because the friction on the skin causes detachment of skin layers, since cell-to-cell adhesions are very weak and fragile.

Then there’s IgA pemphigus, which is the only pemphigus subtype that’s mediated by IgA antibodies instead of IgGs.

IgA pemphigus is characterized by the subacute development of vesicles that evolve into pustules, and may be accompanied by erythematous plaques.

The trunk and proximal extremities are common sites for involvement, while mucous membranes are usually spared.

Next there’s pemphigus foliaceus, which is the mildest form of pemphigus, since typically the skin lesions that develop are superficial.

They present as small, scattered superficial blisters that rapidly evolve into scaly, crusted erosions, and are much less painful. Also, there’s no mucosal involvement.

And finally, the most severe form of pemphigus is paraneoplastic pemphigus, which is caused by an underlying cancer, especially hematological malignancies.

Paraneoplastic pemphigus resembles the vulgaris type, and it’s characterized by painful erythematous macules, papules, blisters, and erosions involving the skin and mucosa. There can also be conjunctival involvement and that can lead to blindness.

If not treated, pemphigus can be fatal, usually from an opportunistic infection of the lesions.

Broadly, the aim is to decrease blister formation, promote healing of blisters and erosions, and determine the minimal dose of medication necessary to control the disease process.

Usually oral steroids, especially prednisone, are given in high doses. Immunosuppressive agents like Azathioprine, Mycophenolate mofetil, Cyclophosphamide, IVIG, or Rituximab may be used as adjuvant therapy as well, for individuals that don’t respond to steroids.

With paraneoplastic pemphigus, management of the underlying cancer is often the only effective treatment.

Moving on, pemphigoid is a subepidermal blistering disorder that is similar in general appearance to pemphigus, but a key difference is that pemphigoid does not feature acantholysis.

The autoantibodies bind to hemidesmosomes, and cause complement deposition and inflammation, leading to keratinocyte death and formation of blisters.

Classic skin lesions are urticarial plaques and tense bullae on the trunk and extremities.

Intense pruritus is common, and lesions typically do not scar.

The treatment is the same as for pemphigus.

Pemphigoid gestationis is another type of pemphigoid that occurs during pregnancy or in the immediate postpartum period.

Urticarial plaques and vesicles typically begin around the umbilicus prior to spreading elsewhere with large bulla formation.

Treatment essentially is the same, but some immunosuppressants like Cyclophosphamide and Methotrexate aren’t used because they’re teratogenic. Ultimately, the most effective treatment is delivery of the baby.

Dermatitis herpetiformis is a cutaneous manifestation of gluten sensitivity.

The lesions are intensely pruritic, leading to erosions and excoriations.

The only treatment is a gluten-free diet, which often leads to resolution of these skin lesions over months to years.

In addition, dapsone is an effective initial treatment in most people, resulting in the resolution of active skin lesions within days of the start of therapy.

Topical corticosteroids may be given in conjunction with dapsone to help alleviate the itching.

After two to three months on a gluten-free diet, the dosage of dapsone is often tapered as tolerated.