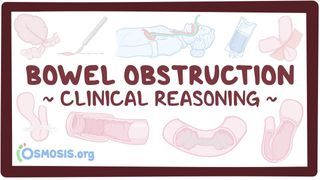 Bowel obstruction can be defined as partial or complete.

The causes of bowel obstruction can be either functional or mechanical causes.

Functional, or adynamic causes disrupt peristalsis, which are the waves that move through the smooth muscles of the bowel walls.

Among mechanical causes, one cause of small bowel obstruction in individuals who have previously undergone surgery, are postoperative adhesions.

Adhesions are fibrous bands of scar tissue that causes organs to attach to the surgical site or to other organs, causing the lumen of the bowel to get kinked or pinched tight in certain spots.

Another cause of small intestinal obstructions is hernias - which is when a portion of the bowel protrudes out of the abdominal cavity and can get trapped or tightly pinched at the point where it pokes out.

Large bowel obstructions, on the other hand, are most often due to a volvulus - which is when a loop of intestine twists upon itself, kinking off the lumen.

Other mechanical causes of both small and large bowel obstruction include inflammatory bowel disease which can cause strictures and adhesions, ingestion of a foreign body which can get lodged along the gastrointestinal tract, and intussusception - which is where a part of the intestine folds into the lumen of an adjacent section of bowel.

One unique situation is called a closed-loop obstruction, and it’s where the intestine is obstructed at two locations, creating a segment where nothing goes in, and nothing comes out.

Over time, the bowel walls become edematous, so they stop absorbing any more nutrients and water.

Individuals can develop nausea and vomiting which can cause electrolyte abnormalities and dehydration.

Finally, some individuals develop respiratory distress from upward pressure on the diaphragm from their distended abdomen.

Now, generally speaking, in small bowel obstruction, vomiting is more common and the pain tends to be periumbilical, cramping, and intermittent - with bouts that last for a few minutes at a time.

In large bowel obstruction, vomiting is less common and the pain is lower in the abdomen and the bouts of pain are less frequent but last a bit longer.

If bowel dilation becomes excessive, or if there’s bowel strangulation, the bowel wall can face extreme pressure causing the blood vessels within the walls to collapse.

When that happens perfusion to the intestine can be compromised, and it can lead to ischemia, and eventually necrosis and perforation.

When there’s progression from cramping to more focal and constant pain it can indicate localized peritoneal irritation due to a microperforation of the intestine.

Alternatively, a large intestinal perforation may cause a sudden relief of pain due to the nerves in the bowel wall no longer being stretched, but then it’s usually followed by progressive worsening of pain, as generalized peritonitis sets in.

Finally, hematochezia can be a sign of colorectal cancer, which can be a cause of bowel obstruction or bowel ischemia.

Next up, lab studies include a CBC with differential, as well as a basal metabolic panel including electrolytes, BUN, and creatinine.

Individuals with more severe symptoms like fever, tachycardia, hypotension, and altered mental status, should have an ABG and a serum lactate, because metabolic acidosis and an elevated lactate level suggest bowel ischemia.

Finally blood cultures should be sent if there are clinical signs of peritonitis or sepsis.

In bowel obstruction, there are dilated loops of bowel with air-fluid levels, which show that both fluid and gas are collecting in the intestines. Usually the proximal bowel is dilated, and the distal bowel is not.

Specific X-ray signs can suggest the cause of bowel obstruction.

For example, an "apple core sign”, suggests constriction of the colonic lumen and it’s often due to a ring-shaped colon cancer.

In hemodynamically stable individuals who don’t need emergency surgery, an abdominal CT scan with contrast - given either orally or through enema - is done next to identify the potential cause of the obstruction.

Some specific findings that suggest underlying causes include a "target sign" showing alternating hypo- and hyperdense layers of bowel indicative of intussusception; and the “whirl sign" showing rotation of the bowel mesentery suggesting a volvulus.