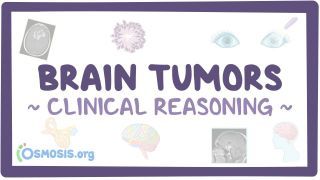 Primary brain tumors are the most common solid tumors in children, while metastatic tumors are more common in adults.

The most common primary brain tumors in both adults and children are gliomas, a subset of these are called astrocytomas.

In adults, gliomas are followed by meningiomas, and in children, medulloblastomas and ependymomas are next on the list. These are followed by the less common schwannomas, oligodendrogliomas, craniopharyngioma, choroid plexus tumors, germinomas, hemangioblastomas, and primary central nervous system lymphoma.

Now, in order of decreasing frequency, metastatic brain tumors most commonly come from cancers of the lung, breast, and melanoma.

The main environmental risk factor for brain tumors is exposure to ionizing radiation, which can come from therapeutic radiotherapy for cancer, or diagnostic imaging like CT scans.

Electromagnetic radiation from cell phones and microwaves is currently being researched as potential risk factors in humans.

Immunocompromised people, like organ transplant recipients or individuals with AIDS are at high risk of primary central nervous system lymphoma caused by the Epstein-Barr virus, or EBV.

The word “subependymal” literally means under the ependymal cells which line the cerebral ventricles, so these tumors are commonly found along the border of the lateral ventricles.

Finally, In addition to renal tumors and pheochromocytoma, cerebellar and retinal hemangioblastomas are features of von-Hippel-Lindau disease.

Individuals with brain tumors typically have some combination of 4 symptoms: headache; focal neurological deficits like cranial nerve palsies or seizures; a neurocognitive disturbance, that often causes a decline in school or work performance; and psychiatric symptoms including depression.

The headache caused by a brain tumor is usually dull, slowly progressive, and poorly localized; usually involving the whole head. Often, the headache is worse in the morning, during a change in position such as bending, or when coughing, sneezing, or Valsalva maneuvering. That’s because during all these states, the intracranial pressure or ICP increases, worsening the headache. Additionally, the headaches may be accompanied by nausea and vomiting in the morning.

Now, pre-verbal children may not be able to communicate a headache. But, because brain tumors in children tend to be infratentorial, there’s a high risk of the tumor interrupting CSF flow and causing obstructive hydrocephalus. Because the skull sutures are still unfused in infants, this may lead to an enlarged head or macrocephaly. This is actually relatively fortunate, because it means the head can accommodate this mass without causing a rapid increase in ICP and deterioration of the child’s neurological status.

As for focal neurological deficits, brain tumors tend to cause gradually developing deficits, which differentiates them from the sudden-onset deficits seen in strokes. But sometimes, the blood vessels in a rapidly-growing tumor can rupture, causing acute bleeding within the tumor, and therefore the acute symptoms of intracranial hemorrhage.

The pattern of symptoms depends on the location of the tumor.

The complex, intertwining visual pathway runs through the brain from eyes to occipital lobe, so brain tumors can cause a variety of visual field disturbances, like bitemporal hemianopsia, which is blindness in the outer half of both the right and left visual fields. This classically occurs with pituitary tumors that compress the optic chiasm. Also, infratentorial tumors which can cause cranial nerve palsies or cerebellar symptoms like ataxia.

Because vestibular schwannomas arise from the eighth cranial nerve, they specifically cause sensorineural hearing loss and tinnitus.

Germinomas of the pineal gland, or pinealomas cause Parinaud syndrome, a unique syndrome that results from the tumor compressing the dorsal midbrain, which is below the pineal gland.

The classic triad includes paralysis of upward gaze, pupillary light-near dissociation; which means the pupils react to near objects, but not to light, and thirdly convergence-retraction nystagmus, which is oscillation of the eyes inwards, that is convergence, and backwards, that’s retraction.

However, this syndrome is not unique to pineal gland tumors, and happens to occur in cases of obstructive hydrocephalus, multiple sclerosis, and strokes.

Another focal neurologic finding is that brain tumors can cause focal seizures, and occasionally they can cause generalized seizures as well. It’s the location of the tumor rather than the size that predicts the seizure symptoms.

For example, a small meningioma located at the cortex is more likely to cause seizures than a large subcortical glioma.

The location of the tumor also determines the pattern of focal seizure symptoms.

For example; a frontal lobe tumor may cause focal tonic-clonic movements in one limb.

On exam, there may be signs of cranial nerve defects as well as signs of increased ICP.

For example, fundoscopic examination of the eyes may reveal papilledema or swelling of the optic disk.

If a brain tumor is suspected, the next step is a brain MRI with contrast, which is optimal for identifying soft tissue structures like tumors.

Sometimes a CT can be helpful as well, because it can more easily identify calcifications, which are seen in oligodendrogliomas and craniopharyngiomas.

Now, if an individual has sudden-onset neurological deficits that are suggestive of intracranial hemorrhage, then a non-contrast CT scan may be done first.

In the acute phase of intracranial hemorrhage, blood may obscure your view of the tumor on imaging. Therefore, a follow-up MRI is usually done about 7 to 10 days after the event, once the blood has been absorbed.

Primary brain tumors that tend to bleed include gliomas and oligodendrogliomas.

Metastatic tumors that are most susceptible to hemorrhage include melanoma, renal cell carcinoma, choriocarcinoma, and thyroid cancer, which can be remembered as MR-CT.

Normally contrast is unable to penetrate the blood-brain barrier, so if there’s contrast enhancement, that means that the tumor has broken down that barrier and leaked in. The MRI also shows the edema surrounding the tumor, or hemorrhage inside the tumor.

Also, large tumors can cause a mass effect, which manifests as a midline shift to the opposite side. If the tumor obstructs the flow of cerebrospinal fluid, then hydrocephalus becomes apparent above the level of obstruction.

Now, “grade” is a basic pathology term referring to the degree of tumor differentiation, or in other words; how closely does the tumor resemble normal tissue.

The higher the grade, the less it resembles normal tissue, and the more aggressive the tumor is.

A grade 4 glioma, also called glioblastoma multiforme, is unfortunately the most common form of glioma.

Glioblastoma commonly shows a rim of enhancement along the margins of the tumor, also called a ring-enhancing lesion. The reason behind this appearance is that the center of the tumor does not enhance because it’s mostly made up of necrotic cells, whereas the peripheral rim is made of live tumor cells.

Cerebral metastasis and lymphoma can also give off this ring-enhancing appearance, so it’s not unique to glioblastoma.

Now, glioblastoma tends to be really aggressive, and in fact may cross from one cerebral hemisphere to the other across a white matter bridge called the corpus callosum, giving the tumor the appearance of a butterfly.

Okay, now on the other hand, low-grade gliomas may or may not enhance, and there’s minimal or no surrounding edema.

A special type of glioma that commonly occurs in children is pilocytic astrocytoma. This tends to arise from the cerebellar hemisphere or along the optic nerve, and appear as a contrast-enhancing mass surrounded by a large cystic component.