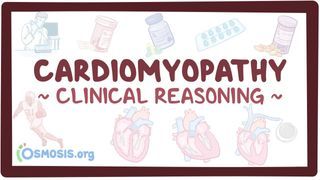 Cardiomyopathy is a broad term used to describe a variety of issues that result from disease of the myocardium.

Now, there are three main types of cardiomyopathy.

The most common type is dilated cardiomyopathy, that’s where all four chambers of the heart dilate, or get bigger, and the heart walls become thin and lose contractility.

Next up is hypertrophic cardiomyopathy and that’s where the walls get thick, heavy, and hypercontractile.

Finally, there’s restrictive cardiomyopathy which is where the heart muscle is restricted, meaning it becomes stiff and less compliant, and that prevents the heart from filling properly.

The muscles and size of the ventricles, though, stay about the same size and only get slightly enlarged.

Restrictive cardiomyopathy may be idiopathic or secondary to a disorder that either deposits harmful substances, like iron or amyloid, in the heart tissue, or there’s fibrosis caused by immune cells or radiation.

In all three types of cardiomyopathy, over time the heart may be unable to do its job effectively, leading to heart failure signs and symptoms like: fatigue, dyspnea, and swelling of the feet.

Individuals may also develop acute symptoms like presyncope or syncope, which is a sudden loss of consciousness usually lasting a few seconds. These individuals are at an increased risk of myocardial infarction.

On auscultation, hypertrophic cardiomyopathy causes a crescendo-decrescendo murmur between S1 and S2, so during systole, where it gets louder as blood first rushes out, and then softer.

On the other hand, dilated and restrictive cardiomyopathies cause an S3 and S4 heart sound on auscultation.

Then comes the ECG, which is usually abnormal in a variety of different ways because there’s significant remodeling of the cardiac muscle in all of the cardiomyopathies.

Identification of the cardiomyopathy type relies primarily upon echocardiographic evaluation, which makes it possible to measure the thickness of the wall, dimensions of the cavities and the pericardial space, as well as the left ventricular function expressed by the ejection fraction.

In dilated cardiomyopathy, the echocardiogram generally shows left ventricle dilation, with an end-diastolic dimension higher than 112% of the predicted value (after correcting for age and body surface area).

Additionally, individuals have a normal or decreased wall thickness, and an ejection fraction below 45%.

Hypertrophic cardiomyopathy is characterized by increased ventricular wall thickness or mass, and the left ventricular volume may be normal or reduced.

Between 12 and 15mm there’s a grey area, which isn’t classified as hypertrophic cardiomyopathy, unless a family member is affected as well.

But any individual with a cardiac wall thickness over 15 mm is diagnosed with hypertrophic cardiomyopathy.

Finally, in restrictive cardiomyopathy, the heart’s shape tends to be normal, so it’s characterized by non-dilated ventricles with impaired ventricular filling, but generally there’s a normal ejection fraction - so between 55 and 70%.

Hypertrophy is typically absent, although infiltrative and storage diseases may cause an increase in left ventricular wall thickness.