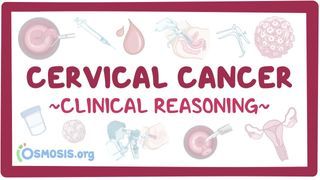 The most frequent type of cervical cancer is squamous carcinoma, and it’s almost always due to human papillomavirus, or HPV.

However, it can take up to two decades for HPV infection to progress through precancerous lesions of increasing severity, and finally to cancer.

So there are two key elements that make cervical cancer unique among cancers.

Second, a pap smear can be done to screen for precancerous lesions.

And if they’re found, it’s possible to remove the precancerous lesions before they progress to cancer.

As a result, cervical cancer is one of the most preventable gynecologic malignancies.

Cervical cancer screening is the cornerstone of prevention, and should be done in both vaccinated and unvaccinated females between the ages of 21 to 65, with regular pap tests.

With the pap test, a thin, long brush is used to scrape cervical cells off the cervix.

The test takes about 2 minutes, but it can cause slight discomfort as well as light spotting may occur afterwards.

A normal pap test is when microscopy shows no cervical cell abnormalities. And when that’s the result, screening can be repeated in 3 years.

Cervical cell abnormalities can show up as either atypical squamous cells, or ASC or cervical squamous intraepithelial lesions, or CSIL.

Management of abnormal pap smear findings depends on the age of the individual.

In females 25 or older, an ASC-US or LSIL result warrants a reflex HPV test.

That’s where a sample of fluid from the pap test is used to look for HPV DNA. If this test comes back negative, the female should get another pap smear and HPV test in 3 years.

On the other hand, if the initial reflex HPV test comes back positive, a colposcopy should be done.

Alternatively, instead of doing the reflex HPV test from the get-go, the pap test can be repeated in one year, and if it comes back negative, the female can go back to routine screening.

If the pap test at 12 months shows any kind of abnormality, a colposcopy should be done.

Now, a colposcopy is done with a magnifying device called a colposcope to get a zoomed in view of the cervix as well as to obtain biopsies.

To better highlight abnormal cells, different solutions, like 3 to 5% acetic acid, or dilute Lugol solution may be applied, which will cause abnormal cells to change color.

The biopsy is examined under a microscope to look for cervical intraepithelial neoplasia - or CIN for short, which comes in 3 grades.

With CIN 1, there are abnormal looking cells only in the deep third of the epithelium.

Now, if the colposcopy shows no CIN, or CIN1, options include follow-up without treatment or a diagnostic excisional procedure.

If CIN1 persists for more than 2 years, a diagnostic excisional procedure can be done.

These come with the downside that they may cause cervical incompetence in future pregnancies - which means that the cervix doesn’t stay shut like it normally would, to seal the uterine cavity.

If the biopsy results come back as CIN 2 or CIN 3, treatment can be done through loop electrosurgical excision, laser excision or laser ablation of the cervical transformation zone.

Then, follow-up involves a pap smear and a reflex HPV test at 12 and 24 months, and after 2 normal results, the female can go back to routine testing, every 3 years.

If any test comes back abnormal during follow-up, a colposcopy should be done, as well as endocervical sampling - which is when biopsies are taken from the endocervical canal.

Now, after an abnormal pap smear with an ASC-H or HSIL result in females 25 or older usually warrants a colposcopy or diagnostic excisional procedures.

If the colposcopy shows CIN 1, options include repeating the pap smear and HPV test at 12 and 24 months, and if both tests come back negative both times, the female can go back to routine screening.

If the colposcopy done for an ASC-H or HSIL result shows CIN 2 or CIN 3, electrosurgical excision, laser excision or laser ablation of the cervical transformation zone can be done.

And even if there is an HPV infection, the immune system may clear it, and these abnormalities may go away on their own within 24 months.

If the third test comes back negative, repeat a fourth pap test again in twelve months - and once two tests in a row come back normal, the female can go back to routine screening, once every three years.

Alternatively, for ASC-US results, a reflex HPV test can be done. If reflex HPV testing shows no HPV, the female can go back to routine screening, once every three years.

With a positive reflex HPV test, management is still to perform a second pap test in 12 months instead of 3 years, with a goal of getting two consecutive normal results at 12 month intervals.

Ok, now, still in the 21 to 24 age group; if the initial pap test, or the second pap test - the one done after 12 months - comes back as ASC-H or HSIL, or if the third pap test - the one at 24 months - shows any kind of abnormal result, including ASC-US, a colposcopy is recommended.

If the colposcopy shows no CIN, or CIN 1, follow-up involves getting a pap smear and colposcopy every 6 months for the next two years.

If two pap smears come back negative for cell abnormalities, and there is still no CIN 2 or CIN 3 on colposcopy, then the female can go back to routine screening, with pap tests once every three years.

If the pap test comes back as HSIL, or the colposcopy results show CIN 2 or 3 for one year, treatment should be done, either through loop electrosurgical excision, laser excision or laser ablation of the cervical transformation zone.

If, on the other hand, the colposcopy comes back as CIN 2 or CIN 3 from the start, both observation and immediate treatment can be options.