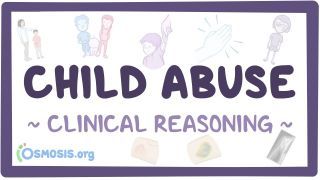 Child abuse is defined as anything that the parent or caregiver does or doesn’t do that causes harm to a child.

Physical abuse includes any intentional physical injury, which results in a physical mark or bruise - and in an extreme form leads to fractures, internal bleeding, and death.

Emotional abuse includes saying and doing things that undermine a child’s emotional development or self-esteem, such as threats, criticisms, or rejection.

Sexual abuse is any form of sexual exploitation of a child.

And neglect is failure of the caregiver to cater for the basic needs of a child, ranging from food, clothing, and shelter, to medical attention, an education, and also love and support.

Neglect also includes abandonment, which is leaving a child alone or unsupervised for a long period of time.

Now, although it’s not considered abuse - corporal punishment - like spanking is no longer considered an appropriate way to discipline a child.

Spanking young children can cause serious injury, and the child is often unlikely to understand the connection between the behavior and the punishment.

Repeated spanking may cause agitated, aggressive behavior in the child, and models aggression as a way to resolve conflict.

Spanking and even threats of spanking, alters the parent–child relationship, making other forms of discipline less effective when physical punishment is no longer an option, such as with adolescents.

Finally, because spanking can help the parent relieve their anger, it can increase the chance that a parent will spank a child in the future.

In some situations, repeated spanking can lead to more aggression which can lead to leaving a physical mark - a sign of physical abuse.

Child abuse is particularly common among children with higher needs.

That includes premature or colicky infants, as well as children with physical, psychological, or cognitive disabilities.

Approximately one-third of cases occur in infants below 6 months of age, one-third from 6 months to 3 years, and one-third in children older than three.

Most of the abuse involves the child’s parents, and mothers are involved more often than fathers due to increased exposure to the children.

In addition, parents who were victims of child abuse or domestic violence are more likely to be abusive parents.

There are some important clues that can suggest that child abuse is happening.

These include a history of repeated hospitalizations for unexplained injuries, a history of a sexually transmitted infection, an explanation that’s inconsistent with the severity of an injury.

For example the caregiver claiming that a child was splashed by hot oil, but having a burn injury that has a prominent edge like being held in something hot rather than a splash pattern.

Alternatively, a story that’s inconsistent with the developmental stage of the child.

For example a 3-month old baby that crawled and fell down the stairs, when crawling doesn’t usually begin until 6 to 10 months of age.

Sometimes, a child might seem frightened of their caregiver, rarely touching or looking at them, and crying when it’s time to go home.

If child abuse is suspected, it’s ideal to interview the child and caregivers separately whenever possible.

On clinical examination, it’s important to see if a child generally appears well cared for.