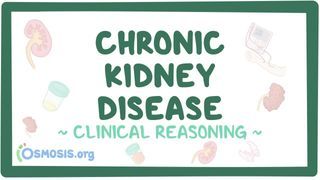 Chronic kidney disease, or CKD, describes a decrease in kidney function with an estimated glomerular filtration rate—or eGFR—below 60 milliliters per minute per 1.73 square meters, that happens over a minimum of three months, regardless of the cause.

Now, if there’s already kidney damage- like with glomerular disease, tubulointerstitial disease, vascular disease or congenital renal disease- but the eGFR is above 60 milliliters per minute per 1.73 square meters, then this is still CKD, because all these conditions progressively affect the renal function and over time, without treatment, eGFR decreases.

Now, the causes of CKD can be split into three categories: prerenal, intrarenal, and postrenal causes.

Prerenal CKD causes are due to a decrease in renal perfusion like in heart failure and cirrhosis.

Finally, there’s postrenal CKD, which is most commonly caused by prostate disease.

Also, repeated episodes of pyelonephritis can lead to CKD.

Diagnosing CKD usually requires having past measurements of the eGFR, albuminuria or proteinuria and past urine dipstick and sediment examinations.

If that isn’t possible, the individual needs to have multiple assessments over a period of three months to confirm that the problem is chronic.

That means getting a serum creatinine to calculate the eGFR, along with urinalysis- both by dipstick and microscopy- to identify any abnormalities in the urine- such as hematuria and checking the urine albumin levels.

Additionally, an abdominal ultrasound is done because CKD can cause the scarring which makes the kidneys small and echogenic.

However, it depends on the cause, since some causes of CKD like diabetic nephropathy, leave the kidneys normal-sized.

Now, based on eGFR, CKD is classified into five stages- called G-stages - measured in units of milliliters per minute per 1.73 square meters. G1 is when eGFR is above 90, but there’s an underlying kidney disease.

G2 is when eGFR is between 60 and 89, and this is considered mildly decreased kidney function.

G3a is when eGFR is between 45 and 59, and this is mildly to moderately decreased kidney function.

G3b is when eGFR is between 30 and 44, and this is moderately to severely decreased kidney function.

G4 is when eGFR is between 15 and 29, and this is severely decreased kidney function.

Finally, there’s G5, where eGFR is below 15, and this is end-stage renal disease or ESRD.

For individuals with stage G5 CKD, if they’re also on dialysis, a D is added to the G-stage, so it’s called G5D.

Now, albuminuria or the albumin excretion rate has also been added to CKD staging and they’re called the A-stages.

A1 is when the albumin excretion rate is less than 30 milligrams per day and this is normally to mildly increased albuminuria.

A2 is when the albumin excretion rate is between 30 and 300 milligrams per day and this is moderately increased albuminuria.

Finally, there’s A3 where the albumin excretion rate is over 300 milligrams per day and this is severely increased albuminuria.

Individuals with CKD can develop signs and symptoms due to their decreased renal function, such as edema and oliguria- meaning a urine output less than 400 milliliters per day, fatigue, weakness, and anorexia.

Individuals with CKD may also have hypertension from sodium retention, increased activity of the renin-angiotensin-aldosterone system, and secondary hyperparathyroidism.

Additionally, the individual may have symptoms from the underlying disease, such as gross hematuria with IgA nephropathy or shortness of breath from heart failure.

CKD can also cause complications like anemia which may be due to the kidney’s making insufficient erythropoietin.

In individuals that undergo hemodialysis, anemia can be caused by regular blood loss during hemodialysis sessions.

Individuals with CKD are also prone to iron deficiency anemia for several reasons.

Some have a diet low in iron, blood loss during hemodialysis or impaired absorption of iron.

Another complication in CKD is mineral and bone disorder, sometimes called CKD-MBD for short.

CKD-MBD develops for a number of reasons. First, the kidneys can’t excrete phosphate, leading to hyperphosphatemia and improper conversion of 25- hydroxyvitamin D to active 1,25 dihydroxyvitamin D or calcitriol which is the active form of vitamin D.

Hyperphosphatemia and hypocalcemia lead to increased levels of parathyroid hormone, which is a type of secondary hyperparathyroidism and the parathyroids become bigger.

Sometimes, PTH can be the first one to increase, due to increased PTH gene expression, so phosphate and calcium levels can remain normal for a long period of time.

Now, after a long period of time with secondary hyperparathyroidism, the large hypertrophied parathyroids start secreting even more PTH, regardless of triggers like hyperphosphatemia, hypocalcemia, or vitamin D deficiency. This is called tertiary hyperparathyroidism. In this case, really high levels of PTH can lead to hypercalcemia.

Another complication is hyperkalemia, which can cause symptoms like palpitations, paresthesias, and muscle weakness.

Finally, CKD can lead to metabolic acidosis which can lead to dyspnea or if it’s chronic, may be asymptomatic.

Now, in individuals with ESRD there may be uremia- which is caused by the accumulation of uremic toxins, including urea itself. Symptoms include nausea, vomiting, weight loss, fatigue, and pruritus.

There’s also uremic pericarditis- which can cause chest-pain and on auscultation, there’s a pericardial friction rub.

Clinically, there’s progressive encephalopathy - that causes confusion, asterixis, and myoclonus. It can also cause distal symmetrical polyneuropathy and paresthesias. Finally, in severe cases it can cause seizures and coma.

There can also be sexual dysfunction that presents with decreased libido and erectile dysfunction in males and amenorrhea in females.

Individuals with CKD are at higher risk for cardiovascular disease, so cholesterol, triglycerides, LDL, and HDL levels are also checked.

The most common finding in CKD is high triglyceride levels.

Electrolyte levels and an ABG are done to assess for metabolic acidosis.

If the individual’s is at stage G3, then a CBC is checked because CKD can cause a normocytic and normochromic anemia.

In iron deficiency, serum iron is low, TIBC is high, and ferritin is low.

Calcium and phosphate levels can remain normal for a long time, typically until the individual reaches stage G4, where there will be hyperphosphatemia and hypocalcemia.

An abdominal ultrasound is usually done to check the size of the kidneys and to look for evidence of hydronephrosis which can cause obstruction.

When PTH levels are high, a parathyroid ultrasound can be done to see if the parathyroid glands are larger.

Treatment of CKD starts with stopping any nephrotoxic medications like NSAIDs and aminoglycosides, and making sure the cause isn’t prerenal - in which case IV saline can be given to restore the intravascular volume.

After that, the goal is to slow the progression of renal disease, rather than stopping it.

First, dietary recommendations include keeping the caloric intake between 30 and 35 kilocalories per kilogram per day to help manage body weight, since a high BMI is a risk factor for worsening renal function. That works out to just about 2300 kcal per day for a 70 kilogram adult.

Now, if the individual is not on dialysis, then protein restriction is recommended- 0.8 grams per kilogram per day.

If the individual has hypertension or volume overload or proteinuria, then sodium restriction is set at about 2 grams of sodium per day which is roughly one third of a tablespoon of salt daily.

Additionally, with volume overload, an oral loop diuretic- like furosemide is used.