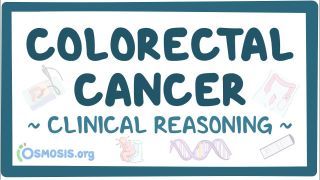 Colorectal cancer or CRC is a malignancy that arises in the large intestines, which includes both the colon and rectum. It is the most common cancer of the gastrointestinal tract, and a major cause of death and disease around the world.

Most colorectal tumors develop due to sporadic mutations, but some are caused by inherited conditions like familial adenomatous polyposis and Lynch syndrome.

Individuals at medium-risk for CRC include the elderly, and those that smoke, drink alcohol, eat red meat, and are obese.

Sometimes, especially early on, colorectal cancer is asymptomatic and it’s discovered by screening using either stool based tests or direct visualization.

One stool based test is the guaiac-based fecal occult blood test or gFOBT which detects blood in the stool.

Another test is fecal immunochemical test or FIT. This time instead of guaiac, there’s an antibody that attaches to any hemoglobin that’s present in the stool.

Finally there’s the FIT-DNA test-which combines FIT with a test that detects genes associated with colorectal cancer in the stool, such as mutations in the adenomatous polyposis coli gene or APC gene.

One direct visualization test is a colonoscopy, which is when a camera is inserted retrograde into the colon and rectum using a flexible tube and biopsies are taken.

Another one is a flexible sigmoidoscopy, which uses a flexible tube to visualize the rectum and sigmoid colon.

Finally, there’s CT colonography or a virtual colonoscopy- which is where CT scans are digitally assembled to produce 3-dimensional views of the colon.

If a suspicious lesion is seen on a direct visualization test, it should be further investigated using colonoscopy and biopsy.

A common example of a suspicious lesion is a colorectal polyp, which is a small bump or overgrowth of tissue along the lining of the colon or rectum. The most common polyps are adenomatous polyps, also called colonic adenomas.

Sessile adenomatous polyps are more likely to become malignant, so they need to be closely observed.

If a polyp is found during a colonoscopy or during a flexible sigmoidoscopy, then a biopsy should also be done to rule out or confirm cancer.

On histology, polyps can be tubular, where the growth has little holes within it on a cross section, or villous where it looks like a little tree, or tubulovillous where it’s a mix between the two. Among these, villous polyps are most likely to be malignant.

Now, if an adenomatous polyp can’t be entirely removed using the colonoscopy, then surgical resection may be needed, especially if it’s a polyp that has a high-risk for malignancy, like a sessile polyp.

Another type of polyp is an inflammatory polyp, and these typically develop after a flare of ulcerative colitis or Crohn's disease, and they usually don’t become malignant and don’t require excision.

A final group are hamartomatous polyps which are normally made up of a mixture of tissues and have a distorted architecture.

How we screen for CRC depends on risk and which method is used. For medium-risk individuals, one option is to do annual screening starting at age 50 with gFOBT or FIT. If FIT-DNA is used, screening can be done every one to three years. CT colonography or flexible sigmoidoscopy should be done every 5 years, while colonoscopy- which is the best screening test- should be done every 10 years.

With high-risk individuals, screening starts earlier than usual. if an individual has a family history of sporadic CRC, then screening should start at age 40 with a colonoscopy and it should be repeated every 5 years. Alternatively, a FIT test can be done annually.

Individuals with inflammatory bowel disease should get a colonoscopy every year.

Typically, screening stops between age 75 and 85, depending on the individual’s overall health.

Now, these guidelines are a bit different for hereditary colorectal syndromes. Lynch syndrome, which is also called hereditary nonpolyposis colorectal cancer or HNPCC is the most common cause of inherited CRC. It should be suspected in individuals that develop CRC before age 50, or develop other cancers typically seen in Lynch syndrome like endometrial, ovarian, small bowel, stomach, and renal cancer.

Lynch syndrome is caused by a mutation in a DNA mismatch repair gene or the EPCAM gene. For a definitive diagnosis, the mutations need to be confirmed using genetic testing.

Familial adenomatous polyposis or FAP is an autosomal dominant genetic disease caused by mutations in the Adenomatous Polyposis coli gene or APC gene.

FAP can also cause extracolonic symptoms, such as polyps in the stomach and duodenum, desmoid tumors- which are connective tissue tumors- and these are usually localised in the abdomen and sometimes individuals can present a nodular thyroid that in some cases may develop into thyroid cancer.

There are also some variants of FAP, like Gardner syndrome which causes multiple colorectal polyps as well as osteomas, which are bony growths that develop in the mandible, and soft tissue tumors like epidermoid cysts, fibromas, and desmoid tumors.

Another one is Turcot syndrome- which consists of multiple colorectal polyps and brain tumors, like medulloblastomas and gliomas. Turcot syndrome can also be associated with Lynch syndrome.

Screening for individuals with classic FAP begins around age 10 with an annual flexible sigmoidoscopy or colonoscopy.

With classic FAP, the risk for eventually developing CRC is about 100%, and since every polyp cannot be removed endoscopically, a colectomy is typically recommended.

For individuals with attenuated FAP, CRC typically develops later in life, so screening begins at age 25 and is done every one to two years using colonoscopy.