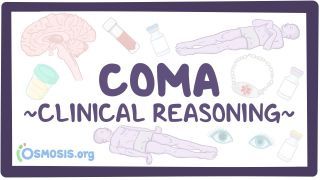 One of the many higher-order functions of our brains is maintaining consciousness.

Consciousness includes both arousal or wakefulness, as well as awareness.

Now, arousal is maintained by a network of neurons in the pons and midbrain that form the ascending reticular activating system, or ARAS.

The ARAS sends out neuronal connections to both cerebral cortices, which are responsible for producing awareness.

So damage to the ARAS in the brainstem, both cerebral hemispheres, or damage to the tracts connecting them can affect a person’s consciousness.

Now, a coma is a state of profoundly decreased arousal resembling sleep, however, a comatose individual cannot be aroused by external stimuli.

“Stupor”, “obtundation”, and “lethargy” are terms that reflect states that fall between normal arousal and a coma, but individuals in these states can be aroused by external stimuli.

Arousability is assessed by noise stimulation, such as shouting in the individual’s ear, or somatosensory stimulation, like pressing on the supraorbital ridge or squeezing the trapezius muscle.

Now, the differential diagnosis for coma is large, but they fall into 4 broad categories: toxic, such as opioid toxicity, infectious, such as sepsis or meningitis and encephalitis, metabolic, which includes electrolyte imbalances or organ dysfunction, and structural, such as a stroke or subdural hemorrhage.

When a person is found to already be in a comatose state, it’s helpful to get information from witnesses, family members, friends, and paramedics, as well as from medical alert bracelets.

If the comatose state had an abrupt onset it may be due to stroke, seizure, subarachnoid hemorrhage, or cardiac arrest. Whereas a gradual onset may be due to a brain tumor, subdural hematoma, infection, or metabolic disorder.

Prior to the coma, transient neurological symptoms like hemiparesis, hemisensory loss, or diplopia suggest a stroke.

A history of a fall may suggest traumatic brain injury, while a recent fever may suggest infection.

Additionally, empty pill bottles, a suicide note, or a history of psychiatric disease like depression or schizophrenia are clues to a suicidal overdose. Young children can also accidentally overdose on medications in the household.

The past medical history is extremely helpful. For example, in an individual with diabetes, hypoglycemia and hyperglycemic states like diabetic ketoacidosis or hyperglycemic hyperosmolar state should be considered.

Fever could be from an infection, as well as heat stroke, thyrotoxicosis, or a anticholinergic or salicylate toxicity.

Tachycardia can be due to sepsis or hypovolemia, and bradycardia may be due to a medication overdose from beta-blockers or calcium channel blockers, which can result in cardiac conduction blockade.

Hypertension, bradycardia, and an irregular breathing pattern is called the Cushing’s triad, and indicates an increased intracranial pressure.

Kussmaul’s respirations are characterized by deep, laboured breathing, and suggest an acidotic state, like diabetic ketoacidosis.

Jaundice, spider angioma and palmar erythema point to liver disease, a bitten tongue could be from a convulsive seizure, and needle tracks indicate intravenous drug use.

A goiter in a comatose individual indicates either severe hypothyroidism, which is called myxedema coma, or thyrotoxicosis.

On fundoscopic examination of the eyes, subhyaloid hemorrhages may indicate a subarachnoid hemorrhage, exudates may clue towards hypertensive encephalopathy, and papilledema indicates an increased intracranial pressure.

Now, an important part of assessing a comatose person is specifically assessing their level of consciousness, looking for signs of brainstem dysfunction, and performing a motor exam.

The Glasgow Coma Scale, or GCS is a 15-point scale that can help determine how “bad” the coma is, which may help us make some decisions.

For example, a GCS score less than 8 may be an indication for intubation.

However, the GCS was not developed to diagnose a coma.

To remember the point system, think “4 eyes” for eye movement, the “Jackson 5” for verbal response, and a “6 cylinder motor” for the motor response.

Brainstem function can be assessed by looking at the brainstem reflexes - which includes the pupillary, corneal, and vestibulo-ocular reflexes.

When shining a light on the pupils - pinpoint, unreactive pupils may indicate structural damage to the pons, or an opioid overdose. A unilateral, dilated, unreactive pupil suggests an expanding intracranial mass causing cerebral herniation and compression of the 3rd cranial nerve. Bilateral, dilated, unreactive pupils may indicate an overdose of amphetamines, cocaine, or tricyclic antidepressants. Fixed, mid-sized pupils are classic for a midbrain injury. Interestingly, the pupils are usually spared in metabolic disorders causing coma.

Finally, the vestibulo-ocular reflex is assessed in two ways: the oculocephalic, or “doll’s eye” maneuver, or the more sensitive caloric test. In the doll’s eye maneuver, the head is abruptly turned from one side to the other. In a normally functioning brainstem, the eyes move in the opposite direction. For example, turning the head to the left should cause the eyes to move to the right. Brainstem dysfunction should be suspected if the eyes move in the same direction as the head.

As for caloric testing, the external auditory canal is irrigated with cold ice water. Normally, the eyes deviate towards the ear canal being irrigated. Absence of an eye response raises suspicion for brainstem dysfunction.

Alright, next comes the motor exam. Since the individual is comatose, you cannot assess muscle power, however, you can assess posture, and muscle tone.

Posture is like a cheap GPS device, it’ll tell you where the lesion is roughly, but not exactly.