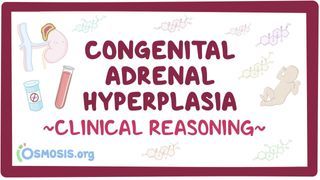 Congenital adrenal hyperplasia is a disease where there are enlarged adrenal glands that are present at birth, and it can be caused by a number of enzyme deficiencies in the adrenocortical steroid pathway.

Low level of cortisol make the pituitary release more ACTH, which stimulates proliferation of adrenal cells, resulting in the enlargement, or hyperplasia, of the adrenal gland.

Adrenal steroid hormone production takes place in the three layers of the adrenal cortex - the zona glomerulosa, where aldosterone synthesis takes place, the zona fasciculata, that’s in charge of cortisol production and finally, the zona reticularis is where androgens are made.

Ok, now the first step for the synthesis of all three adrenal hormones is when cholesterol desmolase converts cholesterol to pregnenolone.

In the zona glomerulosa, pregnenolone is first converted to progesterone, with the help of 3-beta-hydroxysteroid dehydrogenase, or 3-beta-HSD.

Progesterone becomes 11-deoxycorticosterone under the influence of 21-hydroxylase.

Some of the pregnenolone and progesterone can be used to make cortisol, by making their way in the zona glomerulosa.

17 hydroxypregnenolone is then also turned into 17 hydroxyprogesterone by the enzyme 3 beta-hydroxysteroid dehydrogenase.

Finally, some of the 17 hydroxypregnenolone and 17 hydroxyprogesterone are also used to make androgens.

Dehydroepiandrosterone can also be turned into androstenedione by the same 3 beta-hydroxysteroid dehydrogenase enzyme.

Both dehydroepiandrosterone and androstenedione can then be converted to testosterone.

The most common enzyme deficiency is 21 hydroxylase deficiency. It causes over 90% of congenital adrenal hyperplasia cases, and it comes in two flavors - classic and non-classic.

The classic form presents with symptoms in infants or young children, and it results in one of two clinical syndromes: a salt-losing form, or a non-salt-losing, or simple virilizing, form.

Non-classic 21-hydroxylase deficiency is even milder than the simple virilizing form, so it presents later in childhood, during adolescence, or in young adulthood.

Now, in both classic and non-classic presentations, there are excess androgens which lead to different symptoms depending on genetic sex, and the age of presentation.

With classic 21 hydroxylase deficiency, neonate girls have atypical genitalia, meaning an enlarged clitoris, and sometimes a urogenital sinus, which is when the urethra and the vagina have the same opening. Partial or complete fusion of the labial folds may also occur. Internal female reproductive organs and structures - like the uterus and ovaries - are normal.

Male infants usually have normal male external genitalia, but may have subtle findings such as hyperpigmentation of the scrotum or an enlarged phallus.

With the salt losing form, both male and female neonates can have a salt-losing adrenal crisis, because of the aldosterone deficiency. This crisis is associated with hyponatremia, hyperkalemia, and a general failure to thrive.

The simple virilizing form, on the other hand, does not lead to a salt losing crisis, but can cause additional symptoms in male toddlers, like early growth of pubic and axillary hair.

Additionally, a karyotype should be obtained in neonates with ambiguous external genitalia, to confirm genetic sex.

The screening test is performed a few days after birth, and a serum concentration of 17 hydroxyprogesterone above 1200 nanograms per milliliter is diagnostic of 21-hydroxylase deficiency.

Bear in mind that if the mother received glucocorticoids during pregnancy, that can lower 17-hydroxyprogesterone levels causing a false negative result. That’s why if classic 21-hydroxylase deficiency is suspected, a negative test should be repeated one to two weeks later, while carefully monitoring salt loss in the meantime.

Once the diagnosis is established, individuals with classic 21 hydroxylase deficiency require lifelong substitution treatment with glucocorticoids like hydrocortisone, in a dose of 20 to 30 milligrams per meter squared per day, divided thrice daily - for example, newborns have a body surface of 0.25 meters squared on average, so their dose should be somewhere in between 4 and 6 milligrams per day, divided in 3 doses.

Glucocorticoids inhibit pituitary adrenocorticotropic hormone, or ACTH, which prevents further hyperplasia of the adrenal glands and inhibits excess androgen synthesis. Older children and adults can be given prednisone or daily dexamethasone, preferably before bedtime.

Additionally, all individuals with classic 21-hydroxylase deficiency should be started on mineralocorticoids like fludrocortisone along with sodium supplementation with 1 to 3 grams of salt per day divided in several feedings - even if they don’t have a clinically apparent salt wasting form.

Fludrocortisone doses typically need to be lowered after an infant is 1 year old because sensitivity to mineralocorticoid increases as the kidneys mature in the first year of life.

Response to therapy is monitored by periodic measurements of serum 17-hydroxyprogesterone, androstenedione with a goal of keeping it between 400 to 1200 nanograms per deciliter.

Mineralocorticoid hormone status is assessed by blood pressure measurements and plasma renin activity, both of which should be in the normal range for age.

Low plasma renin activity, on the other hand, reflects overtreatment, so fludrocortisone doses should be reduced.

Additionally, growth velocity should be assessed at every visit. This represents how much the child has grown in height and weight since the last consult, and normal growth velocity charts can be used for comparison.

Finally, glucocorticoid treatment can lead to premature closing of the epiphyseal plates and a short adult height - so the rate of skeletal maturation, or bone age should be determined at least once a year after the age of two, with an x-ray of the left wrist and hand.

If bone age is advanced, glucocorticoid doses should be lowered.

Now on occasion, individuals with classic 21-hydroxylase deficiency can have an adrenal crisis due to a physical stress - like illness, severe injury, or surgery - although this is typically rare after the introduction of neonatal screening.

With an adrenal crisis, symptoms include hypotension or shock, vomiting, abdominal pain, fever, and mental status changes ranging from confusion to coma. There can be hypoglycemia and electrolyte imbalances as well.

The first step in treatment is an IV bolus of 5 percent dextrose diluted in 0.9 percent saline, at a dose of 20 milliliters per kilogram, over one hour.

Hyperkalemia typically improves rapidly from the mineralocorticoid action of high- dose hydrocortisone, but if it persists, it can be corrected with glucose and insulin.

Affected females usually have typical female external genitalia at birth. The disease becomes apparent in adolescence, when females develop primary amenorrhea, or no menstruation by the age of 15, acne, hirsutism and polycystic ovaries on account of excess adrenal androgens.