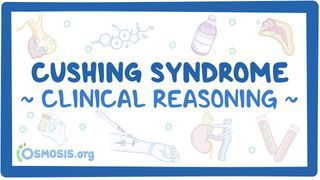 Cushing syndrome or Cushing’s disease is an endocrine disorder with elevated cortisol levels in the blood.

For cortisol levels to stay within the normal range, there’s also a negative feedback mechanism in place. This means that high levels of cortisol tell the hypothalamus and the pituitary to decrease their production of CRH and ACTH, respectively.

Now, with Cushing syndrome, the high cortisol levels are usually due to a benign tumor of the pituitary, called an adenoma, that secretes excess ACTH.

Excess cortisol can also appear in the context of some other tissue that secretes ACTH or an adrenal mass that secretes too much cortisol.

In fact, even exogenous glucocorticoids, given for an autoimmune condition, can also cause Cushing syndrome.

No matter the cause, the symptoms are the result of the effects of excess cortisol on various target tissues.

There’s increased breakdown of most types of tissue, which leads to muscle wasting and thin extremities; skin thinning; easy bruising; abdominal striae, or lines; and bone thinning, or osteoporosis, which can lead to fractures. At the same time, there’s fat redistribution, so classic findings include a round, full moon shaped face, a buffalo hump - which is a fatty hump on the upper back, and truncal obesity - where fat gathers around the abdomen and trunk rather than in the limbs.

Finally, excess cortisol causes hypertension and hyperglycemia which can progress to diabetes mellitus, as well as increased vulnerability to infections - particularly fungal infections of the skin.

When Cushing syndrome is suspected, the first step is to exclude an iatrogenic cause - like glucocorticoid therapy for an autoimmune condition. If that’s ruled out, there are three tests that can be performed to assess cortisol levels.

First, a late night salivary cortisol level can be determined because that’s usually when levels are low.

In Cushing’s, the circadian secretion of cortisol is lost, so cortisol levels are high all throughout the day. A value higher than 2 nanograms per milliliter suggests Cushing’s - however, this test may not be the best first choice for people who don’t have a usual sleep schedule, like night owls, or people who do shift work.

A second test is a 24 hour urinary free cortisol level. When there’s excess plasma cortisol it leads to excess cortisol in the urine, and a value that’s greater than three times the upper limit of normal suggests Cushing syndrome.

For both of these tests it’s necessary to repeat an abnormal test, because the diagnosis requires having two abnormal results.

Now the third testing option is the low-dose overnight dexamethasone suppression test, and there’s two ways to do it - the first way is to administer 1 milligram of dexamethasone at 11 PM.

Dexamethasone has a similar structure to cortisol, so it normally inhibits ACTH and cortisol secretion. So, if the serum cortisol level is higher than 1.8 micrograms per deciliter between 8 and 9AM the following morning, then it confirms the diagnosis of Cushing syndrome.

The second way takes 2 days, and it starts with determining serum cortisol levels at 9 AM on day 0, followed by administration of 0.5 milligrams of dexamethasone every 6 hours for 48 hours - so 4 milligrams in total - and then checking the serum cortisol level. As before, a value higher than 1.8 micrograms per deciliter confirms the diagnosis of Cushing syndrome.

Ok, so once the diagnosis is established, the next step is to determine the cause. This means determining whether increased cortisol secretion is ACTH dependent, which is the majority of cases, or ACTH independent.

Then, there’s ectopic ACTH secretion, which is when ACTH is coming from some tissue other than the pituitary - the most common culprit being small cell lung carcinoma.

However, to confirm the diagnosis, an additional test is recommended to clearly differentiate Cushing disease from ectopic ACTH secretion.

With the CRH stimulation test, intravenous CRH is administered, and serum ACTH and cortisol samples are obtained before the CRH injection and 45 minutes afterwards.