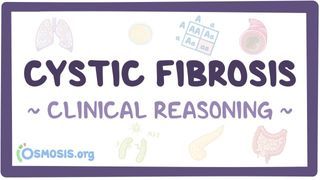 Cystic fibrosis, or CF, is an autosomal recessive disorder in which there’s a mutated “cystic fibrosis transmembrane conductance regulator” or CFTR protein.

The mutated CFTR protein causes secretions to be abnormally thick and sticky - and they build up in the lungs, pancreas, and other organ systems.

The most common mutation that leads to cystic fibrosis is the “∆F508” mutation. This mutation causes the CFTR protein to not make it to the cell membrane.

Without CFTR protein on the epithelial surface, chloride ions aren’t pumped into the secretions, and that leaves the secretions thick and sticky.

In some countries, diagnosis of cystic fibrosis is done with newborn screening. Usually it’s done by detection of a pancreatic enzyme called immunoreactive trypsinogen or IRT, which is released into the fetal blood when there’s pancreatic damage from CF.

A confirmatory test is the quantitative pilocarpine iontophoresis, better known as the sweat test, which detects high levels of chloride in the sweat.

In both cases, DNA testing is done to detect the most common cystic fibrosis-related mutations.

If two or more of these mutations are detected, one in each chromosome then the diagnosis of CF is confirmed.

Having said that, even if only one DNA mutation or no mutation at all is detected, an individual may still have cystic fibrosis, due to some rare mutation that standard genetic testing cannot detect.

Likewise normal sweat chloride levels cannot definitely exclude CF. So, if CF is still suspected, then the sweat test can be repeated and an expanded DNA analysis can be done to look for even more possible mutations.

Another test is the nasal potential difference test, which measures the voltage across the nasal epithelium, which is a reflection of CFTR function.

On repeat testing, if the sweat chloride is higher than 60 mmol/L, or if two cystic fibrosis- related mutations are detected, or if the nasal potential difference test is abnormal, then the diagnosis is confirmed. But if none of these are found, then cystic fibrosis is very unlikely.

In a newborn baby, thick secretions can affect the baby’s meconium, or first stool. The meconium can get so thick and sticky that it might get stuck in the baby’s intestines and not come out, causing small bowel obstruction. This is called a meconium ileus, and it’s when a baby doesn’t pass meconium within the first day of life. Sometimes the bowel obstruction can also cause bilious vomiting and abdominal distention. A rectal examination reveals an empty rectum with no meconium, but with a normal anal sphincter tone. That’s unlike Hirschprung’s disease, which also results in a failure to pass meconium, but had abnormally increased sphincter tone.

Now, meconium ileus is a surgical emergency, because it can lead to bowel perforation and peritonitis. That can lead to septic shock, which can ultimately cause organ failure and death.

If a baby is septic, the vital signs show temperature instability - either a fever or hypothermia, tachycardia, tachypnea, and hypotension. And there’s typically a distended and rigid abdomen, and a baby that looks mottled and lethargic.

In a meconium ileus, abdominal x-rays show dilated bowel loops and air-fluid levels proximal to the obstruction,, along with a “soap bubble” or “ground glass” appearance at the site of the obstruction due to small air bubbles mixed in with the meconium.

There can also be linear or curved calcifications which are a sign of calcified intraperitoneal meconium, in the case of meconium peritonitis.

If the diagnosis is still unclear, then a water-soluble contrast enema can be done, and it would typically show a small-caliber colon or microcolon along with little masses of meconium plugging the terminal ileum.

Treatment of a meconium ileus requires decompression of the gastrointestinal tract through the nasogastric tube, while giving IV fluids. After that, if there’s no perforation and peritonitis, then a hypertonic contrast enema can be given to break up the meconium. If that doesn’t work, or if there’s perforation and peritonitis, then surgery is needed.

Now, in early childhood, the most prominent effect of CF is pancreatic insufficiency. This happens because thick secretions jam up the pancreatic ducts, preventing digestive enzymes from making it into the small intestine. Without those pancreatic enzymes, fat isn’t absorbed, causing steatorrhea, or fat-containing stools. Over time, this can lead to poor weight gain and failure to thrive. The backed-up digestive enzymes can also degrade the cells lining the pancreatic ducts, and cause an acute pancreatitis, or if there are repeated episodes, a chronic pancreatitis.

A diagnosis of pancreatic insufficiency can be made when the levels of elastase, a pancreatic enzyme, in the stool are below 200 micrograms per gram. If the levels are that low, then children are given extra calories in their diet, supplementation with fat-soluble vitamins, which are A, D, E, and K, and pancreatic enzyme replacement therapy, or PERT, which contains enzymes like lipase, amylase, and protease.

In addition, the destruction of pancreatic tissue can also reduce the endocrine function of the pancreas, causing insulin-dependent diabetes mellitus. That’s why screening begins at age 10 and is repeated annually with an oral glucose tolerance test. This is where a person is given 75 grams of glucose, and 2 hours later, if the blood glucose is 139 milligrams per deciliter or lower it’s normal, if it’s 140 to 199 it’s prediabetes, and if it’s 200 or above it’s diabetes.

For abnormal results, additional testing with the fasting glucose test is done. That’s where the person doesn’t eat or drink anything except water for 8 hours. After that a blood glucose level of 99 milligrams per deciliter or lower is normal, 100 to 125 indicates prediabetes, and 126 or higher indicates diabetes.

In addition there’s the HbA1c, which is the proportion of glycated hemoglobin in the blood. HbA1c levels of 5.6% and below are normal, 5.7% to 6.4% indicates prediabetes, and 6.5% or higher indicates diabetes.

In terms of treatment, cystic fibrosis- related diabetes can be managed with subcutaneous insulin injections. Usually, a long acting insulin - like Detemir or Glargine is introduced first, starting at 0.1 units/kg right before bedtime. Doses are then adjusted to keep fasting blood glucose between 70 and 90 milligrams per deciliter.

Usually, as children grow, they begin to develop thick mucus secretions in their lungs which become colonized with bacteria.

Chronic bacterial infection and inflammation can lead to bronchiectasis, which is damage to the airway walls that causes permanent dilation of the bronchi that fill up with mucus. This causes a recurrent cough with lots of sputum, and if the inflammation erodes into a blood vessel, there can be hemoptysis.

Pulmonary function tests, or PFTs, show an obstructive pattern, meaning a decrease in the forced expiratory volume in one second or FEV1 and the ratio of FEV1 to forced vital capacity FEV1/FVC.