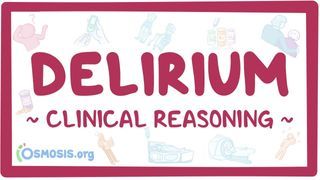 Delirium is an acute disturbance in consciousness that leaves a person confused.

Delirium is sometimes used to describe the observable manifestations of an underlying encephalopathy.

Okay, so in general, the symptoms of delirium represent a shift from the individual’s baseline mental status. That could mean hyperactivity and agitation or it could mean hypoactivity and drowsiness in a person that didn’t experience these before.

Inattention or difficulty focusing is one of the earliest symptoms of delirium, but it can be subtle initially, and family members typically say that the person “isn’t acting themselves”.

Oftentimes, individuals are distractible and cannot maintain a coherent flow of ideas.

Affected individuals develop symptoms within hours to days, and symptoms tend to fluctuate in severity during the day.

These elements differentiate delirium from dementia and psychiatric disorders, which tend to be more chronic - occurring over months to years, and don’t rapidly fluctuate.

Perceptual disturbances including illusions, delusions, and hallucinations are common in delirium; and the hallucinations can be visual, auditory, or bodily perceptions.

Other features of delirium include sleep-wake cycle disturbances, hypersensitivity to light and sound, and “sundowning”; which is worsening of symptoms at night.

For diagnosis, the individual who has an acute illness must develop confusion. And the confusion shouldn’t be better explained by another neuropsychiatric syndrome, like dementia, psychosis, anxiety, or depression.

Some clinical instruments like the confusion assessment method, or CAM can be helpful.

CAM captures 4 features: the symptoms are acute in onset and have a fluctuating course, there’s inattention, there’s disorganized thinking, and there’s an altered level of consciousness, ranging from agitation to lethargy.

The presence of the first and second feature, along with either the third or the fourth feature confirms the diagnosis of delirium.

Alright, now once the diagnosis of delirium is confirmed, the next step is to identify the underlying acute medical illness.

The first thing you want to do is assess the vital signs. Fever may indicate an infection, ranging from an occult urinary tract infection to a primary central nervous system infection like meningitis and encephalitis. Fever can also be present in non-infectious causes, like an anticholinergic, aspirin, or MDMA overdose, thyrotoxicosis, and thrombotic thrombocytopenic purpura, or TTP.

Next, the fingerstick blood glucose should be checked to look for hypoglycemia which can be corrected with IV dextrose.

Next, a complete blood count, or CBC can be helpful to identify anemia, or the thrombocytopenia in TTP.

Serum electrolytes including sodium, calcium, and magnesium should be checked to look for electrolyte imbalances.

A urinalysis can be helpful to look for leukocytes, leukocyte esterase and nitrite, and a follow up urine culture should be sent if there’s evidence of a UTI.

Also glucose and ketones in the urine tell us about hyperglycemia and diabetic ketoacidosis.

If sepsis is suspected, then a septic workup should be done, which includes cultures of the urine and blood, and a chest x-ray to look for pneumonia.

A urine, blood or sweat toxic screen for drug overdose is also helpful when the cause isn’t obvious. Toxic screen identifies commonly overdosed drugs, like alcohol, benzodiazepines, opioids, cocaine, and amphetamines. Now, because of chemical similarities, normal doses of some prescription medications like NSAIDs or antidepressants can cause false positive results on the toxic screen. Also, a true positive could be due to a drug taken weeks to months ago and not necessarily the cause of the acute delirium episode. If the clinical picture supports the diagnosis of a drug overdose or withdrawal, then a reversal agent should be given immediately, such as benzodiazepines for alcohol withdrawal, flumazenil for benzodiazepine overdose, or naloxone for opioid overdose. However, some toxic screens don’t identify for some medications that can cause delirium. So the history should include asking about medications with anticholinergic properties, such as atropine, anti-histamines, and tricyclic antidepressants.

Occasionally, the use of multiple medications concurrently can cause delirium, potentially by interacting with each other. This is called polypharmacy, and is especially prevalent in elderly individuals. Acutely, it’s best to stop all unnecessary medications until the individual recovers.

To prevent polypharmacy, medications that are doing more harm than good should be identified and discontinued.

The ECG can help in identifying arrhythmias associated with systemic conditions, like atrial fibrillation in thyrotoxicosis, a prolonged QT interval in hypocalcemia, or a widened QRS complex in tricyclic antidepressant overdose.

Additionally, it can help diagnose silent myocardial infarctions which sometimes can present with an altered mental status, especially in the elderly, females, and individuals with diabetes.

A blood gas should also be obtained because it can offer clues. For example, respiratory alkalosis may occur in early sepsis, a cardiopulmonary cause of hypoxia like heart failure or pneumonia, or early aspirin overdose.