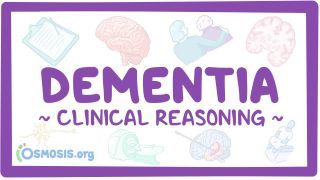 The brain is responsible for various mental functions, including memory, language, visuospatial function, concentration, executive function, praxis, which is the ability to carry out complex motor activities, and personality.

A subtle decline in cognitive function like a slowed reaction time, is a common part of normal aging, and usually doesn’t impair daily functioning and independence - this is called mild cognitive impairment, and it can be a precursor for dementia.

On the other hand, if there’s a decline in at least one cognitive skill that does impair daily functioning and independence, then it’s called dementia.

The major risk factor for most forms of dementia is advancing age, but dementia is not considered an inevitable consequence of normal aging.

Most of the time, in dementia, a close family member or friend notices the individual’s change in cognition.

This includes impaired memory, which leads to repeating conversations or misplacing belongings.

Language impairment can make it hard to think of common words.

Additionally, concentration and executive function are impaired, so individuals have a hard time with complex tasks, like managing their finances.

Impairment in praxis leads to an inability to perform complex motor tasks, such as buttoning one’s shirt.

Visuospatial impairment can lead to an inability with recognizing familiar faces or using simple instruments like utensils.

Sometimes, family members notice a change in the individual’s personality.

For more information, the Montreal cognitive assessment or MOCA or the mini-mental status examination, or MMSE, can be done to assess orientation, registration, recall, attention, and language.

For example, orientation is assessed by asking individual what time it is, where they are, or who the president is.

Registration is assessed telling the individual three words - like dog, table, and cake, and then asking them to repeat it immediately. Then, they’re asked to repeat those three names five minutes later, which assesses recall.

Attention can be assessed by asking the individual to spell a word backwards.

The MMSE totals to 30 points, and a score of less than 24 implies cognitive impairment, which may suggest dementia or delirium, which can be differentiated by the time course and the clinical context.

Delirium is usually acute in onset, lasts only a couple of hours to days, and the cognitive symptoms fluctuate - meaning they come and go.

On the other hand, dementia is usually gradual in onset, lasts months to years, and the cognitive symptoms are usually progress over time.

Also consciousness and awareness are always impaired in delirium. However, they are only impaired in the later stages of dementia.

Additionally, delirium always occurs as a direct physiological consequence of in the event of an acute insult, such as an infection, electrolyte imbalance, change in medication or intoxication or due to a psychiatric condition, like schizophrenia or major depression.

Okay, now dementia can result from reversible and irreversible causes.

Some reversible causes include alcohol dependence and various medical conditions which can be identified with laboratory investigations.

It’s helpful to send off TSH levels for hypothyroidism, vitamin B12 levels to assess for a deficiency, and a rapid plasma reagin test, or RPR for syphilis.

Another reversible cause is normal pressure hydrocephalus or NPH which is caused by abnormal venous drainage of the cerebrospinal fluid, resulting in a backup of fluid and hydrocephalus.

Individuals with NPH usually present with a triad of symptoms - dementia, urinary incontinence, and gait disturbance that’s described as a “magnetic gait”, because it seems like the person’s feet are glued to the ground.

A brain MRI shows ventriculomegaly of all the ventricles, a patent cerebral aqueduct, and no signs of cortical atrophy.

As suggested from the name, a lumbar puncture will show a normal opening pressure.

The good news is that reversible causes can be treated, and when that happens, the dementia symptoms go away.

Alcohol dependence can be treated with medications like acamprosate, disulfiram, and naltrexone.

The treatment for NPH is placing a ventriculoperitoneal shunt, which drains the excess cerebrospinal fluid.

However, although placement of a ventriculoperitoneal shunt helps improve walking, it does not help improve cognition.

Now, let’s explore the irreversible causes. Alzheimer's disease is by far the most common cause of dementia, and it has an insidious onset and gradual progression.

First is the asymptomatic phase - which presents brain changes like accumulations of a protein called tau that collect inside neurons but no clinical symptoms.

The third phase is the dementia phase, and that’s where individuals develop more significant memory loss, followed by slow, gradual loss of the other cognitive functions, such as language, visuospatial, and executive functions.

Later on both episodic and semantic memory get impaired.

Episodic memory can be subclassified into immediate, recent, or long term.

Immediate memory is sometimes called procedural memory, and it’s the memory that you use to repeat back a phone number right away.

Recent memory is the the memory you use to remember a list three words five minutes later - like those 3 words from earlier. This is the type of memory that’s impaired early on in Alzheimer's disease because the disease affects the hippocampus first, which is responsible for recent memory.

Long-term memory is the memory of events that have occured years ago, and these are not impaired until late in the course of this disease. For example, an individual with Alzheimer's may remember the details of their wedding 50 years ago, but they won’t be able to remember where they were yesterday.

The presumptive diagnosis of Alzheimer's disease is made clinically and investigations are done to exclude other causes of dementia.

Also, in Alzheimer's disease a brain CT or MRI can show hippocampal atrophy that can progress to diffuse cortical atrophy.

A brain biopsy is the only investigation that would definitively diagnose Alzheimer's disease, but that’s invasive and isn’t usually done until there’s an autopsy after death.

It’s thought that lower acetylcholine levels may contribute to the cognitive symptoms seen in Alzheimer's disease.

So, cholinesterase inhibitors like donepezil, rivastigmine and galantamine can be used for treatment since they increase cholinergic transmission at the synaptic cleft.

In individuals that can’t tolerate cholinesterase inhibitors, NMDA-receptor antagonists, like memantine can be used. These medications don’t slow the progression of the disease, but they do help mitigate some of the cognitive and behavioral symptoms like forgetting family members or personal info, making day-to-day life relatively easier for affected individuals.

Finally, depression is common in all types of dementia but especially in Alzheimer's disease, and selective-serotonin reuptake inhibitors, or SSRIs, are an effective treatment option for behavioral symptoms, although they don’t improve cognition.

Next up is vascular dementia, where cognitive deficits are associated with cerebrovascular disease.

Individuals typically have manifestations of atherosclerosis like hypertension, diabetes, and coronary artery disease. Additionally, they can show signs of brain damage like symptoms like urinary incontinence, cranial nerve palsy, and focal neurological deficits.

One type of vascular dementia is multi-infarct dementia, which results from multiple strokes and causes a stepwise decline in cognitive function.

For example, the individual develops a stroke, and as a consequence demonstrates a sudden decline in their memory. Then, in between stroke events, there is no progression of their cognitive dysfunction, until another stroke occurs, and they suddenly lose another cognitive domain such as language, and so on.

This pattern, alongside a temporal relation to the stroke, is what differentiates it from Alzheimer's disease, in which the decline in cognitive function is steady and gradual.

Also, unlike in Alzheimer's disease where recent memory is usually lost first, the pattern of cognitive decline in vascular dementia varies depending on which area was infarcted.

Another type of vascular dementia that diffusely affects the white matter of the brain is called Binswanger disease, and this is usually characterized by a slowly progressive dementia.

Unfortunately, there is no available treatment that can help reverse vascular dementia.

Instead, treatment mainly focuses on preventing another stroke from happening. This includes blood pressure, diabetes and cholesterol control, lifestyle modification; such as exercise, dietary changes, and smoking cessation, as well as starting antiplatelet agents like aspirin.

In vascular dementia, the evidence is mixed for the cholinesterase inhibitors, but they are often prescribed because of the frequent co-occurrence of cerebrovascular and neurodegenerative disease.

“Fronto-temporal” refers to atrophy of the frontal and temporal lobes, with relative sparing of the other lobes.