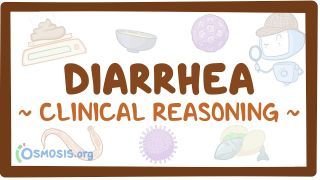 Diarrhea is defined as having more than 3 liquidy stools in 24 hours or having a stool weight of over 200 grams per day, but nobody measures stool weight since that can get messy - especially if you’re having diarrhea!

Diarrhea can also be classified as either inflammatory or non-inflammatory.

Inflammatory diarrhea causes inflammation of the gastrointestinal epithelium and this usually happens with invasive pathogens or as a result of a chronic inflammatory bowel disease, and usually there are systemic symptoms like fever.

In contrast, non-inflammatory diarrhea can be either secretory or osmotic, and neither one usually causes systemic symptoms like fever.

With osmotic diarrhea, some of the ingested nutrients aren’t fully absorbed, and they remain in the intestinal lumen and pull in water through the process of osmosis!

Now, most cases of acute diarrhea are caused by pathogens, mostly viruses, but also bacteria, protozoa, and parasites that mostly spread through fecal-oral transmission.

The minority of cases of acute diarrhea are due to non-infectious causes like stress, medications, or a toxic ingestion.

Most people with acute diarrhea don’t need to come to the hospital, because symptoms aren’t severe and resolve within 2 weeks. But in terms of figuring out the cause, it’s helpful to ask the right questions - like playing Sherlock Holmes.

With infectious organisms, diarrhea is non-inflammatory and secretory, stools are watery and usually associated with vomiting and this is mostly caused by viruses, such as norovirus and rotavirus.

In contrast, when there’s inflammatory diarrhea, the stools are bloody and mucousy - called dysentery- and other symptoms include severe abdominal pain and fever. This is mostly caused by invasive pathogens like Salmonella, Shigella, Yersinia, Campylobacter, and enteroinvasive E. coli - and these are sometimes shortened to SSYCE.

More specifically, exposure to contaminated foods - particularly animal products like meat, dairy, and eggs has been associated with Salmonella infection, and drinking contaminated water can lead to a Giardia infection.

If there was any recent antibiotic use, Clostridium difficile may be the culprit because it can cause pseudomembranous colitis.

On the physical examination, the most important thing is to assess the degree of dehydration, and based on the volume lost through stools and/or vomiting, dehydration can be mild, moderate and severe.

Mild dehydration means that 5% of the total weight was lost and the individual may only be thirsty.

Moderate dehydration means that 6 to 9% of the total weight was lost and in this case the individual may have dry mucous membranes, sunken eyes, decreased urine output, tachypnea, and tachycardia.

Finally, in severe dehydration, more than 10% of the body weight is lost and the individual might have very dry mucous membranes, decreased skin turgor, cool limbs, anuria, significant tachypnea and tachycardia, and in extreme cases hypotension and a loss of consciousness.

Laboratory tests are not usually done in individuals with acute diarrhea, but in severe cases where there are signs of moderate or severe dehydration - electrolytes, creatinine and urea nitrogen should be taken in order to rule out renal dysfunction.

In some cases, a CBC can also be helpful. For example, thrombocytopenia and anemia is suggestive for hemolytic-uremic syndrome which is often caused by E. coli O157 which produces Shiga toxin. Another example, is that there can be a very elevated white blood cell count in Clostridium difficile infections.

Finally, for individuals that are ill appearing, or in vulnerable populations like the elderly or with comorbid conditions, or in fields that could cause a public health concern - like daycare workers, a more thorough workup should be considered. That includes blood cultures, fecal leukocytes or fecal lactoferin which helps differentiate inflammatory from non-inflammatory diarrhea, stool cultures for SSYCE, C.diff toxin assays, enterohemorrhagic E.coli Shiga toxin, and Entamoeba histolytica testing which is done by sending three stool specimens that are collected on consecutive days, because ova and parasite excretion can be intermittent. It’s also worth sending off testing for common viruses like norovirus and rotavirus to make sure that it isn’t a severe viral gastroenteritis.

Treatment of acute infectious diarrhea is mainly about fluid repletion and dietary adjustments.

Fluid repletion should be primarily done using oral rehydration solutions that are taken orally or with a nasogastric tube, and in severe cases like individuals with severe hypovolemia should be given intravenous fluids. One to two liters of isotonic crystalloids are given initially to restore tissue perfusion and this is continued until the individual is euvolemic.

Typically the diet should be focused on liquids and simple foods like juices, soups, bread, and crackers. In addition, dairy products like milk and cheese should be avoided for a few months, because acute infectious diarrhea often causes secondary lactose malabsorption. Live culture yogurt is an exception because it contains live active bacteria that help break down and digest the lactose in milk.

Empiric antibiotic treatment is given for individuals who are severely ill or have risk factors for complications or if the onset of symptoms was travel-associated. Some common regimens are azithromycin 500mg once daily for three days or fluoroquinolones such as ciprofloxacin 500 mg twice daily for 3 to 5 days.

If a specific pathogen is identified then it can be treated according to the antibiotic that it is most susceptible to. But some bacteria, like enterohemorrhagic E. coli shouldn’t be treated with antibiotics because the use of antibiotics increases the toxicity of E. coli’s Shiga toxin.

In persistent diarrhea, the causes differ a bit, and parasitic organisms like Giardia, Cryptosporidium, and Entamoeba histolytica, are more common - especially in individuals who travel or who work in a daycare facility.

Giardia and Cryptosporidium cause non-inflammatory secretory diarrhea associated with abdominal pain, whereas Entamoeba histolytica causes inflammatory diarrhea with bloody stools, severe abdominal pain, and fever. In this situation, three ova and parasite samples are sent for testing, and stool antigen testing may also be used to diagnose specific parasitic infections.

Finally, there’s chronic diarrhea, and the causes vary a bit based on the socio-economic status of the population.