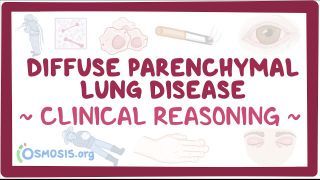 Diffuse parenchymal lung diseases, or DPLDs are a group of rare lung disorders that affect the interstitium of the alveolar wall, the alveoli, as well as the blood vessels and pleura of the lungs.

Previously, they were called interstitial lung diseases because we thought that they only affected the interstitium.

Now, there are literally hundreds of DPLDs out there, so it’s more important to know how to classify them based on their key features than to memorize the names of an ever-growing list of diseases.

DPLDs that have a known cause can be subclassified into connective tissue diseases, like systemic lupus erythematosus, rheumatoid arthritis, or systemic sclerosis; occupational exposures, like asbestosis, silicosis and berylliosis; granulomatous diseases, like sarcoidosis and hypersensitivity pneumonitis; and treatment-induced causes, like the antiarrhythmic amiodarone, the antibiotic nitrafurantoin, the chemotherapeutic agents methotrexate, bleomycin and busulfan, as well as exposure to radiation.

Now, idiopathic DPLDs include many subtypes, but the most important one is idiopathic pulmonary fibrosis.

In all scenarios, tobacco smoking can potentially worsen an existing DPLD.

Now, DPLDs are classified this way because the known causes are often more treatable and relatively reversible compared to the idiopathic causes.

Consequently, when approaching a individual, it’s crucial to first think through the known causes.

Additionally, it’s important to understand that DPLDs are rare, and that other causes of respiratory symptoms like pneumonia and heart failure should be considered.

Alright, now regardless of the cause, DPLDs share similar clinical, radiographic and pathological manifestations, which is why all these diseases are clumped under the DPLD umbrella.

Individuals with DPLD commonly present with shortness of breath that worsens with exertion and a dry cough over the course of months to years. But these are still broad symptom categories - so thinking through other clues can help.

Think of connective tissue diseases if there’s a woman in her 30s.

A history of occupational exposure may also clue to an occupational lung disease, such as asbestosis in a shipbuilder, berylliosis in an aerospace engineer, silicosis in a sandblaster, or hypersensitivity pneumonitis in a farmer exposed to bird droppings.

On examination, crackles may be heard on auscultation, and clubbing of the fingers may occur due to chronic hypoxia.

A loud pulmonary component of the S2 heart sound may be heard, and this could indicate pulmonary hypertension which can occur secondary to chronic hypoxia.

Blue discoloration of the skin and enlargement of the thyroid gland may indicate long-standing amiodarone use.

Swelling of the parotid gland, facial palsy, uveitis or conjunctivitis, restrictive cardiomyopathy or heart block, and erythema nodosum are all extrapulmonary features of sarcoidosis.

Violaceous discoloration around the eyelids called a heliotrope rash and purplish papules on the knuckles called Gottron’s papules indicate dermatomyositis, while a red malar rash across the nasal bridge suggests lupus.

Alright, after a chest x-ray, the next step is a high resolution computed tomography or HRCT scan.

The HRCT gives more anatomical detail than the plain x-ray, and may show specific manifestations. For example, bilateral hilar adenopathy may indicate sarcoidosis.

In idiopathic pulmonary fibrosis, the alveolar walls become so thick that the lung parenchyma gives the appearance of a honeycomb.

Pleural effusions may be seen in connective tissue diseases.

Also, a linear pleural plaque, which is a thick, white elevation of the pleura that may be calcified, points towards asbestosis.

Alright, now pulmonary function tests always show a restrictive pattern in DPLDs and this helps distinguish the disease from an obstructive disease like COPD or asthma.

In DPLDs, the FVC decreases, however, because there’s no airway obstruction, the FEV1 doesn’t decrease as much. So, the ratio of FEV1 to FVC will be normal or even high.

Also, because the lung is stiff, the lungs don’t expand properly, so the total lung capacity, or TLC and the residual volume, or RV are decreased.

Finally, because the alveoli are affected, gas exchange is impaired. Gas exchange can be tested by measuring the DLCO which involves allowing the individual to inhale a small amount of carbon monoxide and seeing how well it diffuses.

In DPLDs, the DLCO is decreased.