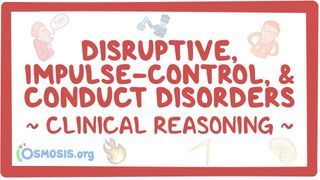 From time to time, everyone has moments when they behave poorly, but those with disruptive, impulse-control, and conduct disorders repeatedly have trouble controlling their behavior, and often end up destroying things or hurting those around them.

For example, they might get irritated and then end up punching their fist through a door.

There are various biological, psychological, and environmental factors that contribute to disruptive, impulse-control, and conduct disorders.

Biological factors, include having a family history.

In addition, having abnormalities in the prefrontal cortex and amygdala are specifically linked to intermittent explosive disorder.

Psychological factors include having a difficult temperament like being withdrawn and unable to adapt to new situations, and having difficulty with delayed gratification.

All of the disorders are marked by difficulty controlling emotions and behaviors, leading to destruction of property or hurting others as well as troubles with authority.

Individuals are usually unable to restrain their impulses and their responses are typically out of proportion to the provocation, and cause high levels of psychosocial impairment.

A person may feel increasing tension like feeling a tightening in their muscles, and a compulsion to act on their destructive or explosive impulses, as well as a sense of pleasure and release after they’ve done so.

The most studied condition is intermittent explosive disorder.

First, diagnosis requires recurrent outbursts due to a failure in controlling aggressive impulses.

The outbursts are defined by one of two situations. The first situation is verbal aggression such as temper tantrums and arguments or physical aggression toward property, animals, or other people, that happens roughly twice a week, for at least 3 months.

Here, the physical aggression doesn’t necessarily have to cause property destruction or physical injury.

The second situation consists of at least three outbursts that involve property destruction or physical assault resulting in injury to animals or people, over a 12 month period.

Second, the aggressiveness expressed during the outbursts must be disproportionate to the triggers.

Third, the outbursts should not be premeditated with an ulterior motive like money or intimidation.

Finally, they should cause either distress or impairment in daily life or they should be associated with financial or legal consequences.

The individual must be at least six years old, and for individuals between 6 to 18 years, aggressive behavior that due to an adjustment disorder should not be considered towards this diagnosis.

First, individuals should have at least four symptoms for at least 6 months, from any of the following three categories, angry or irritable mood; argumentative or defiant behavior; and vindictiveness.

Second, these behaviors must cause distress for the individual or for their family, friends, and colleagues, or it must negatively impact their daily functioning.

Finally, the behaviors should not occur exclusively during a psychotic, substance use, depressive, or bipolar disorder.

The first criterion is behavior that break major societal norms or rules.

This is shown by at least three of the following 15 criteria which are grouped into four categories, occurring in the past 12 months, with at least one present in the past 6 months.

Let’s go through the criteria. First, individuals bully, threaten or intimidate others.

Second, they initiate physical fights, and third, they use weapons that can cause physical harm such as bats and knives.

Sixth, individuals have stolen while confronting a victim like mugging or purse snatching.

Seventh, they have forced someone into sexual activity.

Now eight is when individuals deliberately set fires to cause serious damage, and ninth when they deliberately destroy others’ property other than by fire.

Ten, individuals have broken into someone else’s house, building, or car.

Eleven, they often lie to obtain goods, favors or to avoid obligations.

Twelfth, they have stolen important or valuable items without confronting a victim such as shoplifting.

Criteria thirteen is when individuals sneak out at night without parental consent, beginning before age 13 years.

Fourteenth, they ran away from home overnight at least twice while living home, or once without returning for a long time.

And finally, at fifteen, individuals are often cutting school, before the age of 13 years.

If the individual is 18 or older, criteria are not met for antisocial personality disorder, for which conduct disorder is thought to be a precursor. The disturbance in behavior should cause significant impairment in functioning.

Fourth, pyromania is a condition diagnosed when individuals set fires on purpose and on more than one occasion.

Second, they feel things like tension or a sense of arousal like excitement or joy before the act.

Third, they’re fascinated with, interested in, curious about, or attracted to fire in various situations.

Fourth, they feel pleasure, gratification, or relief when setting fires or watching the aftermath of a fire.

For example, an individual might set a forest on fire and feel excitement while watching people try to put it out.