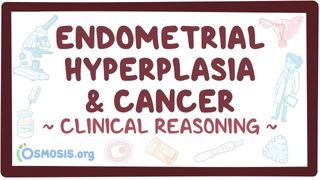 Transcript for Endometrial hyperplasia and cancer

Endometrial cancer or endometrial carcinoma is when cancer cells arise in the glands within the lining of the uterus.

Initially the abnormal growth is called endometrial hyperplasia, a precancerous lesion that can eventually progress to endometrial cancer.

Now, the main cause of endometrial hyperplasia and cancer is excess estrogen - either endogenous or exogenous.

In fact, estrogen has a cumulative effect throughout a female’s lifetime - so risk factors include early menarche or late menopause, both of which increase the number of ovulatory cycles, each of which contributes to a spike in estrogen.

Females who have never been pregnant are also at risk - because they don’t have a pause in their menstrual cycles.

Another risk factor is chronic anovulation, like with polycystic ovarian syndrome. That’s because the ovarian follicles keep secreting estrogen, and there’s no luteal phase progesterone to counteract its effects on the endometrium.

Finally, there’s Lynch syndrome, an autosomal dominant disorder which causes non-polypoid tumors to sprout in the colon, and also increases the risk of endometrial cancer.

Endometrial cancer can cause different symptoms based on age and reproductive status.

In premenopausal females below 45 years old, there might be abnormal vaginal bleeding or anovulation.

In females between the age of 45 and the onset of menopause, there might be intermenstrual bleeding, menstrual cycles shorter than 21 days, and heavy periods that last over 7 days.

Finally, in postmenopausal females, any vaginal bleeding should prompt an endometrial evaluation.

Alternatively, an endometrial evaluation may be prompted by an abnormal finding on a pap smear.

An endometrial evaluation starts with a pelvic exam.

In postmenopausal females with vaginal atrophy, a speculum examination may show vaginal lacerations as the source of bleeding.

Next, a bimanual examination is done, which may detect a pelvic mass, or a fixed, enlarged uterus - especially when the cancer is advanced.

Females of reproductive age, should have a urine pregnancy test to rule out pregnancy as a possible cause of abnormal bleeding.

If the endometrium is thicker than 4 millimeters in a postmenopausal female, then an endometrial biopsy is done.

In premenopausal females with risk factors for endometrial cancer, an endometrial biopsy should be obtained regardless of endometrial thickness on ultrasound.

There’s two ways to get an endometrial biopsy.

The first is called endometrial sampling, which is when a very thin flexible tube is inserted through the cervix and into the uterus.

Then, using suction, a small amount of endometrium is removed through the tube. This can be done with local anesthesia.

The second procedure is called dilation and curettage, which is when the cervix is first dilated with a slender rod, or with medication like prostaglandins, and then the uterine lining is scraped with a long, spoon-shaped instrument called a curette.

This procedure can also be used therapeutically, so it’s usually the first choice in females who are bleeding heavily.

Additionally, it’s the first choice for those individuals who have a very high risk of endometrial cancer - like females with Lynch syndrome, for example.

A benefit of dilation and curettage is that it can be performed in conjunction with a hysteroscopy.

In a hysteroscopy a tiny telescope is passed through the cervix and into the uterus, to visualize the uterine cavity. Any suspicious-looking lesions can then be biopsied.

Under a microscope, normal endometrial tissue has uterine glands dispersed throughout.

The uterine glands are ovoid or circular in shape, with lots of stroma between them.

Additionally, within the cells that line the uterine glands, the nuclei are located towards the base of the cell, roughly at the same level.

Finally, the cells all stain similarly.

Now, there are two types of endometrial hyperplasia, simple or complex.

With simple endometrial hyperplasia, there are slightly more uterine glands than normal, and each one has more cells lining the lumen of the gland.

With complex endometrial hyperplasia, there are many more uterine glands.

Also, the glands are tortuous, giving them a “branching” appearance.

Nuclear atypia means that the nuclei are all in disarray, not parallel to the lumen anymore, and the cells can also stain differently - some cells appear darker purple than others.

Treatment depends on the presence of nuclear atypia, as well as the female’s age and desire to carry children.

So, when there’s no nuclear atypia, the risk of either simple or complex endometrial hyperplasia progressing to endometrial cancer is very low, so typically progestin is used to revert the effects of estrogen.

In premenopausal females, the first line option is a levonorgestrel-releasing intrauterine device.

However, this is also a contraceptive device - so in females who wish to get pregnant, the alternative is 10 to 20 milligrams of medroxyprogesterone acetate daily, for 6 months. After that, treatment is stopped for 2 to 6 weeks, and another endometrial biopsy is obtained.