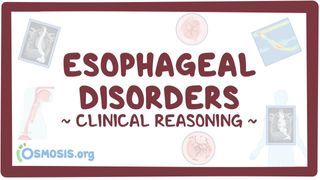 The esophagus is a 25- 30 centimeter long tube through which food and liquids pass from the pharynx to the stomach.

The esophageal wall is composed of 4 layers: inner mucosa which is made of stratified squamous epithelium except at the lower esophageal sphincter where it joins the gastric epithelium to form the gastroesophageal junction, submucosa, a muscular layer made of skeletal muscle in the upper third, smooth muscle in the lower third and a combination of the two in the middle and finally an outer layer of connective tissue called adventitia.

At the top and bottom of the esophagus there are the upper and lower esophageal sphincter, respectively. Both relax during swallowing to allow the passing of food or liquids propelled by peristaltic contractions.

With esophageal dysphagia, it’s important to know what type of food produces the symptoms: if dysphagia is related to the ingestion of both liquids and solids, the most probable cause is a functional disorder.

On the other hand, dysphagia for solids only means that the lumen of the esophagus is really narrow, often less than 13 millimeters due to a mechanical cause like a malignancy or esophageal stricture.

Dysphagia can also be intermittent or progressive.

Usually, intermittent dysphagia is related to both solids and liquids and appears in functional disorders, whereas progressive dysphagia means that something is growing inside the esophagus and dysphagia gradually worsens.

With esophageal dysphagia, the individual can easily initiate a swallow, but after a few seconds will feel a lump in the throat, whereas with oropharyngeal dysphagia the individual has difficulty in initiating a swallow most commonly due to nerve and muscle damage in the upper sphincter of the esophagus or pharynx.

In some situations, there can be retrosternal chest pain, and in that situation it’s important to do an electrocardiogram to rule out cardiac ischemia.

A Barium swallow is a non-invasive, x-ray of the esophagus, stomach, and duodenum using orally ingested barium as contrast.

Upper endoscopy is a minimally invasive procedure that helps visualize the esophagus, stomach and duodenum through a flexible tube with a camera inserted in the mouth.

Upper endoscopy should generally be performed in individuals that present dysphagia in order to rule out esophageal cancer.

Esophageal manometry is used to diagnose functional disorders. The way that it’s done is a sensitive pressure catheter is inserted through the nose and sent down into the esophagus so it can measure the strength of peristaltic contractions, as well as the pressure in both esophageal sphincters during swallows.

There are actually two types of esophageal manometry. In Classical manometry there are 4 to 8 pressure sensors placed at different levels of the esophagus and a normal reading looks something like this.

In high resolution manometry there are more pressure sensors and the reading is color coded and looks like a surface map, where red indicates the strongest contractions, and blue indicates the weakest contraction, so that it looks something like this.

Now, let’s go over the functional disorders of the esophagus.

With achalasia, esophageal peristalsis is impaired and food isn’t effectively propelled through the esophageal body.

In addition, the lower esophageal sphincter doesn’t completely relax during swallowing, so it doesn’t allow food to pass through, leading to dilation of the esophagus.

Individuals typically have progressive dysphagia for both solids and liquids, regurgitation of undigested food, chest pain, heartburn, and weight loss.

On a Barium swallow the esophagus looks dilated and has a narrow lower sphincter classically called a “bird’s beak” appearance.

An upper endoscopy doesn’t diagnose achalasia, but it should be done in individuals with dysphagia and weight loss to rule out an esophageal cancer.

High resolution manometry is the gold standard for diagnosing achalasia and it can show absent peristalsis in the esophageal body and high pressure in the lower esophageal sphincter.

There isn’t a cure for achalasia, but there are options for relieving the symptoms and reducing the pressure of the lower sphincter. The most effective option is a Heller laparoscopic myotomy.

That’s where a small cut is made in the lower sphincter to relieve the pressure and sometimes it’s accompanied by Nissen’s fundoplication surgery to prevent acid reflux and this can work for more than 10 years.

Individuals above the age of 40 are considered high risk for a myotomy, so they’re usually treated with a pneumatic dilation instead. That’s where a balloon is inserted through an endoscope in the lower sphincter and filled with air for 40 to 50 seconds to stretch out the muscle layer of the lower sphincter. That typically works for up to 10 years.

Individuals older than 65 years are poor candidates for these surgeries, so they are often treated with a botulinum toxin that’s injected directly into the lower esophageal sphincter through an endoscope. That typically works for up to a year.

Medical therapy is a generally ineffective treatment for achalasia, but it can be used in poor surgical candidates if botulinum toxin injections didn’t work. Options include calcium channel blockers such as nifedipine and sublingual nitrates which decrease pressure in the lower esophageal sphincter.

Individuals often have retrosternal chest pain due to high-amplitude contractions and intermittent dysphagia for both solids and liquids but rarely have food regurgitation.

On a barium swallow, the esophagus will have a “corkscrew” or “rosary bead” appearance.

Treatment is very similar to achalasia, but in this case, medical therapy with calcium channel blockers and sublingual nitrates are first line treatment because they’re more effective.

Pneumatic dilation and botulinum injection therapy can be used in severe situations, but just like in achalasia, they’re only short term measures.

With esophageal scleroderma, the smooth muscle in the esophagus begins to atrophy and as a result, the peristaltic contraction in the mid and distal esophagus are absent. In addition, the lower esophageal sphincter pressure is lower than normal, and that leads to gastroesophageal reflux disease.

Scleroderma or systemic sclerosis is an autoimmune disease in which there’s fibrosis of the skin and the digestive system - particularly affecting the esophagus, the kidneys, heart, lungs, and muscles.

CREST syndrome is a limited form of the disease and it stands for: calcinosis which is calcium deposits in soft tissues, Raynaud phenomenon, esophageal dysmotility, sclerodactyly which is skin tightening, and telangiectasia or spider veins near the surface of the skin.

Most individuals with esophageal scleroderma have dysphagia, odynophagia, heartburn, and regurgitation.