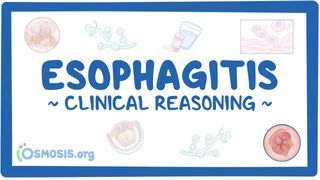 Medical therapy with PPIs can be used to minimize the injury to the esophagus due to acid reflux and a low dose of corticosteroids can be used to reduce inflammation. In fact, fluticasone propionate is sprayed into the mouth and then swallowed and this is often preferable because it reaches the esophagus without getting absorbed into the bloodstream and so it won’t cause side effects typically associated with corticosteroids, like hyperglycemia.