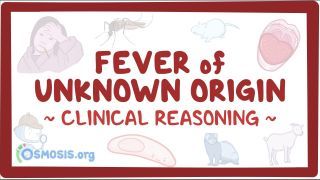 Transcript for Fever of unknown origin

Fever is one of the most common complaints in children.

Now, fever of unknown origin, or FUO, is defined as a temperature higher than 101ºF or 38.3ºC that lasts for at least eight days and has no underlying cause in spite of a formal evaluation.

Okay, so, causes of FUO can be divided into two large categories: infectious and non- infectious.

And those fevers typically resolve within a few days of stopping the medication.

Another cause of FUO is neurologic injury that causes the hypothalamus to dysregulate a child’s temperature.

Managing FUO begins with asking the family to keep a fever diary that records the date and time of fevers, the height of fevers, associated symptoms, and any medications that were given.

Sustained or continuous fevers generally persist throughout the day with less than 1 ºC of variation.

They are usually seen with typhoid fever, or typhus.

Fevers that fluctuate more than 1 ºC throughout the day are called intermittent and remittent fevers.

If the child remains afebrile for more than 24 hours between febrile episodes, the fever pattern is called relapsing or recurrent.

In recurrent fevers, there are afebrile periods of more than 7 days, seen with Periodic Fever Syndromes, Cyclic neutropenia and immunodeficiency states.

Moving from head to toe, there could be a history of conjunctivitis with limbus sparing, which means red eyes with a white margin right around the iris in Kawasaki disease, in which case there’ll also be a rash, which starts polymorphous, but later desquamates, or flakes off; adenopathy, or enlarged lymph nodes, especially concerning the cervical lymph nodes; a strawberry tongue, which is when the top layer of cells on the tongue sloughs off, giving the tongue a very red, strawberry-like appearance; their hands and feet might develop a rash and swell; and finally, five or more days of high fever that doesn’t resolve with antipyretics.

Just remember that these Kawasaki patients C-R-A-S-H and burn.

We should also ask for nasal discharge in case of sinusitis or epistaxis in case of leukemia, oropharyngeal symptoms like pharyngeal hyperemia in case of CMV or EBV infection, recurrent pharyngitis with ulcerations in case of PFAPA syndrome and dental abscesses related to sinusitis.

There might also be lymphadenopathy in case of infectious mononucleosis, cat- scratch disease, tuberculosis or lymphoma, respiratory symptoms like cough in case of bronchitis or pneumonia, gastrointestinal complaints like abdominal pain or loose stools in case of Salmonellosis, an intraabdominal abscess, or inflammatory bowel disease, genitourinary symptoms like flank pain, dysuria, and frequent urination in case of genitourinary tuberculosis or brucellosis and musculoskeletal symptoms, like limb or bone pain in case of leukemia or osteomyelitis.

Another important thing to ask for is specific exposures. These include contact with animals, like birds for Chlamydia psittaci, Cryptosporidium, and Histoplasma capsulatum; household cats or kittens for Bartonella Henselae and Toxoplasma gondii; dogs for Brucella and Pasteurella; farm animals like cows, sheep and goats in case of Brucella; fish, water mammals, oysters or clams for Vibrio parahaemolyticus, Vibrio vulnificus, Legionella, and some Mycobacterium species.

Recent travel to endemic places can also be a clue for malaria, tuberculosis, Lyme disease, as well as fungal diseases, like Histoplasmosis, Blastomycosis and Coccidioidomycosis.

Tick bites are also risk factors for tularemia, Lyme disease, Rickettsia and Babesiosis, while mosquito bites are rιsk for arboviruses infections and malaria.

There’s also often history of consumption of raw meat and unpasteurized milk in case of Brucellosis, or raw shellfish or unwashed vegetables in case of toxoplasmosis.

And then, medical treatments may raise suspicion of drug fever, in case of medication consumption, or intra abdominal abscess especially if there’s a history of abdominal surgery.