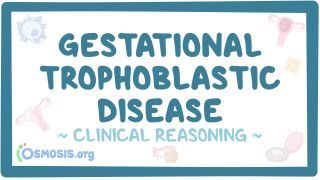 At the benign end of the spectrum, there’s moles - and no, we’re not talking about the cute little brown ones above the upper lip. In this case, moles refer to a molar pregnancy, and they are also called hydatidiform moles.

At the malignant end, there’s invasive moles, which derive from the benign moles, and choriocarcinoma - which is placental cancer that most frequently occurs in the absence of a molar pregnancy.

Risk factors for molar pregnancies include maternal age extremes - like younger than 20, or older than 35, and a previous molar pregnancy.

The difference is that a complete mole appears when a chromosomally empty egg fuses with a normal sperm, and the sperm genetic material duplicates to form a 46 chromosome organism. However, this organism doesn’t have both maternal and paternal chromosomes, so the mole develops into a mass rather than developing into a fetus.

An incomplete mole, on the other hand, appears when a normal egg is fertilized by two sperm - which forms an organism with 69 chromosomes, that usually develops into non-viable fetal parts.

With a complete mole, the placenta secretes a huge amount of HCG. So affected females present with signs of pregnancy, like missed periods, and a positive urine pregnancy test.

Vaginal bleeding is another sign, which may range from light spotting to heavy bleeding, and parts of the mole may even be eliminated, and they look like grapes, or cherry-like clusters.

Additionally, this huge amount of HCG leads to hyperemesis gravidarum, which is extreme nausea and vomiting which can lead to severe dehydration.

Interestingly, HCG has a subunit that’s similar to TSH, FSH, and LH. This causes symptoms of hyperthyroidism - like insomnia, anxiety, tachycardia, and palpitations, as well as the formation of theca lutein cysts on the ovaries, which can cause adnexal mass symptoms like pain or pressure on the affected side.

Finally, since the mole grows much faster than a normal pregnancy would, a physical examination shows a uterus that’s too big for gestational age.

An incomplete mole also secretes more HCG than normal - but not quite as much as a complete mole.

So while missed periods and vaginal bleeding may be present, the uterus is not larger than expected for gestational age, and there aren’t symptoms of HCG hyperstimulation like hyperemesis gravidarum, hyperthyroidism, or ovarian cysts.

Most incomplete moles result in spontaneous abortions during the late first, or early second trimester, and the diagnosis is made based on the examination of uterine evacuation contents.

Ok, now, with both complete and incomplete moles, an HCG level higher than 100,000 milli international units per milliliter is diagnostic of a molar pregnancy.

Sometimes, however, the HCG levels may not reach that threshold and so it can also be diagnosed when a transvaginal ultrasound shows a “snowstorm”, or “swiss cheese” pattern. This is a diffuse echogenic pattern resulting from the presence of abnormal placental villi and blood clots.

With complete moles, theca lutein cysts may be found on one or both ovaries.

With incomplete moles, fetal parts may be visible, and there’s often oligohydramnios.

Both complete and incomplete moles are premalignant conditions that can develop into invasive moles.

Invasive moles tend to metastasize to the lungs, so a chest X-ray should be part of the work-up.

If hyperthyroid symptoms are present, serum TSH will be low and serum free T4 will be high.

So, the mainstay of treatment for both complete and incomplete moles is uterine evacuation - and this is typically done through suction curettage, under anesthesia.

Prophylactic uterotonic medication, like oxytocin, is given along with anesthesia, to prevent hemorrhage after evacuation.

Suction curettage per se involves three main steps - first, the cervix is mechanically dilated, then the uterine contents are suctioned out, and finally curettage is done to scrape any remaining tissue from the uterine walls.

The uterine evacuation contents should always be examined histologically, for a definitive diagnosis.

After uterine evacuation, it’s important to get follow-up serial HCG levels, to ensure that the premalignant cells are all gone.

The typical approach is to measure serum HCG weekly, until it’s undetectable for three consecutive weeks, and then once a month for 6 months. This should be done while the female is on reliable contraception - like the barrier method or oral contraception.

Both these malignant tumors arise from the abnormal proliferation of trophoblast cells.

Also, an invasive mole always follows a molar pregnancy, whereas choriocarcinoma can also develop after a non-molar pregnancy - meaning a normal or ectopic pregnancy, or an abortion done for other reasons.

A persistent, invasive mole is more common after a complete mole - especially when the mole caused the uterus to enlarge, when the serum HCG level was over 100,000 milli international units per milliliter, or when there were theca lutein cysts on the ovaries.

The diagnosis is made when HCG levels plateau, meaning they remain within 10% of the previous result, over a three week period, or when HCG levels increase more than 10% across three values recorded over two weeks, or when there is still detectable serum HCG up to 6 months after evacuation of a molar pregnancy.

Choriocarcinoma accounts for a minority of the cases of gestational trophoblastic neoplasia that follow a molar pregnancy, but the diagnosis is the same - it’s identified when HCG levels plateau or rise.

An ultrasound should be done to rule out pregnancy - even if the female is on reliable contraception.

On ultrasound, an invasive mole looks like one or more poorly defined mass in the uterus with anechoic areas, which invade into the myometrium.

And on Doppler ultrasound, an invasive mole has anechoic areas with high vascular flow.

On ultrasound, choriocarcinoma, on the other hand, looks like a single mass distending the uterus, and it looks heterogeneous because it has areas of necrosis and hemorrhage.

And on Doppler ultrasound, a choriocarcinoma also has high vascular flow.

One unique situation is when a choriocarcinoma develops in the first year after a non-molar pregnancy. In this case, it may be trickier to diagnose, because the serum HCG is not routinely being measured.

So these females often develop symptoms, like abnormal uterine bleeding or unexplained amenorrhea weeks to months after pregnancy.

Secondly, there may be signs of excess HCG production, like hyperthyroidism or ovarian theca lutein cysts.

Third, there may be lower abdominal pain or pressure because of uterine and ovarian enlargement.