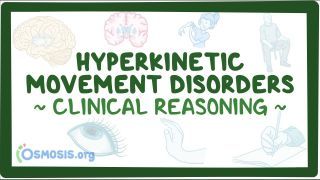 First up is tremor, which is an involuntary, rhythmic movement of a body part, and is the most common of all of the movement disorders.

Tremors can be classified into resting, postural, and action tremors.

Kinetic tremors are simple - if they occur uniformly throughout a voluntary movement - intentional - if it worsens as the affected body part approaches the target - and task-specific - if it occurs during a specific task, like writing.

One very specific type of tremor is called a flapping tremor, or asterixis, and it’s induced when a person fully extends their wrists. In a flapping tremor a person will flap their wrists, like a bird flapping it’s wings. It’s a classic sign of a metabolic disorder, like hepatic encephalopathy in liver disease, uremic encephalopathy in kidney disease, and carbon dioxide retention in lung disease.

A specific and extremely common tremor disorder is essential tremor. It’s thought to be inherited in an autosomal dominant way, although there can be incomplete penetrance, meaning that some affected individuals may not develop all of the features.

Individuals with essential tremor usually develop a unilateral or bilateral postural and kinetic tremor in their arms, face, and head - including the vocal cords - leading to problems with speaking. The tremor is often worsened by caffeine, emotional distress, and hunger.

Interestingly, individuals with essential tremor often self-medicate with alcohol, which can relieve the tremor.

The mainstay of treatment is a beta-blocker like propranolol. An alternative option is primidone if propranolol cannot be given, like in chronic obstructive pulmonary disease or asthma.

Dystonias can be classified into focal dystonias, involving only a specific muscle group or generalized dystonias, which involve multiple muscle groups.

Examples of focal dystonias include blepharospasm, which is a spasm of the eyelid muscles, causes an increased frequency of blinking. Another example is a cervical dystonia involving the sternocleidomastoid muscle and causing the neck to deviate to one side, and causing torticollis.

Limb dystonias are often brought on by specific tasks, for example writing can cause a “writer’s cramp”, or golfing can cause what’s called “the yips”.

Medications that may be used include muscle relaxants like baclofen, levodopa, or anticholinergics.

In some situations, injection of botulinum toxin can help relieve a dystonia.

An important anaesthesia consideration, is that individuals with a history of dystonias can sometimes develop persistent vocal cord spasm that can lead to airway obstruction, especially during stressful situations like surgery.

In Huntington disease there’s a phenomenon called anticipation, which is where there’s an increased number of trinucleotide repeats in subsequent generations. This leads to an earlier onset and more severe presentation of the disease. Individuals often have chorea followed by cognitive symptoms, like dementia, and psychiatric symptoms like depression or psychosis.

Diagnosis is confirmed using polymerase chain reaction of the HD gene, which shows the CAG repeats.

MRI imaging of the brain characteristically shows atrophy of the caudate and putamen, and enlargement of the lateral ventricles.

There are no current medications for Huntington’s disease, but there are clinical trials looking at the use of antisense oligonucleotides which can bind to huntington messenger RNA, as a potential treatment.

However, symptomatic treatment can be provided by giving muscle relaxants like tetrabenazine for the chorea, cholinesterase inhibitors like donepezil for the dementia, antidepressants for depression, and antipsychotics for psychosis.

Chorea is also a feature of other diseases like acute rheumatic fever and lupus. It can also occur in metabolic conditions like thyrotoxicosis or acute hyperglycemia, or even in pregnancy, in which it would be called chorea gravidarum.

Finally, a severe form of chorea is called hemiballismus. That’s where there are wild, flinging movements of a limb on one side of the body, due to a lesion in the contralateral subthalamic nucleus in the basal ganglia.

A myoclonus is an involuntary, brief, rapid, shocklike, jerky movement. A good example of a myoclonus is that of the diaphragm, which we would call a hiccup. Similar to dystonias, myoclonus can be generalized or focal.

Important diseases associated with myoclonus include the Creutzfeldt-Jakob disease, which is a prion-borne illness that results in rapidly progressive dementia and myoclonus.

There’s also opsoclonus-myoclonus syndrome, which is when there’s rapid, erratic, dancing eye movements along with limb myoclonus, and is often also associated with ataxia. This is classically a paraneoplastic syndrome associated with neuroblastoma which can develop in children.

Myoclonus can also be a feature of juvenile myoclonic epilepsy, which is a seizure disorder that affects adolescents.