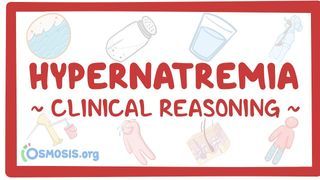 With hypernatremia, there’s a higher than normal concentration of sodium in the blood - above 145 milliequivalents per liter.

However, since the concentration of sodium depends on both sodium and water levels in the body, hypernatremia actually translates as too little water in the extracellular compartment.

Now, both the intracellular and extracellular compartments have the same amount of solutes dissolved in that water - so the same osmolality, normally between 275 and 290 milliosmoles per kilogram.

Serum osmolality can be calculated using the formula: twice the concentration of sodium measured in milliequivalents per liter, plus the serum concentration of glucose divided by 18, measured in milligrams per deciliter, plus BUN, which stands for blood urea nitrogen, divided by 2.8, also in milligrams per deciliter - so if you remember one thing from this formula, it should be that sodium is the major determinant of serum osmolality.

Ok, now just to make matters more interesting, some of these solutes, like sodium and glucose, can’t freely cross cell membranes, so they generate an osmotic pressure inside the compartment, which is a measurement of how likely it is that this compartment will draw water out of the other one.

Normally, the intracellular and extracellular compartments are isotonic to each other - meaning, they have the same concentration of osmotically active solutes.

However, small variations in solute concentrations, like having more sodium in the extracellular compartment, can alter that equilibrium, so water moves across cell membranes in order to restore the balance.

Alright then! So with hypernatremia, there is too much sodium in the extracellular fluid. This can happen because a person has gained more sodium than water, or has lost more water than sodium.

Sodium gain usually happens because of an iatrogenic overload, like in individuals who received hypertonic saline following a traumatic head injury, or sodium bicarbonate solutions used for the treatment of metabolic acidosis.

The other possibility is salt poisoning - which is a rare scenario, but if it is seen, it’s typically in infants and young children who have been abused.

Unreplaced water losses, on the other hand, are the most common clinical situation, and there are 3 possible sources: skin, gastrointestinal, and urinary losses.

Increased insensible water losses can occur in individuals with extensive burns will lose a lot more water through transdermal diffusion.

In both cases, hypernatremia can occur if the lost water is not replaced.

Then we have the gastrointestinal losses - like vomiting, or diarrhea - which can also result in hypernatremia if not enough water is administered.

Finally, too much water can be lost through the kidneys because of an osmotic diuresis.

This can happen because of uncontrolled diabetes mellitus, when too much glucose builds up in the blood; during recovery from acute kidney failure, when urea builds up; or during treatment with mannitol - an osmotic diuretic.

But bear in mind that even though all of these situations can cause hypernatremia, they don’t always cause hypernatremia, because there’s usually a physiologic compensatory response that lowers blood osmolality by engaging the hypothalamus and the pituitary, as well as the kidneys.

The hypothalamus has osmoreceptors that sense changes in blood osmolality.

One response to high blood osmolality is thirst, with the thirst center also being located in the hypothalamus.

Another response is that the pituitary secretes antidiuretic hormone - or ADH - into the bloodstream.

When it reaches the kidneys, ADH binds to specific V2 receptors, and this makes the kidneys retain more water, in order to dilute the blood.

So usually, for hypernatremia to develop, along with water loss or sodium gain, the physiologic compensation might be out of order as well.

For example, there may be a hypothalamic lesion, insufficient ADH secretion, or a diminished thirst response which is common in elderly individuals.

In some individuals, a central nervous system lesion, like a tumor, may impair hypothalamic function more extensively, leading to both abolished thirst - called adipsia - and decreased ADH secretion.

This condition is called adipsic diabetes insipidus, and individuals suffering from it are prone to repeatedly developing hypernatremia because they lack the appropriate physiologic compensation for it.

Finally, while it may seem obvious, it’s worth mentioning that access to water and the ability to obtain and drink water are also crucial to prevent hypernatremia - so this condition more frequently affects people who don’t have access to drinking water - like those in extreme conditions, or those who depend on others for fluids, like infants, individuals in the ICU, and the elderly in nursing homes.

Sodium is the major determinant of serum osmolality - so this also leads to high blood osmolality - usually over 300 milliosmoles per kilogram.

Hypernatremia pulls water out of cells, so it causes intracellular dehydration.

Brain cells are particularly sensitive to water loss, so hypernatremia is mostly accompanied by neurological symptoms.

Acute hypernatremia causes neurological symptoms that range from lethargy, weakness, altered mental status and irritability, to severe symptoms, like seizures and coma - with severe symptoms usually occurring with a serum sodium above 160 milliequivalents per liter.

Acute hypernatremia rapidly pulls water out of brain cells, so the brain as a whole shrinks, and this this can rupture blood vessels and cause intracerebral and subarachnoid hemorrhages.

This leads to focal neurological findings like, say, muscle weakness or loss of sensation in the left arm, or right leg.

Chronic hypernatremia, on the other hand causes milder symptoms, because the process happens more gradually and so there isn’t the same rapid shift of water out of the brain tissue.

Finally, depending on etiology, symptoms of hypernatremia may also include polyuria and polydipsia - like in hypervolemic causes like diabetes insipidus and osmotic diuresis, or signs of dehydration - like orthostatic hypotension, decreased skin turgor, and dry mucous membranes like in gastrointestinal or skin losses of water.

Sometimes the cause of hypernatremia is obvious - like when there’s history of vomiting, diarrhea, excessive sweating, or extensive burns without proper fluid replacement.

But if there’s no clear cause, then volume status, urine osmolality, and sometimes urine sodium can help.

If an individual is hypervolemic, they clinically present with edema, and the cause is most likely sodium overload.

Since the kidneys function properly, they’ll respond to the high serum sodium by retaining more water and eliminating more sodium - so urine will be concentrated, meaning urine osmolality is usually above 600 milliosmoles per kilogram, and urine sodium will be high - usually above 100 milliequivalents per liter - reflecting that the kidneys are doing their job, and eliminating the excess sodium the best they can.