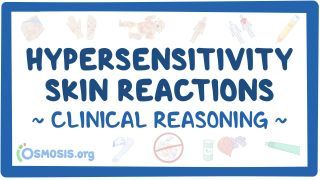 Hypersensitivity skin reactions are due to an exaggerated immune system reaction towards an antigen, and some reactions can be life-threatening.

Urticaria, also called hives, are slightly raised, well-defined wheals that are 1 millimeter to 10 centimeters in diameter. They’re usually red, blanch with pressure, are extremely itchy, and can pop up anywhere in the body.

The key feature is that these lesions come and go very rapidly - meaning one might appear on the leg as another disappears from the arm.

The reaction involves the epidermis and dermis layers of the skin, and the whole thing typically resolves within 24 hours.

One way is with in vivo skin prick tests, which is where small drops of up to 40 allergens, like pollens, fungi, animal dander, house dust mites, and various foods, are pricked into the skin on the forearm or upper back.

After that, if there are signs of urticaria within about 20 minutes, that implies that the substance is a trigger.

Unfortunately, it’s a bit uncomfortable and requires that the individual doesn’t take any antihistamines and doesn’t have any other skin diseases.

Occasionally, in addition to urticaria an individual might also develop angioedema, which can happen almost anywhere on the skin, like on the hands, feet, trunk and urogenital area, but it’s most common, on the face, like around the eyes or nose.

Before they leave, it’s important that these individuals should be given epinephrine autoinjectors that they can use right away if there’s a future attack.

Moving on, there’s erythema multiforme which affects the skin, usually the extremities, and mucous membranes, and it’s usually triggered by an infection like Herpes simplex virus or medications including penicillins, sulfonamides, ciprofloxacin, and anticonvulsants such as phenytoin and carbamazepine.

However, the most characteristic of all erythema multiforme lesions are targetoid lesions which are between 2 millimeters and 2 centimeters, and have central necrosis of the epidermis, surrounded by concentric rings of erythema, making them look like a bull’s eye or target.

The diagnosis of erythema multiforme is based on the classic skin rash along with the hemorrhagic crusting of the lips.

The involvement of the oral mucosa makes it hard for a person to eat and drink - leading to dehydration. So, part of treatment is maintaining good hydration which may include IV rehydration as well as pain control.

Now erythema multiforme is frequently self-limiting and requires no further treatment. If there is an underlying cause it should be dealt with - for example, an infection should be treated and an offending medication should be stopped.

Systemic corticosteroids can be used to help reduce inflammation.

In cases of recurrent bouts of erythema multiforme due to herpes simplex virus, continuous oral acyclovir or valacyclovir can be used for prevention.

Staphylococcus aureus produces exfoliative toxins that cleave adhesions between the epidermis and dermis, leading to the formation of bullae in a disease called bullous impetigo.

The cleavage plane is either subcorneal or within the upper stratum granulosum.