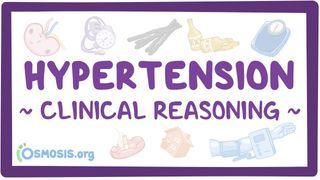 Hypertension, or high blood pressure, affects over a billion people around the world.

Typically, both systolic and diastolic pressures tend to rise or fall together, but that’s not always the case.

Ambulatory blood pressure monitoring is the best way to diagnose hypertension, but it’s not always feasible, so it’s usually done when office and home blood pressure measurements are really discordant from one another.

Now, the first step for an office blood pressure, is to make sure that the patient has rested for at least five minutes and is positioned properly - sitting with their arms and back supported, and their feet flat on the floor. And the measurement should be repeated at least twice.

Most of the time, blood pressure is taken in the brachial artery in the upper arm, because if the pressure is high there, it’s probably high throughout the arteries.

And keep in mind that just being in the office can cause blood pressure to change.

So, the diagnosis of hypertension should be done by looking at both office and out-of-office blood pressure measurements.

The second step is taking the patient’s history and physical examination.

Primary hypertension is way more common, and it generally isn’t accompanied by symptoms.

It’s sometimes called a “silent killer”, because over time, pressure in the arteries silently creeps up, and causes blood vessel damage which is a risk factor for serious problems, like myocardial infarctions, aneurysms, and strokes.

And some of these risk factors can be improved with lifestyle changes that can help reduce hypertension.

Now, secondary hypertension often is accompanied by a variety of symptoms associated with the underlying cause.

In general, the younger the patient, the more likely it’s secondary hypertension.

For example, anything that limits the renal blood flow can cause hypertension, like fibromuscular dysplasia, which generally affects young women, but also atherosclerosis in older patients. Other examples include obstructive sleep apnea, atherosclerosis, vasculitis, or aortic dissection, as well as pheochromocytoma, Cushing’s syndrome, and other endocrine disorders.

It’s also important to identify signs of end-organ damage, and whether the patient takes any medications or exogenous substances that can worsen hypertension, sympathomimetic agents like decongestants or even cocaine, cyclosporine or tacrolimus, sodium-containing antacids, stimulants like amphetamines, atypical antipsychotics like clozapine, antidepressants, oral contraceptives, erythropoietin, and even NSAIDS and liquorice - that delicious chewy black candy!

A basal metabolic panel and electrocardiography should be performed to screen for secondary forms of hypertension.

Management for hypertension is mainly based on the hypertension stage, risk of developing cardiovascular events and organ damage, as well as taking into account any concomitant diseases, such as diabetes or chronic kidney disease.

Lifestyle changes are crucial for all patients, especially in the long term, and include things like quitting smoking, drinking alcohol in moderation, maintaining a healthy weight, reducing dietary sodium, and staying physically active.

Not all patients with hypertension need antihypertensive drug therapy.

Specifically they need to have at least one of the following: cardiovascular disease, type 2 diabetes mellitus, chronic kidney disease, be over 65 years old, or have an elevated risk of coronary artery disease.