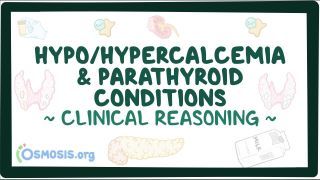 Transcript for Hypo/hypercalcemia and parathyroid conditions