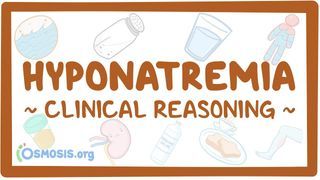 Hyponatremia means a lower than normal concentration of sodium in the blood, generally below 135 mEq/L.

However, since the concentration of sodium depends on both sodium and water levels in the body, hyponatremia actually translates as too much water in the extracellular compartment.

Both the intracellular and extracellular compartments have the same amount of solutes dissolved in that water - so the same osmolality, normally between 275 and 290 milliosmoles per kilogram.

Serum osmolality can be calculated using the formula: twice the concentration of sodium measured in milliequivalents per liter, plus the serum concentration of glucose divided by 18, measured in milligrams per deciliter, plus BUN, which stands for blood urea nitrogen, divided by 2.8, also in milligrams per deciliter - so if you remember one thing from this formula, it should be that sodium is the major determinant of serum osmolality.

Ok, now just to make matters more interesting, some of these solutes, like sodium and glucose, can’t freely cross cell membranes, so they generate an osmotic pressure inside the compartment.

This confers each compartment its tonicity - meaning how likely it is that compartment will draw water out of the other one.

Normally, the intracellular and extracellular compartment are isotonic to each other - meaning, they have the same concentration of osmotically active solutes.

However, small variations in solute concentrations, like having more sodium in the extracellular compartment, can alter that equilibrium, so water moves across cell membranes in order to restore the balance.

That being said, hyponatremia, or low concentration of sodium in the extracellular fluid and therefore the blood, can be caused by either losing more sodium than water, or gaining more water than sodium - and it can develop acutely, over less than 48 hours, or chronically, over more than 48 hours.

Now, according to serum osmolality, hyponatremia can be split in three categories.

The first category is when there’s low serum osmolality, below 280 milliosmoles per kilogram, and it confirms true hyponatremia.

True hyponatremia can be further divided into 3 subcategories of its own, depending on body volume status.

Typically this is seen in conditions like congestive heart failure, cirrhosis, or nephrotic syndrome - which all present with edema.

This can occur in conditions like diarrhea or vomiting, or in response to certain medications like diuretics.

Another more nuanced condition is cerebral salt wasting which is when an intracranial injury like meningitis disrupts the normal sympathetic nervous system stimulation of the kidneys leading to disproportionate loss of sodium - and, along with it, water.

A third subcategory is euvolemic hyponatremia, or normal volume hypovolemia, which is where there’s a normal body sodium with an increase in total body water - however, we call it “euvolemic” because there’s no edema.

Conditions that cause dilute urine include drinking too much water called polydipsia or beer which is called potomania, as well as the “tea and toast” diet - which is literally what it sounds like, hyponatremia in people who drink only tea and eat only toast.

The main condition that causes concentrated urine is syndrome of inappropriate antidiuretic hormone secretion, or SIADH for short.

This can happen because of conditions that mess up the brain’s ability to regulate the release of ADH, like strokes, hemorrhages or trauma, after surgery, and after treatment with some medications, like mood stabilizers or antiepileptics.

Inappropriate ADH secretion can also happen in the context of tumors that secrete ADH, of which small cell lung carcinoma is the most likely culprit.

Euvolemic hyponatremia with concentrated urine can also be seen in adrenal insufficiency and hypothyroidism.

Ok, now, back to serum osmolality, we’ve got two more scenarios - normal and high. Normal osmolality, between 280 and 285 milliosmoles per kilogram, point towards false hyponatremia, or pseudohyponatremia.

This is where the body water and sodium levels are normal, but there’s an excessive amount of lipids, like in hypertriglyceridemia, or proteins, like in multiple myeloma.

So check serum lipids to rule out hypertriglyceridemia, as well as serum and urinary proteins - to screen for multiple myeloma.

Finally, when serum osmolality is above 285 milliosmoles per kilogram, we call that hypertonic hyponatremia.

Such osmotically active solutes may be the excess glucose in diabetic ketoacidosis, mannitol, which is given in the treatment of cerebral edema, as well as glycine and sorbitol - which are used for irrigation during procedures like transurethral resection of the prostate or bladder, or laparoscopic surgery.

Ok, now, hyponatremia can cause symptoms like nausea, vomiting, and muscle cramps.

In severe hyponatremia, water moves within the brain cells, and they swell up, causing cerebral edema. This can cause confusion, coma and even death.

It can also cause increased intracranial pressure which can squash the blood vessels heading in and out of the brain causing ischemia, as well as possible brain herniation which can damage respiratory centers in the brain and cause respiratory failure.

So if these causes are excluded and we’re left with a low osmolality, then we have to figure out the cause of true, or hypotonic, hyponatremia. The first step is evaluating the volume status.

Individuals can be hypervolemic, hypovolemic, or euvolemic.

Hypervolemic individuals typically have edema, often around the ankles, as a result of renal failure, decompensated heart failure, cirrhosis, or nephrotic syndrome.

With renal failure, the kidneys are not working properly and they lose sodium in the urine, hence the urinary sodium above 20 milliequivalents per liter.

With extrarenal causes, the kidneys are perfectly capable of reabsorbing sodium, but the problem is a low effective circulating volume.

This triggers the activation of the renin-angiotensin-aldosterone system, and aldosterone acts on the distal convoluted tubule of the kidney, leading to sodium and water reabsorption, which is why the urinary sodium is below 10 milliequivalents per liter.

Now just to clarify some things - bear in mind that while nephrotic syndrome reflects a kidney ailment, it does not directly cause sodium waste, but rather loss of proteins in the urine, and the result is a low effective circulating volume.

Heart failure and cirrhosis also cause a low circulating volume, which is why they’re all lumped together.