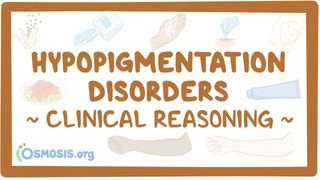 Hypopigmentation refers to an area of skin becoming lighter than the baseline skin color due to a decreased amount of melanin pigment in the skin, which is produced by melanocytes.

Its most severe presentation is depigmentation, in which there’s absence of all pigment.

Most causes of hypopigmentation are not serious, and diagnosis can be made based upon a detailed history and physical examination, taking into account the course of the disorder, and lesion morphology, distribution, pattern, and extent of hypopigmentation, as well as additional cutaneous and extracutaneous signs and symptoms.

Individuals may be examined under a Wood's lamp, which emits low wave ultraviolet A light that allows a better visualization of variations in skin pigmentation. This is done in a darkened room with the Wood's lamp held at 4 to 5 inches from the skin, to observe any subsequent fluorescence.

Hypopigmented lesions emit a bright blue-white fluorescence and appear sharply delineated - the brighter they appear, the lower the amount of melanin pigment.

Examination under a Wood's lamp is especially helpful in fair skinned individuals to identify hypopigmented or depigmented lesions that may not be visible to the naked eye.

Finally, cases where the diagnosis is uncertain may get a skin biopsy to evaluate the number and location of melanocytes and melanin in the affected skin areas.

One of the most common and well known hypopigmentation disorders is vitiligo.

The exact cause isn’t known, but there’s an autoimmune destruction of melanocytes, leading to complete depigmentation of well defined patches that can range in size from millimeters to centimeters and can sometimes expand and merge with other patches over time.

These patches are classified into two broad categories. There’s non-segmental vitiligo, which is the more common type that affects any age group, and it occurs at various locations that are mirrored on both sides of the body.

Non-segmental vitiligo may progress and ultimately involve the whole body, which is called universal vitiligo.

And there’s also segmental vitiligo, the least common type of vitiligo, which mostly affects children, and occurs in segments along a single spinal nerve typically on only one side of the body without crossing the midline, particularly in the face following the trigeminal nerve.

The diagnosis of vitiligo is typically based on the appearance of depigmented patches, as well as using a Wood’s lamp.

A skin biopsy is not routinely required for the diagnosis of vitiligo.

However, the examination of a skin biopsy that includes the lesion border and an adjacent, uninvolved area of skin, reveals complete loss of melanin pigment in the epidermis and absence of melanocytes, with occasional lymphocytes at the advancing border of the lesions.

The treatment for vitiligo should be set based upon the individual's age and skin type, the extent, location, and degree of disease activity, and the impact of the disease on the quality of life.

The goals of treatment include the stabilization of active disease and the repigmentation of depigmented patches, minding that the response to treatment is slow and may be highly variable.

In limited vitiligo, so when the affected area is smaller than 10 percent of the body surface area, cosmetic cover up and topical immunosuppressants can be applied directly to skin once daily for two to three months and then interrupted for one month.

For individuals with limited vitiligo who do not respond to topical therapies, or when the affected area is larger than 10 percent of the body surface area, other treatments can be tried.

Due to its lack of systemic toxicity and its good safety profile in both children and adults, narrowband ultraviolet B phototherapy is the initial treatment of choice for individuals with vitiligo involving more than 10 percent of the body surface area.

Low-dose oral corticosteroids are generally utilized for the stabilization of rapidly progressive vitiligo, often in combination with phototherapy.

Individuals with localized depigmented areas that have been unresponsive to medical intervention may get transplantation procedures with skin grafts or autologous cell cultures.

Finally, individuals with extensive vitiligo may choose to depigment the unaffected skin areas with topical drugs like monobenzone, which causes permanent destruction of melanocytes and induces depigmentation locally and remotely from the sites of application.

Another well known hypopigmentation disorder is oculocutaneous albinism, which is a congenital condition that is defined by a drastic reduction or complete lack of pigmentation in the hair, skin and eyes.

Symptoms of albinism can be seen in the coloring of hair, irises, and skin.

Coloring can range from drastically reduced pigmentation to white hair; milky white skin; and very light blue or translucent irises, which appear pink or red because of the retinal tissue lining the back of the eye.

An absence of melanin in the eyes can lead to a variety of vision problems ranging from focusing and depth perception to nystagmus and amblyopia which is when there’s misalignment of the eyes.

Diagnosis is typically made based on physical and ophthalmologic examination, as well as genetic testing to confirm diagnosis and determine which gene is mutated.

There is no cure for albinism, so treatment centers around preventing additional ailments that may occur from a lack of protection melanin normally provides.

So, that means wearing tinted glasses to protect eyes, and sunscreen to counter an increased risk of skin cancer, as well as lifelong regular skin examination at 6 to 12 month intervals for early diagnosis and treatment of skin cancer.

Individuals should also get comprehensive eye examination early in life, and treatment of refractive errors with glasses or contact lenses.

Ophthalmic follow-up within the first two years of life may be required at 3 to 6 month intervals to maintain appropriate optical correction.

The frequency diminishes until school age, when annual eye examination is recommended.

Some forms of albinism may be helped with medications that increase tyrosine levels; and others may be helped by low-vision aids if eyesight is also affected.

Last but not least, since albinism may cause psychological impairment, there are a number of support groups and information sources available.

Sarcoidosis is an immunologic disorder that results in lots of small nodules forming throughout the body.

The granulomas in sarcoidosis are noncaseating, which means that there is no tissue necrosis at the center of the granuloma.

Sarcoidosis can involve nearly every organ, causing a variety of generalized symptoms like fevers, weight loss, and fatigue.

In addition, there can be specific symptoms depending on which part of the body is most affected - ranging from shortness of breath and coughing, to tender leg nodules, to vision changes.

It presents with well demarcated round to oval patches or barely raised plaques, 1 to 10 millimeters in diameter, most often located on the trunk and face.

Erythematous or skin-colored papules may be present in the center of some lesions, giving a "fried egg" appearance.

Now, sarcoidosis most often involves the hilar lymph nodes, which are the lymph nodes that are near the point where the bronchi meets the lung.

That’s why a diagnosis of sarcoidosis usually includes a chest x ray or CT scan to look for bilateral hilar lymphadenopathy.

The best way to diagnose sarcoidosis is to do a biopsy.

And since sarcoidosis may affect virtually any organ or tissue, cutaneous sarcoidosis should be evaluated with further testing for the possibility of systemic disease.

Treatment depends on the severity of the disease and organs involved.

People with sarcoidosis who have minimal symptoms don’t need treatment because most symptoms resolve spontaneously within a few weeks, and complete remission from sarcoidosis typically happens within a few years.

Most people only require symptomatic treatment with non-steroidal anti-inflammatory drugs or NSAIDs to reduce inflammation.

Individuals with mild localized cutaneous sarcoidosis may apply topical corticosteroids, but if there are severe systemic symptoms - such as neurological, heart, and sight-threatening disease; those with serious pulmonary symptoms or worsening lung function; and those with kidney involvement - immunosuppression with oral corticosteroids is typically the first line treatment to control the disease.

Individuals whose disease does not respond to steroids or who can’t tolerate them, may get steroid-sparing agents, such as azathioprine, methotrexate, mycophenolic acid, and leflunomide as alternatives, and more specifically, cutaneous disease may be successfully treated with antimalarials, such as chloroquine and hydroxychloroquine.

Idiopathic guttate hypomelanosis is a very common and benign condition characterized multiple small, scattered, discrete, round or oval-shaped macules 2 to 6 millimeters in size that are lighter than the surrounding skin.

The surface of lesions is usually smooth but may be occasionally scaly.

These lesions appear mostly, but not only, on sun exposed regions, so one hypothesis is that they result from chronic ultraviolet exposure in combination with the normal aging process. Also trauma is regarded as a triggering factor.

Lesions usually do not increase in size, but their number may increase with age, and spontaneous repigmentation has not been observed, so they keep accumulating.

The diagnosis of idiopathic guttate hypomelanosis is generally made clinically by physical examination alone.

Biopsies can be done, but are usually unnecessary.