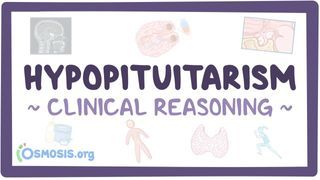 Hypopituitarism refers to the decreased secretion of one, some, or all of the anterior pituitary hormones, and it usually happens when there’s a pituitary or hypothalamic disease.

The hypothalamus and the pituitary work together to make 5 different hormones.

ACTH makes the adrenal glands release cortisol, a hormone in charge of the stress response and keeping blood pressure and blood sugar in the normal range.

Thyroid hormones speed up the basal metabolic rate in all cells, so it keeps cellular processes going at an optimal rate.

Fifth, the anterior pituitary makes one hormone without the help of the hypothalamus - that’s prolactin.

Prolactin secretion is important in females, where is plays a role in breast milk production.

Ok, so that being said, the clinical presentation of hypopituitarism varies, depending on which pituitary hormones are deficient.

ACTH deficiency may present with mild symptoms, like orthostatic hypotension and reflex tachycardia, weakness and lethargy.

Sometimes mild symptoms of ACTH deficiency can worsen during periods of stress, like illness or during surgery, and precipitate an adrenal crisis - which is when individuals have vascular collapse and shock, nausea, vomiting, abdominal pain and mental status changes ranging from confusion to coma.

When ACTH deficiency is suspected, an 8 AM serum cortisol level and serum ACTH should be obtained.

When serum cortisol is between 3 and 18 micrograms per deciliter, an ACTH-stimulation test can be done to confirm the diagnosis.

This is when the individual is given 250 micrograms of Cosyntropin, which is the synthetic analog of ACTH, and serum cortisol is measured one hour later.

Next, there can be a TSH deficiency, and the individual will have symptoms of hypothyroidism, like fatigue, cold intolerance, bradycardia, decreased appetite, and constipation, as well as dry skin and a puffy face. The diagnosis is based on having a low serum T4 level.

Growth hormone deficiency is more obvious in children, who present with short stature and failure to thrive - meaning, low height and weight for their age.

In adults, it can cause a decrease in bone mineral density and muscle mass, and an increase in fat content. Because these are so vague, in adults, growth hormone deficiency is usually screened for when other pituitary hormones are deficient.

Low serum IGF-1 levels indicate a growth hormone deficiency, but it needs to be confirmed. One way to do that is using the arginine-L-Dopa combination test.

This involves administering 30 grams of arginine hydrochloride in a 10% solution, which is given as an infusion over 30 minutes. At the start of the infusion, 500 milligrams of levo-dopamine are given orally. Serum growth hormone is sampled right before the infusion starts, and then 30, 60, 90, and 120 minutes later.

Additionally, blood work in adults with growth hormone deficiency may have dyslipidemia, so high levels of total cholesterol and LDL-cholesterol, as well as increased inflammatory markers like a CRP and fibrinogen, all of which increase the risk of cardiovascular events.

Now for the reproductive hormones. First, FSH and LH deficiency results in decreased sex hormone production in both females and males, with different consequences.

In females who have already gone through menopause, these symptoms may not be present, because the ovaries are already at rest.

Males can have infertility, as well as a decreased libido, low energy, in severe cases, they can also have hot flashes.

Finally, moving on to prolactin deficiency, it causes an inability to lactate after delivery. In fact, this is a clinical cue for Sheehan’s syndrome, which is pituitary necrosis following delivery, in postpartum women.

Serum prolactin levels are typically not measured, because what’s considered a normal level, can vary from person to person. As a result, the clinical definition of prolactin deficiency is a postpartum female who can’t lactate.

These deficiencies occur because of an issue with the pituitary, or when both the hypothalamus and the pituitary are injured.

Most frequently, hypopituitarism develops over a long period of time, and pituitary hormones tend to become deficient in the opposite order in which they’re needed for survival. Think about it this way - if you were running from a pack of kangaroos across the Australian desert, reproduction and normal growth and development would probably be the last things on your mind.

So in chronic hypopituitarism, the first signs are those of gonadotropin deficiency, like decreased libido, infertility and menstrual irregularities in females, and growth hormone deficiency - like short stature and changes in body composition.

In postpartum females, prolactin deficiency would translate as an inability to produce breast milk.

What you really need to stay ahead of those kangaroos are thyroid hormones - to accelerate cellular processes, and cortisol, to increase your blood pressure and blood sugar, and give you a boost for the run.

So only after a long period of hypopituitarism, will there be signs of TSH and ACTH deficiency.

The most common cause of hypopituitarism is a pituitary macroadenoma, which is a benign tumor of the pituitary larger than 1 centimeter.

Non-endocrinologic symptoms of a macroadenoma include compression symptoms, like headache and visual impairment. These symptoms typically trigger obtaining a head MRI to identify the tumor.

On an unenhanced or non-contrast MRI, normal pituitary tissue has a greater signal intensity than brain tissue - so it looks whiter.

Identifying a macroadenoma warrants testing for pituitary hormone deficiencies, even in the absence of symptoms, so serum cortisol, ACTH, and an ACTH stimulation test should be obtained to screen for secondary adrenal insufficiency, as well as serum T4 to check for secondary hypothyroidism.

Additionally, IGF-1 levels and an arginine-L-DOPA stimulation test could spot a growth hormone deficiency, and reproductive hormones FSH, LH, estradiol and testosterone should be checked to look for reproductive function.

Serum prolactin levels should also be determined in this situation. This isn’t done to screen for prolactin deficiency, because in that setting the results can vary from person to person, but rather for prolactin excess.

See, sometimes macroadenomas that derive from lactotrophic cells secrete excess prolactin, even though they compress the rest of the pituitary and cause other pituitary hormone deficiencies.