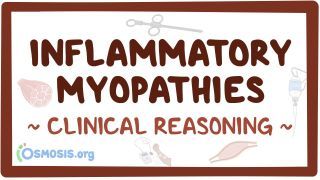 They’re all autoimmune disorders that cause muscle inflammation, leading to progressive muscle weakness and wasting.

Sometimes, the muscles can be tender or painful. In severe cases, it can involve the respiratory muscles, which can be life threatening.

There can be subcutaneous calcification in the skin; joint pain and arthritis; cardiovascular conditions like arrhythmias, myocarditis, and pericarditis; gastrointestinal conditions like gastroesophageal reflux disease and dysphagia; respiratory problems like aspiration pneumonia; and vascular problems like Raynaud’s phenomenon, where arterial spasm causes reduced blood flow to the fingers.

Let’s start off with polymyositis, which typically affects adults, and it’s characterized by bilateral muscle weakness that mostly affects proximal, large muscle groups, like the shoulder or hips and spares the distal muscles like muscles in the hands.

Individuals might have difficulty rising from a chair, lifting their arms, or climbing stairs.

The muscle weakness usually worsens gradually over several months, and over time there can be muscle atrophy.

Dermatomyositis has the same muscular presentation as polymyositis, but it mainly affects children, and in addition to muscle weakness, children can have a skin rash.

One type of rash is the heliotrope or lilac rash, which is a pruritic purplish rash that can appear on or around the eyelids.

A similar rash may appear on sun-exposed areas, like the chest, shoulders, or thighs.

This rash is similar to the malar rash of individuals with lupus, but it typically extends beyond the nasolabial folds, which is a region that’s usually spared in lupus.

Another rash is one that causes Gottron’s papules, which are flat, red, scaly papules, typically located on bony prominences, especially on hands, elbows, and knees.

Next, there’s inclusion body myositis which is the most common inflammatory myositis in individuals older than 50 years.

There’s usually a slowly progressive weakness and wasting of both distal and proximal muscles - especially involving the quadriceps, the wrists and fingers, and the muscles that lift the front of the foot.

In inclusion body myositis, the involvement may not be bilateral.

The most frequent initial complaint is weakness of grip strength, like having difficulty opening jars.

Individuals may also have difficulty getting up out of a chair or have frequent falls. Sometimes there’s also mild muscle pain.

In individuals with gradually progressive muscle weakness, an inflammatory myopathy should be suspected.

There can also be elevations in muscle enzymes like creatine kinase, lactate dehydrogenase, aldolase, and also the AST and ALT; and a complete blood count may also show anemia of chronic disease.

Then, electromyography can be done on affected muscles to detect regions of dead muscle cells that cause abnormal electrical signal conduction and evidence of muscle membrane irritability.

An MRI can show large areas of muscle inflammation, edema, fibrosis, and calcification.

Ultimately, a muscle biopsy is usually done to help with the diagnosis.

Inclusion body myositis is called that because there are inclusion bodies made of amyloid plaques that collect within the muscle fibers.

Five criteria are used to diagnose polymyositis and dermatomyositis.