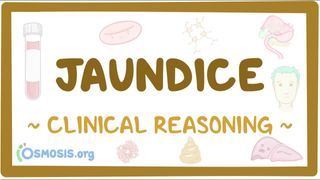 Jaundice -also called icterus- is the yellowish pigmentation of the skin and sclera- and appears when total bilirubin levels exceed 2 mg/dL in adults.

A workup for jaundice includes total and conjugated bilirubin, AST, ALT, and alkaline phosphatase, which are markers of liver injury.

In addition, albumin, PT, PTT, and INR which are markers of hepatocellular function are done.

Common prehepatic causes of excess unconjugated bilirubin include hemolytic anemia and dyserythropoiesis- which is macrophages inappropriately destroy too many red blood cells. These show anemia, an elevated LDH, a decreased haptoglobin, and can show schistocytes on a blood smear.

Now, if the additional lab work comes back normal, then the cause of this jaundice may be hepatocellular.

One example of this is Gilbert syndrome, which is a genetic condition that causes a decrease in the enzyme uridine glucuronyl transferase. As a result, hepatocytes are less effective at conjugating bilirubin. Individuals are usually asymptomatic, but when there’s a trigger like fasting - adipocytes release a lot of unconjugated bilirubin and that can overwhelm the hepatocytes.

Usually during an episode of jaundice, the unconjugated bilirubin doesn’t rise above 3 milligrams per deciliter and it resolves within 24 hours after resuming a normal diet.

Usually, laboratory tests repeatedly show normal results between jaundice episodes over 18 months. In some cases, the diagnosis can be confirmed with genetic testing.

There is no specific treatment required for Gilbert syndrome other than maintaining a normal caloric intake.

One example of this is Dubin-Johnson syndrome which is a benign genetic condition that causes a decrease in bilirubin transport out of the hepatocyte. As a result, conjugated bilirubin accumulates. Individuals present with mild jaundice, that’s usually noted only during illnesses, pregnancy or after using certain medications, like oral contraceptives- because they reduce bilirubin excretion and raise bilirubin levels. Serum total bilirubin levels are usually between 2 and 5 milligrams per deciliter and almost half of this is made up of conjugated bilirubin.

In order to diagnose Dubin-Johnson syndrome, we have to check the urinary coproporphyrin excretion- which is normal in quantity, but not in quality.

Coproporphyrin comes from heme synthesis and has 4 isomers that are numbered from I to IV.

Although it’s not usually done, if a liver biopsy is done, the tissue appears black from a pigment that’s similar to melanin. No specific treatment is required.

Another example is Rotor syndrome which is another benign genetic condition that causes defects in proteins that normally transport bilirubin from the blood into the liver for storage and excretion. The defective proteins lead to an accumulation of conjugated bilirubin. Individuals usually have mild jaundice and the total bilirubin is usually high, but usually below 5 milligrams per deciliter.

To differentiate Rotor syndrome from Dubin-Johnson syndrome, urinary coproporphyrin excretion is measured and with Rotor syndrome, this is normal. Once again, no specific treatment is required.

Now, if both total and conjugated bilirubin levels are high and there is also evidence of liver injury, especially high levels of AST, ALT and no evidence of liver dysfunction, then jaundice is still likely due to a hepatocellular cause, with a variety of possibilities.

At this point, an additional workup is done, like hepatitis B serologies, anti-HCV antibody for hepatitis C, serum iron, transferrin and ferritin for hemochromatosis, ceruloplasmin for Wilson disease, antinuclear anti-smooth muscle and anti-liver-kidney microsomal antibodies for autoimmune hepatitis and antimitochondrial antibodies for primary biliary cholangitis.

An abdominal ultrasound is also done to identify liver steatosis, if alcoholic hepatitis or non-alcoholic fatty liver disease is present.

If conjugated bilirubin levels are high - which will also lead to high levels of total bilirubin- and there’s also evidence of liver injury, especially high alkaline phosphatase levels and no evidence of liver dysfunction, then jaundice is most likely posthepatic and this is usually caused by a biliary obstruction.

Okay, now, biliary obstructions are usually caused by stones and this happens with choledocolithiasis and acute cholangitis, which is an infection behind the blockage. An abdominal ultrasound is done and this shows dilated bile ducts.

With choledocolithiasis, magnetic resonance cholangiopancreatography is done to confirm the diagnosis and then ERCP is done to remove the stones.

With acute cholangitis, ERCP is done immediately to locate and remove the stones.