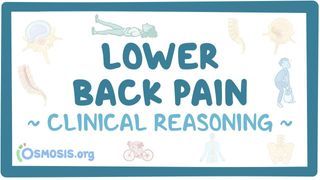 Transcript for Lower back pain

Finally, tuberculous osteomyelitis, or Pott’s disease is treated with the RIPE regimen: rifampin, isoniazid, pyrazinamide, and ethambutol for 2 months, followed by isoniazid and rifampin only for the remaining duration of treatment, which ranges from 9 to 12 months.