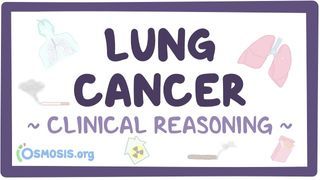 Lung cancer is the leading cause of cancer death worldwide in both males and females.

Small cell lung cancer are centrally located in the lung.

Non-small cell lung cancer is further subclassified into four subtypes, the most common one is adenocarcinoma, which usually develops at the periphery of the lung.

There’s also the term bronchoalveolar carcinoma which refers to adenocarcinoma-in-situ, which is where the adenocarcinoma tumor isn’t quite as aggressive and hasn’t yet crossed the basement membrane.

The other 3 subtypes of non-small cell cancer include squamous cell carcinoma and carcinoid tumors; which are usually centrally located, as well as the rare large-cell carcinoma; which can be located either centrally or peripherally.

Now the most important risk factor for the development of lung cancer is tobacco smoking, which accounts for more than 90% of cases. This usually comes in the form of cigarettes, but also includes cigars, pipes, and hookah, also called shisha.

There is a dose-dependent linear relationship between the pack-years - the number of cigarette packs per day times the number of years of smoking - and the risk of lung cancer.

Second-hand smoking, which is involuntarily inhaling tobacco smoked by other people, also increases the risk of lung cancer.

Additionally individuals exposed to asbestos for a long period of time such as those working in the shipbuilding or construction industry, are also at increased risk.

Although classically associated with mesothelioma, which as a malignancy of the pleura, asbestos more commonly causes adenocarcinoma.

Other risk factors include radon exposure, which is found in high concentrations in basements, as well as exposure of chest radiation, such as in the treatment of lymphoma.

Now, individuals with lung cancer typically present with symptoms or are asymptomatic but have a suspicious nodule that’s found incidentally on chest imaging.

Okay, the symptoms of lung cancer can be broadly classified into 5 categories.

The first category includes local symptoms - like cough, hemoptysis, and shortness of breath. If the airway is obstructed by a growing tumor, then a person can also develop recurrent infections distal to the obstruction.

The third category is local invasion, which are symptoms from the tumor damaging surrounding mediastinal structures.

For example, a tumor that pushes up against the superior vena cava, can cause SVC syndrome - where there’s shortness of breath and swelling of the face and arm.

Pancoast tumors, which are usually non-small cell lung cancers located peripherally in the apex of the lung, can push up against the brachial plexus, causing shooting arm pain and weakness.

If the tumor invades into the pleura, then it can result in a pleural effusion, causing shortness of breath, pleuritic chest pain, and dullness on percussion.

The fourth category are symptoms due to distant metastasis.

Lung cancer typically metastasizes to the brain, causing headaches and vomiting, the bone; which can cause pain or fractures, the liver, which can cause abdominal pain, or the adrenal gland; which is usually asymptomatic, but can cause adrenal insufficiency.

And the fifth and final category are symptoms due to paraneoplastic syndromes, which can clue you towards a specific subtype of lung cancer.

Usually the muscle weakness improves as an individual uses the affected muscle group, differentiating it from myasthenia gravis which has the opposite pattern.

Small cell lung cancer can also cause the production of antibodies against Hu-antigens which are found on neurons.

If cerebellar neurons are mainly affected, it leads to symptoms like ataxia and nystagmus.

Large-cell carcinoma can produce the beta subunit of human chorionic gonadotropin, or beta-hcG, which can cause gynecomastia in males or galactorrhea in females.

Finally, carcinoid tumors can secrete serotonin, causing carcinoid syndrome, which can lead to symptoms like flushing, wheezing, dizziness, and diarrhea.

The serotonin can also induce fibrosis of the mitral and aortic valves. Often, elevated serotonin levels can be detected by screening the urine for a metabolite of serotonin, 5-hydroxyindoleacetic acid, or 5-HIAA.

In someone with symptoms of lung cancer, the first step is usually a chest x-ray. If there’s evidence of a pleural effusion, then a diagnostic thoracentesis can be done to obtain a sample of the pleural fluid.

The fluid may have malignant cells, and if it does, then it means that the lung cancer has invaded into the pleura, which is a hallmark of metastatic cancer, and that has a poor prognosis.