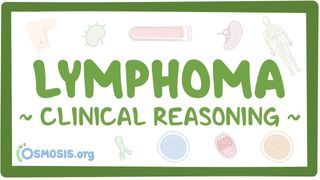 Lymphoma is a malignancy of lymphocytes - that is B-cells, T-cells, and natural killer cells - that usually involves the lymph nodes, or other lymphoid structures like the tonsils and the spleen.

Lymphoma is considered the most common hematologic malignancy in adults.

If there’s an enlarged lymph node, so lymphadenopathy, it’s important to see if it’s tender and if it’s mobile.

In reactive lymphadenopathy due to an infection, the lymph node is typically tender and mobile.

In malignancy, lymphadenopathy can also be accompanied by “B” symptoms, which are caused by cytokine release, and include a fever, drenching sweats, and an unintentional 10% weight loss within six months.

If malignancy is suspected, an excisional lymph node biopsy should be done to assess the tissue architecture of the lymph node, because the hallmark of lymphoma is a disruption of this lymph node architecture. This is done by completely removing the entire lymph node surgically.

A fine needle aspiration, or FNA of the lymph node is inadequate for making the diagnosis, because an FNA is just poking a needle into the lymph node, and aspirating or pulling out lymphocytes. And any individual lymphocyte in lymphoma could look completely normal.

If the excisional biopsy confirms that there’s a lymphoma it’s generally classified as a Hodgkin lymphoma or non-Hodgkin lymphoma based on the presence or absence of Reed-Sternberg cells.

Reed-Sternberg cells have a bilobed nucleus and a surrounding clear space!

Once the diagnosis of Hodgkin lymphoma or non-Hodgkin lymphoma is made, the next step is to do staging using positron emission tomography combined with a computed tomography, or PET/CT scan of the chest, abdomen, and pelvis. This is done by giving the patient an intravenous bolus of radiolabeled glucose, called fluorodeoxyglucose, or FDG.

Highly metabolically active cells, like lymphoma cells, take up FDG, and tissues and organs where those cells are located light up on the CT.

After imaging, the next step is applying the modified Ann-Arbor staging system, which has four stages according to the number of lymph node regions involved and the side of the diaphragm the lymph nodes are on.

After the patient is staged, they’re subclassified into A, B, X, E, or S.

“A” means absence of additional symptoms, “B” is presence of B-symptoms, and X is bulky disease meaning that there’s a lymph node that’s greater than 10 centimeters in diameter.

Next, is E which is for a single contiguous extranodal site, which means involvement of a structure anatomically close to the involved lymph node, such as involvement of the lungs in a patient with mediastinal lymphadenopathy.

Patients can have more than one substage, for example, a patient with cervical lymphadenopathy with a lymph node that’s 12 centimeters in diameter and B-symptoms would be subclassified as stage 1 BX.

In addition to the imaging studies, aspiration and biopsy of the bone marrow may be done, especially if a lymph node isn’t easily accessible, like a retroperitoneal lymph node.

Now, Hodgkin lymphoma arises from B-cells in the germinal center of lymph nodes.

Classical Hodgkin almost always has Reed-Sternberg cells which are positive for the cell surface markers CD15 and CD30, and negative for CD20 and CD45.

From most to least common, they are nodular sclerosing, mixed cellularity, lymphocyte-rich, and lymphocyte-depleted.

And popcorn cells are the opposite of Reed-Sternberg cells - they’re CD15, CD30 negative, and CD20, CD45 positive.

Hodgkin lymphoma cells also release cytokines that travel through the blood to the kidney where they damage the podocytes, causing minimal change disease, a nephrotic syndrome.

Key labs include a CBC which might reveal anemia of chronic disease, an elevated erythrocyte sedimentation rate, or ESR, and an elevated lactate dehydrogenase, or LDH It’s also helpful to get a BUN and creatinine as a baseline prior to starting chemotherapy.

Treatment of Hodgkin lymphoma depends on the stage and type.

Stages 1 and 2 are treated with a lower intensity chemotherapy regimen called ABVD, which includes adriamycin or doxorubicin, bleomycin, vinblastine and dacarbazine. In addition, localized radiotherapy targeting the involved lymph nodes can be used as well.

Stages 3 and 4 are treated with a higher intensity regimen called BEACOPP, which includes bleomycin, etoposide, adriamycin, cyclophosphamide, oncovin, which is the trade name for vincristine, procarbazine and prednisone. Additionally, since the popcorn cells in non-classical lymphoma are CD20 positive, rituximab which is an anti-CD20 monoclonal antibody can be used.

Patients with refractory or relapsed classical Hodgkin lymphoma can be treated with an anti-CD30 monoclonal antibody like brentuximab vedotin.

Hodgkin lymphoma generally has a good prognosis, but there are side effects of chemotherapy and radiotherapy. Examples include dose-dependent, irreversible cardiotoxicity due to doxorubicin, peripheral neuropathy due to vincristine, pulmonary toxicity due to bleomycin, hemorrhagic cystitis due to cyclophosphamide.