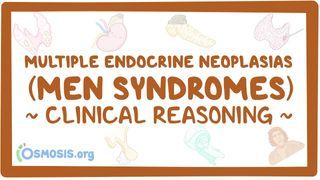 The multiple endocrine neoplasias, or MEN for short, are a group of inherited diseases which cause tumors to grow in endocrine glands, like the pancreas, pituitary, thyroid, adrenals, and parathyroid glands.

So in multiple endocrine neoplasias there’s overproduction of various hormones.

But the gastrinomas that occur in the pancreas, are actually more often found in the duodenum, so to keep things accurate 2 “p’s” and a “g” for gastrointestinal gastrinoma is better.

Now in MEN1, the most common tumors are parathyroid tumors which create excess parathyroid hormone. That leads to bone breakdown, which causes serum calcium levels to rise, and that allows calcium kidney stones to form. This is similar to what happens in an isolated parathyroid adenoma.

The key differences are that MEN1-associated hyperparathyroidism has an earlier age of onset, around 25 years, and tends to affect 3 or 4 of the parathyroid glands, rather than just one.

A silver lining is that MEN1 associated hyperparathyroidism almost never progresses to a malignant parathyroid cancer.

Management of hyperparathyroidism can be surgical or nonsurgical.

Surgery is indicated in individuals who meet at least one criteria in the biochemical, skeletal, renal, or age categories.

The biochemical criteria are a moderately elevated serum parathyroid hormone, and a serum calcium level that’s adjusted for albumin, of over 12 milligrams per deciliter.

Renal criteria are the presence of kidney stones, a glomerular filtration rate of less than 60 milliliters per minute and a twenty-four hour urinary calcium excretion greater than 400 milligrams per day.

Finally, surgery is recommended in individuals younger than 50 - and since MEN1 associated hyperparathyroidism usually debuts around age 25, surgery is the course of action in virtually all cases.

Surgery involves removing 3 and a half parathyroid glands, and leaving behind only about one half of the most normal-appearing glands which is about 50 milligrams of parathyroid tissue - that’s a tad bigger than a regular pea!

An alternative approach is to remove all the parathyroids from the neck, and transplant small fragments of parathyroid tissue into a person’s non-dominant forearm - specifically in a muscle pocket with their brachioradialis muscle.

That’s because in individuals with MEN1, hyperparathyroidism tends to recur after surgery, and this allows for a much easier surgical intervention in the future, which can be done under local anesthesia. Following surgery, individuals usually have their serum parathyroid hormone and calcium levels measured annually to screen for recurrent disease.

Now, the next most common type of tumor in MEN1 is a gastrinoma.

In MEN1, gastrinomas are often multifocal - and pop up mostly in the duodenum, but also in the pancreas.

Gastrinomas produce gastrin which increases the amount of hydrochloric acid in the stomach - and when that happens, it’s called Zollinger Ellison syndrome. Symptoms include gastroesophageal reflux and dyspepsia.

The diagnosis is confirmed with a serum gastrin level above 1000 picograms per milliliter in the presence of a gastric PH lower than 2. Checking the gastric pH is important to ensure that you’re not dealing with a high gastrin level in response to an inability to make hydrochloric acid, which is called secondary hypergastrinemia due to achlorhydria.

If a gastrinoma is suspected, an upper endoscopy should be performed to identify the location of the tumor and potential complications of hyperacidity, like peptic ulcers or Barrett esophagus, which is when the normal, squamous esophageal mucosa is replaced by columnar cylindrical epithelium, to better withstand the acid reflux.

But since MEN1 typically causes multiple gastrinomas, it’s also important to do further imaging with a CT or MRI scan, as well as a somatostatin receptor scintigraphy - or SRS. This is when Octreotide, a drug that’s structurally similar to somatostatin, is labelled with radioactive Indium-111 - and injected into a peripheral vein.

The radioactive Octreotide binds to tumor cells that express somatostatin receptors - like gastrinomas. Then a gamma camera is used to pick up the emitted radioactive signal, and it’s linked to a computer that processes those signals into a picture with a white background and black spots representing the areas with tumors.

Individuals with MEN1 associated Zollinger Ellison syndrome should be started on lifelong therapy with proton pump inhibitors - like omeprazole and pantoprazole, to control the acid secretion.

Surgery is not usually recommended because there are multiple tumors, but is sometimes done when tumors are larger than 2 centimeters.

Finally, the pituitary gland can also develop benign tumors called adenomas which usually make an excess amount of at least one of the many hormones that are produced there.

The tumor can be diagnosed by getting an MRI of the head, and symptoms depend on the type of hormones it produces.

Most commonly, there’s a prolactin or a growth-hormone secreting adenoma.

Now, with a prolactinoma, the excess prolactin causes galactorrhea, or milk production in females who aren’t breastfeeding, and gynecomastia, or breast tissue growth, in males.

If the tumor doesn’t respond to cabergoline, then radiotherapy combined with transsphenoidal surgery, which is when the tumor is removed through the nose, can be done.

Now if the pituitary adenoma secretes growth hormone, then that stimulates hepatic secretion of insulin-like growth factor-1, or IGF-1.

Excess IGF-1 causes gigantism in children, meaning they’ll get really tall, or acromegaly in adults where they have enlarged hands and feet, a large forehead, and a prominent jaw.

The diagnosis is made based on high serum growth hormone and IGF-1 levels.

Treatment here is transsphenoidal surgery - but, if the adenoma is the consequence of a pancreatic tumor, then that should be removed as well.