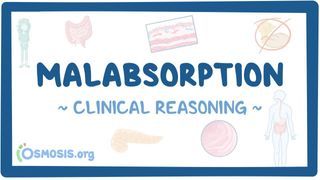 Malabsorption presents differently based on which nutrients are being malabsorbed, the severity of the disease, and the underlying cause.

To confirm that it’s really steatorrhea, a fecal fat test can be done to check for fat. If it’s negative and fat malabsorption is still suspected, then a 72 hours stool collection should be done because that’s the gold standard for diagnosing fat malabsorption.

To do that, an individual has to have a diet that includes 70 to 120 grams of dietary fat per day, which is the equivalent of eating about 300 grams of cheese per day. Stool is collected for 72 hours, and if there’s more than 6 grams of fat per day, then it’s considered fat malabsorption.

If fat malabsorption is present, then the fat soluble vitamins - A, D, E, and K, might also not be getting absorbed.

Vitamin A deficiency causes symptoms like night blindness and thickened skin due to hyperkeratosis.

Vitamin D deficiency causes symptoms like paresthesias, and fractures due to osteomalacia.

Vitamin E deficiency can cause symptoms like muscle weakness.

With protein malabsorption, edema and muscle atrophy may be present and on the lab tests, there may be hypoalbuminemia and a low total protein level in the blood.

With carbohydrate malabsorption, symptoms include watery diarrhea, flatulence, and bloating.

To identify carbohydrate malabsorption, the D-xylose test can be done. That’s where an individual fasts overnight and then eats 25 grams of D-xylose, which is a monosaccharide that’s normally absorbed by the small intestine. The serum D-xylose is checked after an hour and if it’s below 20 milligrams per deciliter that suggest malabsorption.

In addition, urine is collected over the next five hours as fasting continues, and if urine excretion of D-xylose is below 4.5 grams, then that also suggests malabsorption.

Usually, if the mean corpuscular volume or MCV is less than 80 femtoliters, then it’s microcytic and this usually happens with iron deficiency anemia.

With iron deficiency anemia, serum iron and ferritin are decreased and total iron binding capacity or TIBC is increased.

If the MCV is above 100 femtoliters, then a blood smear is necessary to see if the macrocytic anemia is megaloblastic. If so, vitamin B12 or folate deficiency is the most likely the cause, and can be confirmed by obtaining Vitamin B12 and folate levels.

Now, global malabsorption is caused by diseases that cause damage to the small intestine mucosa, reducing the surface area available for absorption.

A common cause of this is celiac disease -sometimes called celiac sprue- which is an autoimmune condition triggered by the gluten found in foods like wheat bread.

In addition celiac disease can cause iron deficiency anemia; and vitamin B12 and folate deficiency.

Celiac disease is also associated with dermatitis herpetiformis -which is a chronic skin condition, along with short stature, delayed puberty, and reduced fertility.

The diagnosis of celiac disease starts with checking for Immunoglobulin A anti-tissue transglutaminase antibody or TTGA IgA.

If TTGA IgA is positive, then an upper endoscopy with biopsy is done to look for evidence of damage, villous atrophy, and crypt hyperplasia in the duodenal mucosa.

If the TTGA IgA is negative, then total serum IgA levels are obtained. If they’re low, then TTGA IgG and deamidated gliadin peptide or DGP are checked. If either one of those is positive, then an upper endoscopy with biopsy is done.

Finally, many individuals who suspect having celiac disease can keep a food journal and can try to eliminate gluten from their diet to see if that improves symptoms.

Now, some individuals and groups are managed slightly differently. For example, those with a first degree relative with celiac disease, get an upper endoscopy with biopsy and have TTGA IgA levels checked. If both are normal, then celiac disease is unlikely. If either are positive, then total serum IgA levels, TTGA IgG, and DGP are obtained. In addition, Human leukocyte antigen testing or HLA testing is often performed when there seems to be a genetic predisposition, because HLA DQ2 and HLA DQ8 are both known to be linked with celiac disease.

Another group that gets managed slightly differently are children suspected of having celiac disease. Typically these children have classic symptoms of celiac disease, but may also have a failure to thrive or pubertal delay.

Now if the TTGA IgA level is above 3 times the upper limit of normal or if the EMA is positive, then an upper endoscopy with biopsy is performed. If histology suggests celiac disease, then the individual is placed on a gluten-free diet and if there is no clinical improvement, then HLA testing should be done to see if HLA DQ2 or DQ8 are present. However, if there is clinical improvement, then celiac disease is confirmed.

The main treatment of celiac disease is eliminating the trigger - gluten - from the diet. Because gluten is included in a variety of foods, it requires careful attention to ingredients when buying processed foods.

Typically, a gluten free diet improves symptoms within 2 weeks and after 6 weeks, the individual should have repeat lab testing including a complete blood count, folate, vitamin B12 level, iron studies, and TTGA IgA. There should also be a repeat upper endoscopy with biopsy, 6 months after being on a gluten free diet to make sure that there are signs of healing.

Another cause of global malabsorption is tropical sprue and it mostly occurs in a tropical region that includes Haiti, the Dominican Republic, Puerto Rico, and Cuba. The disease may be caused by a pathogen that hasn’t been identified yet. The individual typically has global malabsorption symptoms, like chronic or recurrent diarrhea - with steatorrhea, unintentional weight loss, abdominal distention, and bloating, as well as vitamin B12 and folate deficiency.

It’s a diagnosis of exclusion, that requires reuling out infectious and inflammatory causes of diarrhea. That includes doing stool testing for ova and parasites to look for Entamoeba histolytica or Giardia lamblia.