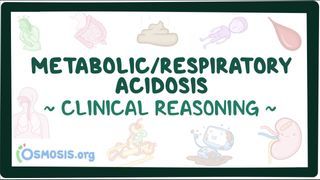 Transcript for Metabolic and respiratory acidosis

In metabolic acidosis, the blood pH is below 7.35, and it’s due to a bicarbonate or HCO3 concentration in the blood of less than 22 mEq/L.

With metabolic acidosis, the respiratory center is stimulated in order to compensate for the acidosis and the individual hyperventilates, leading to dyspnea.

In addition, associated symptoms are related to the underlying cause, for example, in diabetic ketoacidosis there’s nausea and vomiting.

First thing’s first. Serum chemistries are obtained including serum bicarbonate or HCO3, potassium, sodium and chloride in order to see if there’s any electrolyte imbalance, and BUN and Creatinine are checked to assess renal function.

The diagnosis is usually based on an ABG, and in addition to a pH below 7.35, and HCO3 levels below 22 mEq/L, if there’s respiratory compensation, the pCO2 levels will be under 35 mm Hg.

Additionally, we can verify if the respiratory compensation is appropriate by using Winter’s formula and comparing the calculated value with the measured pCO2 from the ABG.

So if the measured pCO2 is between 28.5 and 32.5, then there’s an appropriate respiratory compensation for the metabolic acidosis.

If the measured pCO2 comes back greater than 32.5, then there’s a metabolic acidosis and an associated respiratory acidosis.

And if the measured pCO2 is lower than 28.5, then there’s a metabolic acidosis and an associated respiratory alkalosis.

Generally, when pH levels are below 7.1, treatment is urgent and IV sodium bicarbonate or Tromethamine or THAM is given.

So, the formula is: the Anion gap equals sodium minus chloride plus bicarbonate.

The anion gap normally ranges between 7 and 13 mEq/L. The reason that it’s not 0, is that there are some unmeasured cations and anions, with the most prominent anion being albumin.

If there’s a high anion gap metabolic acidosis, the next step is to calculate the delta delta ratio to see if there’s another acid-base disorder that’s associated with the high anion gap acidosis.

The delta delta ratio sounds complicated, so let’s work through it.

It goes like this: the delta delta ratio equals the delta anion gap divided by the delta HCO3.

The delta HCO3 equals 24 mEq/L minus the measured serum bicarbonate.

Also in severe diarrhea, there can be prerenal acute kidney injury, leading to retention of unmeasured ions, which also increases the anion gap.

Now, when the delta-delta ratio is 1, there’s a straightforward high anion gap acidosis.

When delta-delta ratio is above 1, there’s either a coexisting metabolic alkalosis or chronic respiratory acidosis, both of which normally lead to an increase in HCO3.

But because a high anion gap metabolic acidosis diminishes HCO3 levels, it hides the coexisting metabolic alkalosis or respiratory acidosis.

Now, in order to differentiate a renal cause from other causes of normal anion gap metabolic acidosis- like diarrhea, the urine anion gap is calculated.

This is similar to the serum anion gap. It’s not 0, because there are some unmeasured anions and cations, but this time the most prominent cation is ammonium or NH4, which is the major acid excreted in the urine.

When the urine anion gap is a positive number- this suggests that the urinary NH4 level is low, meaning that the cause for the normal anion gap acidosis is likely renal.

When the urine anion gap is a negative number- this suggests that the urinary NH4 level is high, meaning that the cause for the normal anion gap is likely diarrhea.

If diarrhea is leading to a normal anion gap acidosis, then the underlying cause of the diarrhea is treated and fluid repletion is given with oral rehydration solutions or IV fluids. If a renal cause is identified then there are a few potential disorders to consider.

Type I renal tubular acidosis or type I RTA is a disorder where not enough hydrogen is excreted in the distal tubule due to an impaired hydrogen-ATPase.

Underlying causes are genetic conditions, autoimmune diseases like Sjögren's syndrome and rheumatoid arthritis, and hyperparathyroidism- especially in adults. Usually the urine pH is above 5.5, because hydrogen ions aren’t excreted, and the potassium level is below 3.5 mEq/L, because there’s potassium wasting to maintain electroneutrality in the renal tubules.

Sometimes, in addition to bicarbonate other substances don’t get reabsorbed as well, like phosphate, amino acids, glucose, and uric acid.

An example of generalized proximal tubule dysfunction is Fanconi syndrome.

Now initially, some of the bicarbonate that isn’t absorbed in the proximal tubule gets reabsorbed by the distal tubule, and the rest gets lost in the urine - raising the urine pH to above 7.5.

Now, over time, the serum bicarbonate falls to between 12 and 20 mEq/L. At that point, when there’s less bicarbonate in the serum, less gets filtered, and the distal tubule is able to reabsorb all of it, so the urine pH normalizes.

In type II RTA, the urine pH rises to above 7.5 once the bicarbonate threshold is exceeded- because the distal tubule can’t keep up with all that bicarbonate.

Type II RTA is treated with 10 to 15 mEq/ kilogram per day of oral sodium bicarbonate or sodium citrate.

Now giving lots of sodium bicarbonate can lead to hypokalemia because as more sodium and bicarbonate flows through the kidney, it stimulates more potassium excretion.

So to prevent hypokalemia, a potassium salt like potassium citrate is given.

Alternatively, a thiazide diuretic like hydrochlorothiazide can be used to increase reabsorption of bicarbonate in the proximal tubule.

Finally, if there’s hypophosphatemia, vitamin D and oral phosphates can be given.

Type IV renal tubular acidosis or type IV RTA is a disorder in which hydrogen ions are retained due to hypoaldosteronism. Since there’s not enough aldosterone, potassium gets retained as well, causing hyperkalemia.

Hypoaldosteronism can be due to primary adrenal insufficiency or certain medications, like ACE inhibitors, ARBs, NSAIDs, and calcineurin inhibitors.

So the treatment is to address the underlying cause and stop the offending medication.

A high anion gap acidosis - which is when the serum anion gap is above 13 mEq/L can happen with ketoacidosis, lactic acidosis, toxic ingestions, or uremia.

Let’s start with ketoacidosis- which is when metabolic acidosis is due to excess ketone bodies.

To confirm ketoacidosis, urine dipstick testing is usually done using either nitroprusside tablets or reagent sticks, with a 4 plus reaction being highly suggestive for ketoacidosis.

A better test is to look for high levels of beta-hydroxybutyric acid- which is a type of ketone body.