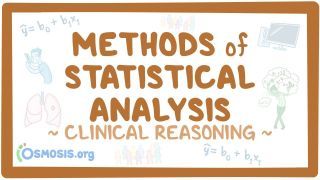 Transcript for Methods of statistical analysis

There are four basic types of statistical analyses commonly used in epidemiological research, and the analysis you pick depends on two main criteria.

The first criterion is the type of data you have, which can be either individual data or binned data, which is also called group data.

So, for example, let’s say we want to know how many people out of 100 people developed lung cancer the past 5 years.

With individual data, we have information about each person, so we can tell whether or not each of the 100 people developed lung cancer.

On the other hand, if we have group data, we don’t actually know which specific individuals out of the 100 people developed lung cancer.

So even though we know that 6 people had them, we don’t know which 6 people they were or any of their individual characteristics.

The second criterion is the type of outcome or y-variable you’re measuring, which can be either quantitative, categorical, or time to event.

Quantitative variables have a numeric value, like a person’s forced expiratory volume, which is the total amount of air, in liters, that a person can exhale in a single forced breath.

On the other hand, categorical variables have distinct levels.

For example, we could use a categorical variable to characterize if a person was diagnosed with lung cancer in the past five years or if they were not.

And finally, time to event variables describe how long a person was followed before the event or outcome occurred.

For example, if we started following a person at age 50 and they developed lung cancer at age 53, then their time to event would be 3 years.

Now, one of the simplest and most widely used types of analysis is linear regression.

Linear regression uses individual data, and the outcome variable is always quantitative, while the exposure variable can be either categorical or quantitative.

Typically, we use statistical software to calculate the linear equation, and the software will provide b0 and b1, which are two numbers we can then plug into the equation y-hat = b0 + b1x1.

Y-hat is the estimated value for the outcome variable, which in this case is FEV, and x1 is the value of the exposure variable, so in this case that’s the number of cigarettes a person smokes.

Now, b1 is the most important number for interpretation because it tells us the effect size, or how much the outcome variable changes for every one-unit increase in the exposure variable.

For example, a b1 of negative 0.1 means that, on average, the FEV will decrease by 0.1 liters per second for every one additional cigarette smoked per day.

One important thing to know is that linear regression can be used in any type of study design as long as the two criteria of individual data and quantitative outcome variable are met.

And more specifically, because there are only two levels for each variable, they’re called binary categorical variables.

Now, like linear regression, the statistical software will give us b0 and b1, and we can plug them into the same equation of y-hat = b0 + b1x1, but the interpretation of the beta-coefficients are different.

In logistic regression, the beta-coefficients represent the log-odds of the outcome occurring.

Since the log-odds can be a confusing interpretation, we can also convert these numbers to regular odds by exponentiating them by a base of e.

Logistic regression can be used for any type of study, but the interpretation changes slightly depending on the study design.

This type of study design allows you to measure the incidence or the risk, which is the number of new cases that occur over a certain period of time.

Now, in case-control studies, we can’t measure the incidence, since we’re selecting people that already have the outcome.

Instead, we’re measuring the prevalence, or the number of people that already smoked cigarettes before we started measuring them.

In case-control studies, we can use logistic regression to then calculate the prevalence odds ratio.